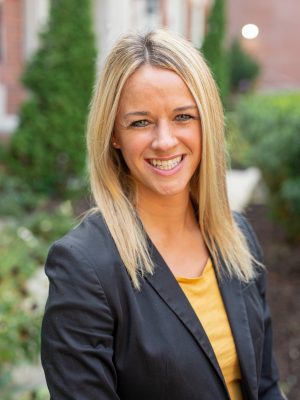 Kathryn “Kat” Lucchesi joined the Missouri School of Journalism in August 2019 as an assistant professor. She is the course coordinator for J4180/7180 News Content Creation and teaches J4820/7820 Social Media and Audience Strategy. She participates in several committees, including the Intercollegiate Athletics Committee as a Faculty Representative. She is a seasoned multimedia storyteller and digital strategist who has led communication teams for college athletic programs and private industry.

From 2018-2019, she practiced her storytelling skills at Stoller Wine Group, a company which leveraged economies of scale in the wine industry. As the Digital Marketing Director, she led the digital strategy for the five wine brands on social media, advertising, and content creation.

Prior to the wine industry, Lucchesi spent nine years in collegiate athletics. As the Director of Social Media for Oregon State University Athletics from 2016-2018, Lucchesi re-branded nearly 50 social media accounts and taught student-athletes personal branding. She was part of OSU’s ground-breaking Athletics Ideation Team, an innovative in-house creative agency that increased awareness about the Beavers’ brand, teams, student-athletes, and coaches. She also led a team of 15 interns and guided many of them into full-time positions after graduation.

In addition to her role as Social Media Director, Lucchesi participated in numerous committees on campus, such as the Diversity and Inclusion Working Group and the Fan Engagement Committee.

Before OSU, Lucchesi was the Multimedia Director for the Mizzou Football program for seven years. She launched a website for former Tigers head football coach Gary Pinkel, launched social media accounts, promoted brand awareness for the team, assisted in recruiting and supervised a student work force, among other duties.

Lucchesi also spent two years as an adjunct journalism professor at Missouri and for four years as a multimedia reporter, anchor and producer at KOMU-TV 8 in Columbia, Mo.

Lucchesi is a 2009 and 2016 graduate of The University of Missouri with a bachelor’s degree in journalism and an executive master’s of business degree. While not teaching, you can likely find her running on the MKT trail or at Ragtag Cinema catching up on movies.