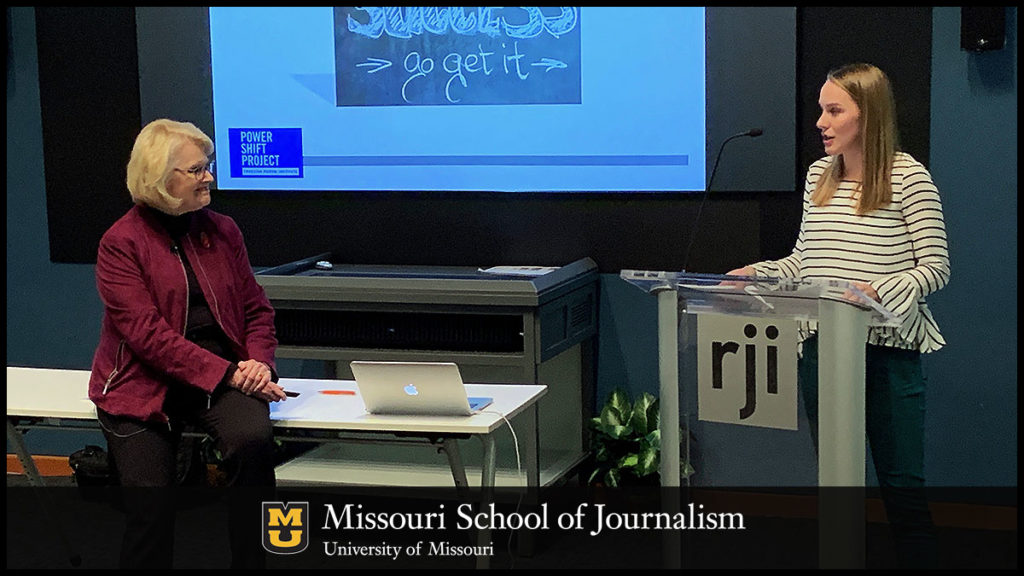 More than 80 Missouri Journalism staff and faculty participated in training as part of the Power Shift Project led by Jill Geisler, the Bill Plante Chair in Leadership and Media Integrity at Loyola University in Chicago and the Freedom Forum Institute Fellow in Women’s Leadership.

Columbia, Mo. (Dec. 12, 2019) — This fall, faculty and staff at the Missouri School of Journalism participated in training to fight against gender-based harassment and discrimination, and seek workplace integrity. The training was part of the Power Shift Project curriculum, an initiative of the Freedom Forum Institute.

More than 80 staff and faculty participated in at least one module of the multi-week workshop training, which “is built around three pillars of critical thinking, courageous conversations and building cultures of respect and trust,” according to the organization’s website.

The training was born out of the Power Shift Summit, which launched after news of harassment scandals broke in late 2017, said Jill Geisler, the Bill Plante Chair in Leadership and Media Integrity at Loyola University in Chicago and the Freedom Forum Institute Fellow in Women’s Leadership. The goal of the summit was to address how harassment is being handled and potential changes, according to a summit report. The training was part of the summit’s call to action, said Geisler.

The School of Journalism received funding for the training, which was held at the School, through a grant from the William Randolph Hearst Faculty Fellowship Program awarded to Associate Professor Amy Simons.

The Hearst grant is funding a two year, $150,000 grant awarded to the School and supports the school’s strategic plan. This Power Shift training is part of the School’s inclusion, diversity and equity work, said Simons.

One of Simons’ biggest takeaways from Power Shift was the critical thinking component of the training. It reminded her to think about all the statements people can say throughout their lives, she said, whether it’s about how someone is dressed, about a relationship that develops in the office or the role of HR in the prevention or mediation of harassment, as well as the assumptions and biases someone might have that they don’t realize they have.

“There’s a reason it’s called Power Shift,” she said. “It’s really about shifting the mindset of how we look at power differentials in workplace environments. Being much more mindful of them and how that power is exerted in a way to create a place that gives voice and gives presence to people who have traditionally been denied it.”

As someone who cares about equity in the workplace and wants to remind herself of the best equality terms and words to use, Assistant Professor Kathryn Lucchesi was inspired to attend all the training’s modules. Her biggest takeaway from the training was to always listen to everyone’s perspective, she said.

“Listening comes before telling and correcting because you need to gain trust and understanding in order for a conflict to become a resolution,” she said. “We all come from different backgrounds and different levels of experience, so listening to a person’s intention and mindset can help further a conversation.”

Although the training is still new and fresh in people’s minds, Simons said she’s already found herself in situations where she’s felt more prepared to step up and say something or provide an active bystander intervention when she sees something happening whether in person or online.

The training was geared to faculty and staff at the School of Journalism, however, there was one session intended to help student interns. Geisler walked students through their rights and what to be thinking about while working in an internship, how to seek out the HR department and how to identify who their allies might be in case of a problem.

“I help direct the Dow Jones News Fund data journalism program for Investigative Reporters and Editors at the school,” said Professor David Herzog, who also serves as an academic adviser to the National Institute for Computer-Assisted Reporting (NICAR). “As part of that program, we place university students in summer internships in professional newsrooms. Jill Geisler’s ‘Power to the Interns’ presentation was rich with guidance for faculty members like me who help place interns.”

Simons said they haven’t finalized plans for continuing the training next semester yet, however, other schools and departments at the University of Missouri have expressed interest to her in participating in the training.