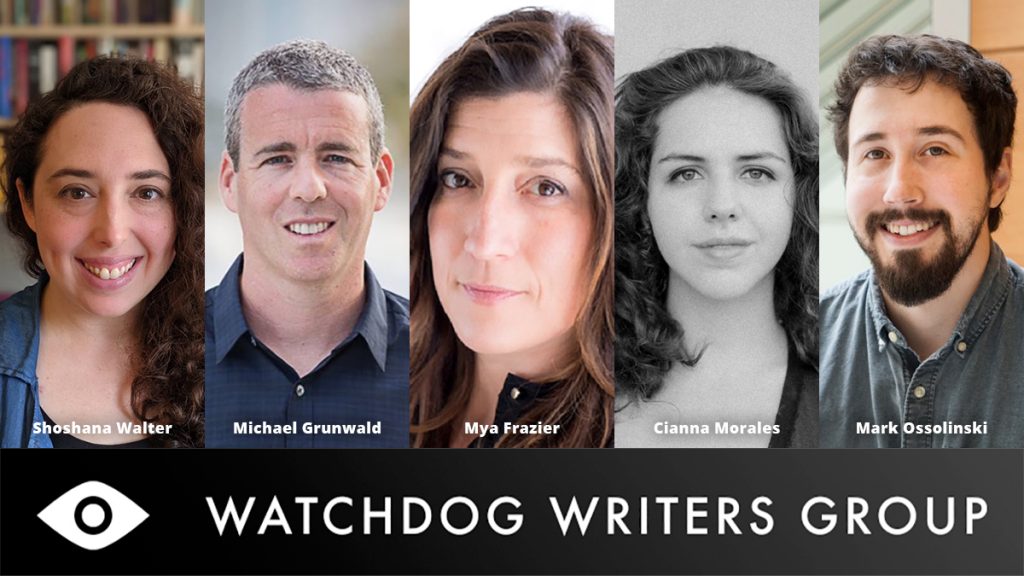 Authors and students will produce books and articles on climate change and agriculture, the big business of addiction recovery, and the America’s housing crisis and credit system.

The Missouri School of Journalism has selected its second class of authors to receive its Watchdog Writers Group fellowship, a $50,000 annual stipend that will allow the journalists to write a book and help mentor a student reporter at the university.

The new fellows are Shoshana Walter, a criminal justice reporter at the Center for Investigative Reporting and Reveal podcast; Michael Grunwald, a senior writer at Politico Magazine; and Mya Frazier, an independent reporter whose work has appeared in Bloomberg Businessweek, The New York Times Magazine and elsewhere.

Walter is writing a book that builds on her award-winning reporting for Reveal on unpaid work camps masquerading as rehab. Her book, “Untreated,” will chronicle the many problems plaguing the country’s addiction treatment system, how it got this way and how we could do better for the millions of people in the US struggling with addiction.

Grunwald is working on a book for Simon & Schuster about how to feed the world without frying the world. It’s about the food we eat, the farms that make the food, the forests that get cleared to make room for the farms, and the search for technological and political solutions that can prevent us from eating the earth.

Frazier is writing a book that expands on her recent investigation for The New York Times Magazine into America’s housing crisis and the credit reporting system. During the fellowship, she will research the relationship between class mobility and the credit system.

“We are so excited for this new class of fellows to build on the momentum started with last year’s inaugural class,” said Christopher Leonard, executive director of the WWG. “These authors are carrying forward the best traditions of investigative reporting and their projects are going to have a real impact.”

Walter, Grunwald and Frazier will each partner with a Missouri School of Journalism student who will help them report on the topics of their book, while also producing an original investigative story that will be published in a partner media outlet.

Walter will work with graduate student Cianna Morales, a graduate student at the University of Missouri studying investigative reporting and photojournalism. Morales, originally from Des Moines, Iowa, is assistant city editor at the Columbia Missourian newsrooms. Morales’s reporting interests center around health and the environment; arts and culture; and social justice.

Grunwald will work with graduate student Mark Ossolinski, who is studying investigative and public policy reporting. Ossolinski previously interned for the American Prospect and has covered state politics for the Columbia Missourian. This summer, Mark interned for the Missouri Information Corps, covering climate change in Missouri, and contributed reporting to the Midwest Center for Investigative Reporting.

Frazier’s student reporter will be assigned this fall.

The Watchdog Writers Group, established in 2019, has a dual mission: to financially support authors as they write a deeply reported nonfiction book in the public interest, while simultaneously training the next generation of young reporters. In June 2020, the program received a $1.1 million, three-year grant from the 11th Hour Project, the grant-making arm of The Schmidt Family Foundation. The WWG also receives generous support from the William T. Kemper Foundation in Kansas City, Mo.

More details about WWG can be found at watchdogwritersgroup.com.