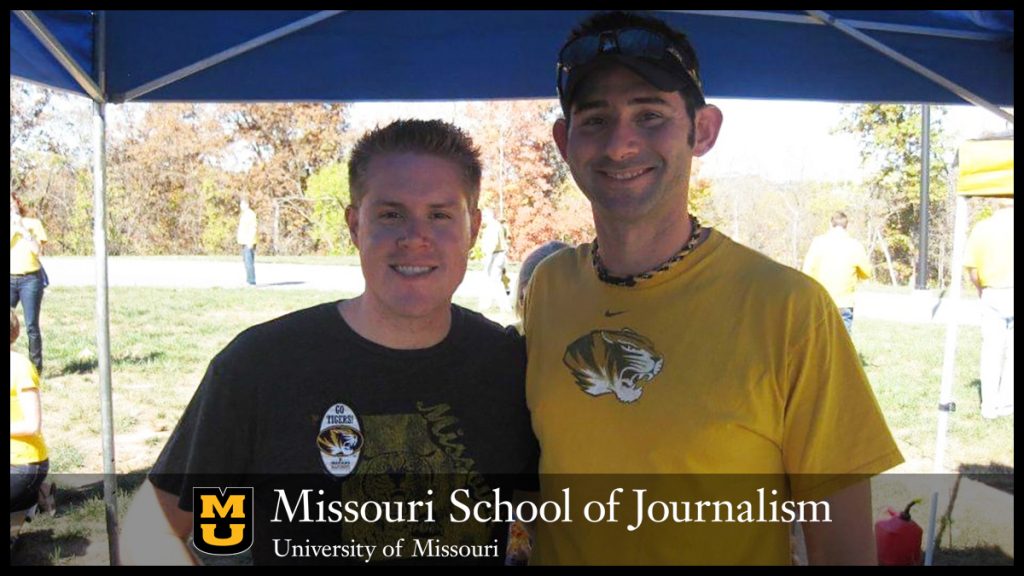 The Missouri School of Journalism prides itself on producing top journalists and strategic communicators. Graduate Josh Hayes of the class of 1999 embodied what a Mizzou Tiger is supposed to be — and more.

“Josh was a creative person,” says Dan Pierce, a close friend of Hayes and Global Communications Director at Ford Motor Company. “He didn’t see things as they were, but more so how they should be.” Pierce was a close friend of Hayes. The first time they met was through Mizzou Tour Team and as they went through school together, they became roommates and graduated with a Bachelor’s in Journalism in 1999.

After graduating, Hayes made a name for himself in the beverage industry, helping build global brands through brand planning and positioning. He eventually became a Senior Brand Manager at William Grant and Sons, a premier, family-owned distillery in Scotland which produces brands such as Glenfiddich and Hendrick’s. Even as his career grew, Hayes never forgot where he came from. Always encouraging his friends and family, Hayes would often write letters congratulating peers on their accomplishments and would never forget a birthday or anniversary. Hayes devoted his time to helping others feel good about themselves and doing the best work possible.

He never let obstacles get in the way of his dreams and went the extra mile for those he cared about. Hayes sadly passed away in September 2020, but his memory lives on in the form of a scholarship for incoming students. This scholarship will help aspiring journalists remove an obstacle to their dreams.

When they first met, Pierce never imagined that they would be so close. “He was a Southern Baptist, I’m a northern Jew. He liked music and choir, I liked sports and history.” Even though they were polar opposites, Hayes became an important part of Pierce’s life.

“My favorite memory of Josh actually came after college. In 2014, Josh was living in New York City. My wife, then girlfriend, and I were both in NYC for the New York Auto Show. Since we had met in New York, I decided I was going to propose to her there. I didn’t really have a plan as to what I was going to do … Event planning was something Josh excelled at and loved doing. He worked with me to find a perfect spot in Central Park to propose — Bow Bridge. The day of the proposal, he got us a special bottle of champagne and even made sure I had flowers to give to her.”

After Hayes’ death, Pierce knew he needed to do something to honor Hayes. When thinking about Hayes, one of the first things that came to mind was his passion for journalism and for other people. Hayes was an inspiration to everyone he met, and with that thought in mind he knew what he had to do. Pierce went to the Mizzou Alumni Association and began a fund to raise money for a scholarship in Hayes’ honor.

Pierce spoke of Hayes’ giving personality and commitment to journalism and encouraged people to help him fund the scholarship. “The outpouring of support for Josh’s scholarship is a testament to his talent as a marketer and his character as a classmate and colleague,” said Colin Kilpatrick, senior executive director of advancement for the Missouri School of Journalism. “The generosity of his fellow alumni and friends will help make possible a Missouri Journalism education for generations of aspiring communications professionals.”

This year, Madalyn Murry was selected as the first recipient of the scholarship. A junior in Strategic Communication, Murray is an active member of the Mizzou community, writing for Show Me Mizzou and serving as the Vice President of the Public Relations club. Madelyn not only embodies Hayes’ Tiger spirit but also his willingness to give back.

“My dream job is to work with small businesses and nonprofits,” Murray said. “Helping them improve their branding and communications so they can function better.”

“I want this scholarship to be as big as Josh’s personality,” Pierce said. “Helping people and Mizzou are two things Josh would be doing today, so it’s the best way we can honor him.”

If you would like to donate to the Josh Hayes scholarship, visit https://mizzougivedirect.missouri.edu/fund.aspx?item_id=723.