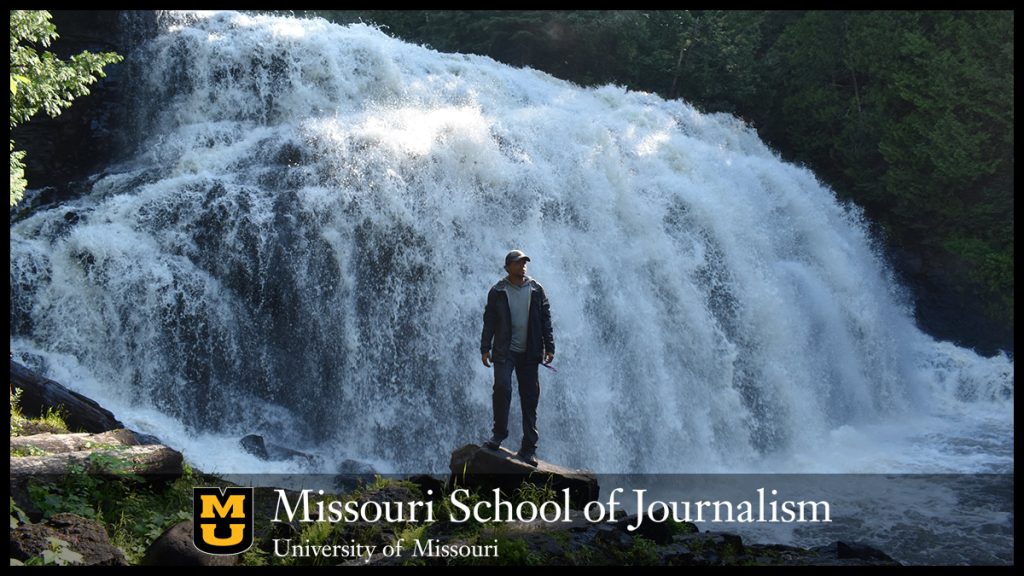 The Canadian Tundra typically isn’t a place you’ll find many tigers. However, this summer that will change when  Kieran Malloy ventures out into the wilds of Canada.

Malloy is a well-known student across the MU campus, having participated in many academic and social organizations such as MOJO Ad, Homecoming Steering Committee, Greek Life, the National Association of Black Journalists and was even honored by Mizzou’s Mortar Board in the Spring of 2021. He’s traveled across the continent, from the wilderness of Canada — traversing the unspoiled nature of Ontario and Manitoba — to the deserts of Utah. Malloy has seen a lot, and his wanderlust began in the shadow of Jesse Hall.

A native of Columbia, Missouri, Malloy has been immersed in the Mizzou community since birth. Each year, Malloy made the journey to campus to watch the homecoming parade and decorations with his mom. “The decision to stay in the black and gold was not too difficult.” said Malloy. While the choice to attend Mizzou was a simple one, Malloy didn’t know what he would study until high school.

He considered himself a proficient writer but it wasn’t until his involvement in Hickman High School’s broadcast program and the Purple and Gold News that he found his passion. “I love being able to tell people stories and get to understand and dive deeper into my community through writing and reporting,” says Malloy. “I always knew that I wanted to enact positive change on the world and journalism was the best medium to accomplish that.”

“I knew that working at MOJO Ad was going to be the pinnacle of my college experience and it became my goal for senior year.”

Like most students on campus, Malloy was required to take general education classes before entering his emphasis area within the Missouri School of Journalism. In these introductory courses, Malloy was faced with a quandary — should he go into broadcast journalism and work at KOMU or go into print journalism and work at The Missourian, writing about the stories and happenings in Columbia? Surprisingly, Malloy did neither of these. Instead, he chose the other side of the equation in the Missouri School of Journalism — Strategic Communication.

“The class that inspired me to go into strategic communication was actually MOJO Ad.” Malloy said. “I knew that working at MOJO Ad was going to be the pinnacle of my college experience and it became my goal for senior year.”

For the next three years, Malloy worked to become the ideal candidate for MOJO Ad, obtaining leadership positions in his fraternity and the National Association of Black Journalists. Outside of school, he garnered experience in both leadership and public relations. Since the summer of 2017, Malloy worked at the Camping & Education Foundation, serving as Wilderness Instructor and Expedition Guide. Leading people through the rivers of southern Canada while also being a rock-climbing instructor. “I have always had an affinity for nature, particularly the wilderness,” says Malloy. “I learned to overcome adversity and challenges and with my position I am able to pass down this appreciation for nature to future generations.”

As he continued to work with the foundation, Malloy sought more responsibility and was selected as the group’s Marketing and Communications Intern. In this position, he managed the foundation’s social media platforms, wrote long-form copy and created marketing campaigns.

When it finally became time to apply for MOJO Ad, he was confident that he’d done everything he could to succeed. After a few weeks of deliberation, Malloy was selected as the Public Relations Account Manager for the 2021-22 academic year and worked with his team to create a campaign for WarnerMedia’s “Fantastic Beasts: The Secrets of Dumbledore” in the fall, followed by a campaign for the State of the YAYA report this spring.

Malloy was integral to his team’s success, coming up with strategies as well as creative executions for the big idea. “Kieran is the definition of a team player,” says Jared Fisch, a friend and fellow MOJO Ad staffer.

“I met Kieran Malloy through MOJO Ad and the 2021 Homecoming Steering Committee,” Fisch said. “He is someone that I wish I met earlier during my time here at Mizzou. His work ethic often extends beyond the responsibility of his role … and he is always willing to lend a helping hand, no matter the circumstance.”

As Malloy’s time at Mizzou comes to an end, there are two things he would like students to remember. To always have empathy and to strive to be the best version of yourself. Malloy will continue to embody these traits he honed during his time at Mizzou as he spends the summer taking canoe trips and traveling to the polar bear capital of the world, Churchill, Manitoba.