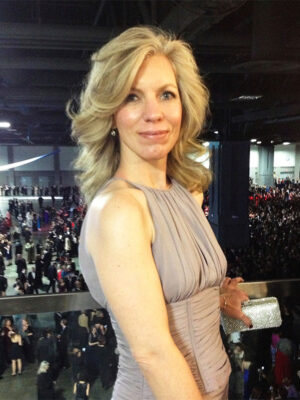 Lisa Griffin, MA ’02, always has had an inquisitive mind. When her mother would read her a bedtime story, Griffin would stop her every few seconds to ask an in-depth question about the characters or plot, which were often so complicated that her mother couldn’t even come up with a sufficient answer. Before Griffin could read, she asked her mom to read billboards they passed on the road because she wanted to know what they said. Not surprisingly, as she got older, Griffin became a voracious reader and developed a love for English and writing.

Beyond books, Griffin had the chance to experience the world beyond her hometown of Memphis. She traveled with her physician-father when he attended medical conferences all over the United States. Out of all the cities she traveled to as a child, New York was by far her favorite.

“It opened up my mind to a whole world of different types of people and artists and things that I wanted to see and view actually later on in my life,” Griffin says. “I actually love the arts to this day because of that trip.”

Her father also helped foster her love for reading. One book in particular, “Writers’ Houses of New England,” gave her information about where many famous American writers had lived. He then took her to different writers’ homes featured in the book, which furthered her passion for literature.

As she entered her teen years, Griffin started to look for something that could quench her thirst for knowledge, and journalism seemed to be the answer. She first fell in love with the field in high school when she joined her school’s newspaper. As editor, she led the staff to win multiple awards, some of which were at the state level. Her father recognized this spark of interest in journalism and ended up taking her on a tour of the Missouri School of Journalism when she was only 15 years old.

“He took me to Mizzou because he wanted me to see the best journalism school in the world,” Griffin says.

Griffin believes that her parents’ support of her various interests growing up drove her to pursue a career path that allowed her adventurous and inquisitive spirit to shine.

Although the University of Missouri was a viable option when she started applying for schools, Griffin ended up attending Auburn University and graduated in 1994 with a dual major in English and journalism. At the time, she intended to teach the two subjects at the high school level.

After graduation, Griffin wasn’t completely certain of her path, so she decided not to pursue her master’s degree in secondary English education right away. Instead, she entered the workforce as a full-time reporter.

Starting Over at MU

Griffin’s first job outside of college was at The Rome News-Tribune in Georgia. She then enrolled subsequently in the graduate program in secondary English education at the University of Georgia in Athens. In the middle of getting her teaching degree, Griffin decided that she wanted something different. She stopped working toward her degree and got a job at The Athens Daily News while she applied to various journalism schools.

After talking to many professors at UGA and professionals in multiple fields of business and doing a considerable amount of introspection, Griffin decided that MU was the perfect option.

“I decided that I wanted to teach college-level students and/or start my own communications business,” Griffin says. “So, I went to Mizzou and did both.”

It was at the Missouri School of Journalism that she not only learned about magazine journalism, but also was able to teach as a graduate assistant for Vox Magazine. Griffin was also an editor for the IPI Report, a graduate assistant for the advanced design class, an assistant editor for Vox, and a copy editor and designer for the Columbia Missourian. In addition, she worked as a researcher for the Center for Advanced Social Research at the university and worked for the city’s paper the Columbia Daily Tribune. Although she juggled many different activities, Griffin loved her years at the School and wanted to take advantage of the top-rated journalism program in every way possible.

After graduation, Griffin had a few job options all over the United States, and she decided to take a job at U.S. News and World Report as a full-time reporter. She worked during 9/11 and remembers covering it as one of the proudest moments of her career.

“Those moments are sacred to a journalist as people trust you enough to reveal what they thought and did during the tragedy,” Griffin says. “I carry those memories with me every day.”

Griffin’s career path then took an unexpected turn. She interviewed the head of the White House Office of Faith-Based and Community Initiatives for one reporting assignment. This program would allocate more federal dollars to religious organizations that offered services for communities across the United States as long as the main objective of the organization was not religious by nature. She developed a strong working relationship with the head, and he offered her a job as his main media strategist. The opportunity came at a good time as the economy had started to decline around this time. Some newspapers and magazines were implementing a hiring freeze or closing down.

“It was prudent to move forward with my career and choose a different path at that specific time,” Griffin says.

She worked on the communications team for the grant program for approximately two years. This job opened the door to a wide array of opportunities working for the federal government in D.C. Griffin started as the communications director for a U.S. representative from Florida. She also worked during the 2012 presidential election. During campaigning, she was in charge of, as she puts it, “wrangling the media” and answering any questions the national press had on shows such as CNN, FOX and MSNBC.

“Because of the higher level that I was working at, I actually stayed at the same hotel as all of the big politicos,” Griffin says. “I would ride up the elevator one day with a renowned senator and down one day with a former New York City mayor.”

After the campaigning was over, she took the job as the communications director for a senator, for whom she was in charge of every public appearance the he made. Everywhere that the senator went, she would either have to accompany him or assign one of the people on her team to escort him. Anything that the senator did had to be run by Griffin first. It was a high-stress, high-reward kind of job, and she loved the thrill of it.

“Behind the scenes in D.C. in a senator’s office during an election is a lot of fun,” Griffin says. “I would watch three TV screens in our office at once, plus have a stack of every major daily newspaper on my desk.”

She also had the responsibility of making statements on the senator’s behalf for the press.

“It’s a great responsibility; it really is,” Griffin says. “It’s a lot of pressure but also a great honor.”

Griffin also worked in a communications capacity for several organizations, including the American Psychological Association, Client Network Services Inc., National Institutes of Health and the Office of the United States Courts.

Griffin fulfilled a professional dream when she opened Griffin Media Management, now in its 13th year, as a full-service communications business. Her company’s range of activities include pitching news stories, website consulting, promoting events and corporate communications. Griffin’s business is headquartered in Austin, Texas, but she also has an office in D.C. to capitalize on the contacts she has made there over the years.

Griffin still considers herself to be a print journalist at heart. She loves the rush of deadlines, the pursuit of accuracy and uncovering the truth in each news story. Griffin knows those skills are still valuable in her career regardless of what format her work takes.

“Use your talents the best you can and serve a purpose,” Griffin says.

California native Rachel Strohmeyer is no stranger to the Midwest. Both of her parents grew up in the St. Louis area, and Missouri has been a meeting place for family reunions, Christmas celebrations and more. What drew Strohmeyer to MU was the Missouri School of Journalism. She earned her bachelor’s degree in journalism with an emphasis in public relations and a minor in political science in December 2015. She hopes to work for a nonprofit to combine her passion for writing with her love for helping those in need.

Graduate assistant Ashley Szatala contributed to the development of this story.