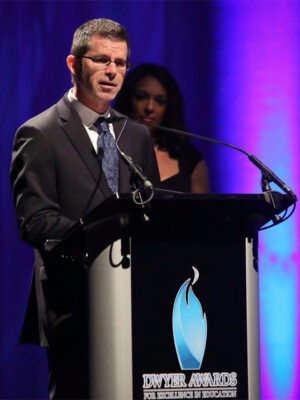 In 1981, technology failed Tim Burke. He was sitting in his yellow Chevrolet Chevette in St. Louis, furiously typing a story on a Rock Bridge High School football away game. Just as he was about to hit “send” on the story, his 1980’s Radio Shack Tandy TRS-80 computer died.

Panicking, he found a pay phone and called Mark Ulven, his sports editor at the Columbia Missourian. The paper was on deadline and they needed his story, so Ulven told Burke to start dictating the story in his head.

“When you are on deadline, you don’t mess around, you just send it in,” Burke says. “It might have been the best story I did that year.”

Meeting deadlines, by whatever means necessary, was just one of the many lessons Burke learned at the Missouri School of Journalism and in his 33-year career as a journalist. Burke has worked in all almost every facet of the industry: He’s been a reporter, editor, publisher and more, but his commitment and passion have never wavered.

Burke currently works as publisher of The Palm Beach Post and the Palm Beach Daily News. He still considers Missouri his second home.

Keeping up with his favorite hometown Los Angeles teams, the Dodgers and Lakers, is what got Burke interested in journalism as a child.

When he was growing up, Burke formed a habit of reading the Los Angeles Times everyday. He was a young kid who loved sports, and reading the newspaper was how he found out what was happening in the sports world. Since age eight, Burke knew he wanted to work for a newspaper when he grew up.

“I thought, wow, what a great possibility,” Burke says. “I loved to read and write and consume anything sports-related, and I thought sports journalism would be the perfect combination of the two.”

After Burke graduated from De La Salle High School in California, he took his uncle’s advice to attend the University of Missouri’s well-known journalism school. He applied, was accepted and hopped on a plane to Missouri.

When Burke was a junior, he took the news reporting class, where he was a reporter for the Missourian. He worked on the sports beat and covered everything from MU track to Rock Bridge High School’s sports teams.

Just a few weeks into reporting at the Missourian, Burke’s sports editor sent him to cover the NCAA convention in St. Louis. It was a wonderful break away from the routine of another Columbia sporting event. This time, though, Burke wasn’t just covering the play-by-play of a football game. He got a real sense of the industry behind sports as he covered university presidents and athletic directors discussing eligibility and conference rules.

“I remember thinking ‘Can I do this?’ but I did it,” Burke says. “It was so rewarding to stray from just covering sports; it felt like real news to me. I realized I could cover games and can also cover the news part of journalism.”

Having the opportunity to cover sports in every facet, from game coverage to industry coverage, was rewarding for Burke.

“One great thing about the Missourian is it’s the real deal,” Burke says. “You’re not on training wheels, you’re on the bike. And if you fall, you have to get back up because you have a deadline, and there is a paper coming out in the morning.”

“One great thing about the Missourian is it’s the real deal,” Burke says. “You’re not on training wheels, you’re on the bike. And if you fall, you have to get back up because you have a deadline, and there is a paper coming out in the morning.”

Professors and students close to Burke were aware of his passion for sports journalism, especially since he had a habit of always reading the sports section first in a newspaper.

Missouri School of Journalism professor Brian Brooks, whom Burke looked to for guidance, gave him a valuable piece of advice.

“Brian advised me to never tie myself down and to keep my eyes open to other possibilities outside of sports,” Burke says.

After graduation, Burke kept his focus on sports, serving as a reporter and later manager of the sports section for the Springfield News-Leader in Missouri. But Burke’s time in Springfield was more than just a first job. He met his wife, Karen, when she was a student at Drury University.

During Burke’s time covering sports in Springfield, he built a relationship with Payne Stewart, who was just starting out as a professional golfer in his hometown. In 10 years, Payne would become a world-renowned professional golfer.

Burke’s dream at that time was to one day run a sports department of a major metropolitan newspaper. Three years after his start at the News-Leader, he took a copy editing job with the Dallas-Times Herald. Burke also added the titles of sports copyeditor, copy chief and assistant sports editor to his resume.

But Burke was constantly looking forward. Miami, in his mind, was where top editors trained and worked. After three years at the Dallas Times Herald, a copy editor position opened up at the Miami Herald in 1988. Burke jumped at this opportunity.

Burke now found himself part of an award-winning section that covered professional teams like the Miami Dolphins, Miami Heat, Florida Marlins and the Florida Panthers. The Herald also covered University of Miami, University of Florida and Florida State.

In Miami, Burke learned the most about getting things right and being held accountable. The high expectations taught him to be the absolute best he could be.

“The Miami Herald was a demanding place to work because of the expected level of preciseness, but that was a good thing,” Burke says. “The sports editor at the time had a very gifted eye about what needed to be done to improve the story. I was surrounded by great people to work with, and many I still keep in touch with.”

Some, like Miami Herald columnist Edwin Pope, leaned on the California native when Pope was covering the World Series in San Francisco in 1989. An earthquake had just shaken the city, and Pope called Burke to share his anxiety. Burke told Pope not to worry about it, that it probably was just a little tremor and that they happen all of the time. He calmed Pope down, momentarily, and they hung up.

The next minute, Burke looked up at the television and saw on the news that the quake had been much more than a slight tremor: the Oakland Bay Bridge had collapsed. Burke chalks that up to a lesson in knowing all the facts first.

In 1993, Burke left the Miami Herald to become the sports editor at the Palm Beach Post. He arrived during a transitional time: Technology was starting to change the journalism industry.

“One of the biggest changes the Internet brought was a focus on the audience,” Burke says. “You have to dive into learning as much as you can about your audience and their habits. They are ever-changing.”

Burke kept in touch with Payne Stewart, who had moved to Florida to further his golf career. Burke attended various golf tournaments to show his support.

In 1999, the golf world was shaken when the charismatic, friendly and well  liked Stewart died in a plane crash. Burke knew that writing a personal account of who Stewart was and how the accident affected him emotionally was the right thing to do. So, for a day, he stepped away from the editor’s desk to be a reporter once again.

“From a news standpoint I needed to pull myself together and write about something that’s personal, and that’s not easy because we are trained to move ourselves from the situation and write as objectively as possible,” Burke says.

In 2000, Burke was put in charge of starting a digital portal at The Palm Beach Post: he launched PalmBeachPost.com, and helped launch PBgametime.com, FloridaHome.PalmBeachPost.com and PBPulse.com, for high school sports, real estate, and entertainment respectively.

In his 20 years at The Palm Beach Post, Burke has worked as a sports editor, assistant managing editor for sports, deputy managing editor, vice president of digital media and editor.

“My passion for what a newspaper stands for and what its mission is has never been greater,” Burke says. “It’s extremely important to remember what we are here for. We are so passionate about our role in the community as a watchdog, to be on the lookout on government waste and corruption. That inspires me more today than ever.”

“I have been so fortunate to work with incredibly talented colleagues here, and for an amazing company like Cox,” Burke says.

Though Burke left the world of sports journalism 10 years ago, he is proud of the sports legacy that he and others have built, one focused on enterprise and investigative reporting. During his leadership as sports editor, The Palm Beach Post’s sports section received five consecutive “Triple Crown” awards, given for best daily, Sunday, and special sections.

More than 15 of Burke’s former sports journalists are blossoming at places like ESPN, Sports Illustrated, The New York Times, The Washington Post and USA Today.

Burke considers Missouri his second home. In 2013, Burke and Randy Picht, executive director of Reynolds Journalism Institute, established a partnership between RJI and The Post to conduct a case study on the publication’s website.

“We made changes and improvements to our site based on their recommendations,” Burke says.

In his time at The Post, Burke helmed the first innovations in digital journalism, but he says that he feels that the biggest changes in the industry are yet to come. He will continue to oversee those advancements as publisher of The Palm Beach Post.

“My passion for what a newspaper stands for and what its mission is has never been greater,” Burke says. “It’s extremely important to remember what we are here for. We are so passionate about our role in the community as a watchdog, to be on the lookout on government waste and corruption. That inspires me more today than ever.”

Amy Zuroweste is a Troy, Missouri, native studying science and agricultural journalism at the University of Missouri. She grew up on a family farm consisting of wheat, corn, soybeans and a small cattle operation. Zuroweste has interned with the College of Agriculture, Food and Natural Resources Communications in Columbia, MorganMyers strategic communication agency in Waukesha, Wisconsin, and WATT Global Media in Rockford, Illinois. She is a member of Kappa Delta sorority and was a member of the 2014 Homecoming Steering Committee. Zuroweste plans to pursue a career in public relations after graduating in May 2015.