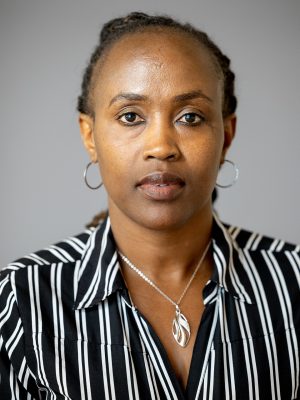 Teresia as popularly known as Terry, is an accredited journalist with the Media Council of Kenya (MCK) and has over 10 years of experience in broadcast media, specific, radio. She worked as a dedicated reporter, deputy News Editor before becoming an Editor for Eastern Broadcasting Corporation (Mbaitu Fm). She has also worked for Capital group (Capital Fm) as a correspondent for Lower Eastern province, Kenya.

Besides that, Teresia worked as a media consultant with several organizations where she trained journalists on election preparedness and coverage. Some of the organizations she provided consultancy work to include; Office of the Registrar of Political Parties (ORPP), Kenya Editors Guild (KEG), Media Council of Kenya (MCK) and United Nations Development Program (UNDP).

Teresia is a fellow with Friedrich Naumann Foundation Africa (FNFreiheit Africa), an independent organization that promotes liberal policy and politics in Germany and around the world. In Africa since 1963.

She is also a member of the Public Relations Society of Kenya (PRSK), Kenya Editors Guild (KEG) and Scribes Association Group of Kenya (scribes 254).

In 2019, Teresia was rated among the top 100 journalists according to the ratings by Kenyans.co.ke.