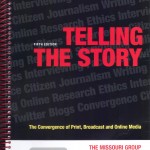 Telling the Story: The Convergence of Print, Broadcast, and Online Media, a book by The Missouri Group, reflects the changing nature of journalism both in the classroom and the professional world. The Missouri Group is comprised of four Missouri School of Journalism professors: Brian S. Brooks, George Kennedy, Daryl Moen and Don Ranly.

The professors believe that today’s journalists must have knowledge of more than one media platform. “Almost everyone who enters the workforce will be working at least two platforms, if not three. A print journalist could be on TV and a television journalist could be picking up story material for a newspaper,” said Moen.

What Telling the Story does best is teach the basic foundation of successful journalism – reporting and writing. Good journalists must be accurate and good writers. A list of the 20 most common writing errors journalists make along with guidelines for correcting and avoiding them are included. Updated practical examples that will prepare students to excel in the professional world also are provided.

Telling the Story discusses the emergence of integrated newsrooms and anticipates the future of converging media. Throughout the book students learn how to simultaneously prepare stories for multiple forms of media and effectively use the Internet. Telling the Story features more coverage of online journalism and public relations as a result of the trends.

Brooks, Kennedy, Moen and Ranly are all members of the School’s Editorial Department. In addition to teaching responsibilities for the School’s professional newsrooms, they serve as frequent seminar leaders and consultants to industry.