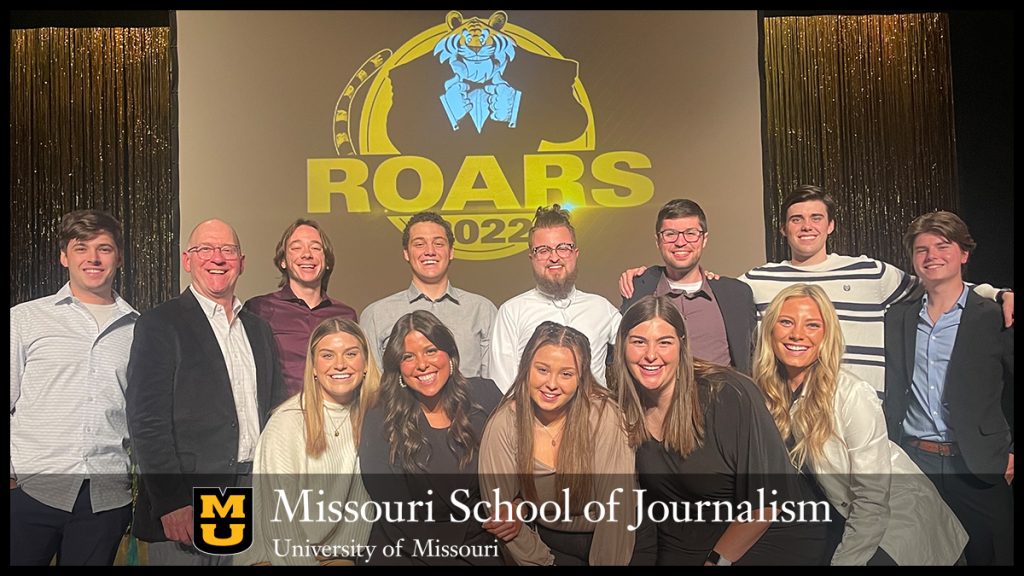 After two years of just seeing people in boxes on a screen, the annual ROARS award show was back in person this year, orchestrated by the students of the J4214 Integrated Sports Production Class. This awards show — described as “part ESPYs, part Oscars, all Mizzou” — is dedicated to the players, coaches, and influential people of the Mizzou athletic department.

ROARS was founded in 2008 and created to celebrate the academic, leadership, service and athletic achievements of those representing the University of Missouri athletic department. It is typically held in the spring and consists of a “gold carpet” entrance, dinner and pre-show social hour, nomination recognition and award winners. Athletes from all sports come dressed ‘to the nines’ to celebrate the success of their respective seasons.

Due to COVID-19, ROARS Awards had been held virtually for the past two years. This April was the first time it returned to an in-person venue and the journalism and strategic communication students in the Integrated Sports Production class had little to no reference of what to expect in terms of preparation, creative outlets and production. Students worked in close quarters with Assistant Director of Athletics and Student-Athlete Development, Adam Kiel, who guided them through this unprecedented process.

“Overall, it was a great event and it was fun to have everyone back in person,” said Kiel. “Working with the sports journalism class is always a pleasure and most of our compliments we received were about how amazing the graphics and videos were during the event. It was definitely one of the highlights of the event.”

Students were divided up into four groups — social media, promotional video, graphics and highlight reel — to complete various tasks leading up to the event. Students spent class periods twice a week creating content and pushing it out on The ROARS’ social media platforms to engage relative athletes and Mizzou organizations.

“ROARS was totally out of my comfort zone and unlike anything I had ever done before,” said senior Sophie Zell. “I was challenged to create, develop and plan in a new way. I felt incredibly supported by my class and my people at Mizzou athletics. The many months of planning paid off after the event went smoothly.”

“In having the opportunity to work on ROARS this semester with my fellow classmates, I was allowed to experience working for a real client and engaging a targeted audience,” said junior Elle Wilkinson. “I was chosen to work with the social media team and we were able to highlight a variety of athletes and coaches on our account. Being given the opportunity to work on this event as a student, along with the skill sets I have developed, is something that I can’t wait to use in the future.”

Many of the students in the class are seniors seeking professional careers after graduation. The hands-on work on the ROARS event provided students tangible experience to use in the real world.

“I loved working with the ROARS social media team because it was not only fun, but it was a great opportunity for building portfolio work that then helped me to land a post-graduation opportunity,” senior Christion Rice.

As for live event coverage, students put on “gold carpet” interviews and produced a short recap video that was posted directly after the awards ended. Additionally, they were responsible for the organization of all the award announcements and photography at the event.

“ROARS was totally out of my comfort zone and unlike anything I had ever done before,” said senior Sophie Zell. “I was challenged to create, develop and plan in a new way. I felt incredibly supported by my class and my people at Mizzou athletics. The many months of planning paid off after the event went smoothly.”

The ROARS Awards is a tradition that the Mizzou athletic department, athletes and those in the Integrated Sports Production class plan to keep afloat for many years to come.

“The Integrated Sports Production class produced all of the content and social media for the ROARS awards and provided live event coverage,” said Silvey. “The collaboration between the students in the course and the Mizzou Athletics team created a great hands-on, real-world learning experience for the students and a memorable event for the student athletes who were recognized. These students set a high bar for future collaborations and we look forward to more opportunities to integrate Mizzou students with live sports environments.”