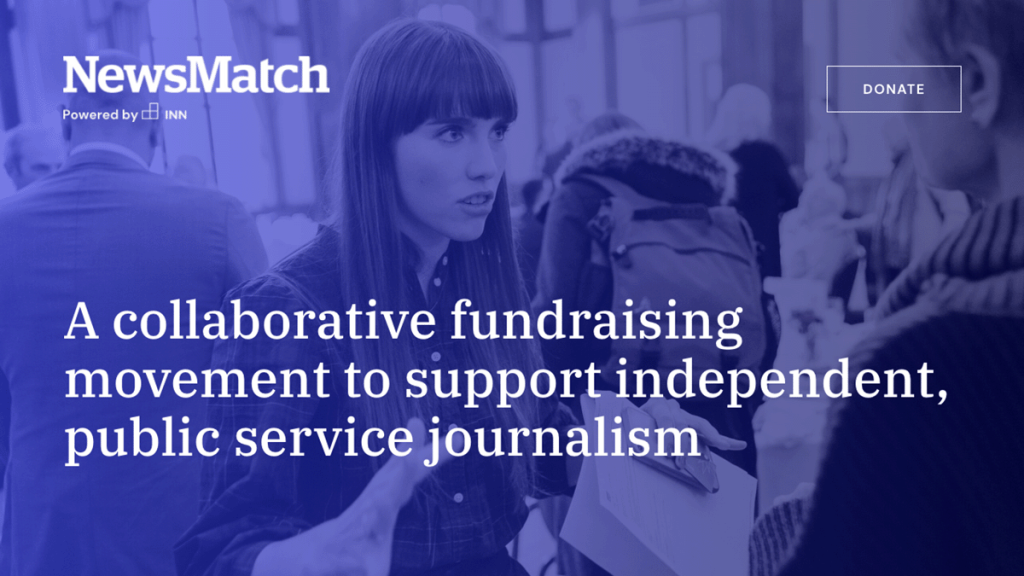 COLUMBIA, Mo. (Nov. 21, 2022) — The Columbia Missourian, a digital-first community newspaper based at the Missouri School of Journalism, has partnered with NewsMatch through the Institute for Nonprofit News (INN) to raise funds supporting the Missourian’s independent, public-service journalism.

NewsMatch is a collaborative fundraising campaign that benefits nonprofit newsrooms in the INN Network, driving donations to — and awareness of — these newsrooms while offering matching gifts and milestone rewards. Through the campaign, the Missourian has already raised more than $7,100 in individual donations since Nov. 1, a total that jumps to more than $13,000 when factoring in a $5,000 match from the Missourian Publishing Association Board and a $1,000 bonus from NewsMatch.

“The Missourian is a vital part of the School of Journalism’s commitment to community news that has a positive impact on mid-Missourians, and it’s clear that people are recognizing the value of that commitment,” said David Kurpius, dean of the School. “NewsMatch will help us amplify that support from our community so that we can continue to serve the public at an even higher level.”

Elizabeth Conner Stephens, executive editor of the Missourian, said it didn’t take long to recognize that the community was more than up to the task.

“We crossed $5,000 in three days,” Stephens said. “It was impressive to see the support that comes out when you ask for it, and we’re excited to see what else we can raise through the end of the year.”

“The Missourian is a vital part of the School of Journalism’s commitment to community news that has a positive impact on mid-Missourians, and it’s clear that people are recognizing the value of that commitment. NewsMatch will help us amplify that support from our community so that we can continue to serve the public at an even higher level.”

NewsMatch encourages its partner newsrooms to seek out matching donations in their local communities — the $1,000 bonus came as a reward for landing the matching contribution from the Missourian board. Another $1,000 bonus awaits the newspaper at its next milestone of 100 donors.

The publishing association board, led by CBS News Chief Washington Correspondent Major Garrett as president, quickly agreed to the $5,000 match. The idea had enthusiastic support from Mark Russell, BJ ’84, an MPA board member and executive editor of the Commercial Appeal in Memphis, Tennessee.

“The Missouri School of Journalism is a special place, and I trace much of my early success in the business to the foundational lessons I learned there from professors, teaching pros and other students,” Russell said. “As a board member, this NewsMatch program is another way for me to give back to the school that has poured so much into me.”

Stephens said the funds raised will have direct positive impacts on the Missourian’s journalism. Funds could potentially go toward increased budgets for travel, Freedom of Information Act requests and premium versions of services and tools the newspaper uses to present news and graphics to its audience.

The initial success of the partnership has also served as a powerful reminder of the Missourian’s importance to the local community and the School’s expansive network of alumni — Stephens said she has been floored not only by the donations themselves, but by the feedback she has heard from community members.

“The response we’ve received has helped us realize how much the Missourian has an impact on alums and readers,” she said. “They see when we have a need and are happy to step in and donate because they know the value of what we’re doing with local journalism and training our students.”

To learn more about how you can support the School of Journalism’s community newspaper as part of the NewsMatch campaign, click here.