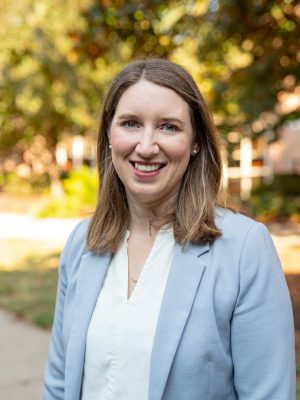 Elizabeth Stephens is the executive editor of the Columbia Missourian, the School’s community newspaper, and the Missouri Community Newspaper Management Chair. She is also an associate professor on the Journalism Professions faculty.

Stephens completed her bachelor’s degree from the Missouri School of Journalism in 2005 and her master’s degree in 2014.

Previously, Stephens served as digital director for the Missourian and KOMU-TV 8, the School’s NBC affiliate station. In the role of digital director, Stephens oversaw fulfillment of both platforms’ websites, as well as KOMU’s many apps (news, weather and OTT), and social media output for both platforms. She worked with both newsroom’s editors, faculty and students to ensure both consistently execute digital best practices.

Stephens first returned to the journalism school in August 2011 as a Knight fellow at the Missourian and served in that role for two years. Stephens joined the Missourian and School’s faculty full time in 2015. In her role as a Missourian news editor, she led a redesign of the Missourian website and managed the print design desk. She was named director of community outreach in May 2018 and digital director in August 2020. She took on the role executive editor in January 2021.

Previously, she worked as an assistant editor at SNL Financial in Charlottesville, Va., and as copy desk chief at the Columbus Ledger-Enquirer in Columbus, Ga.