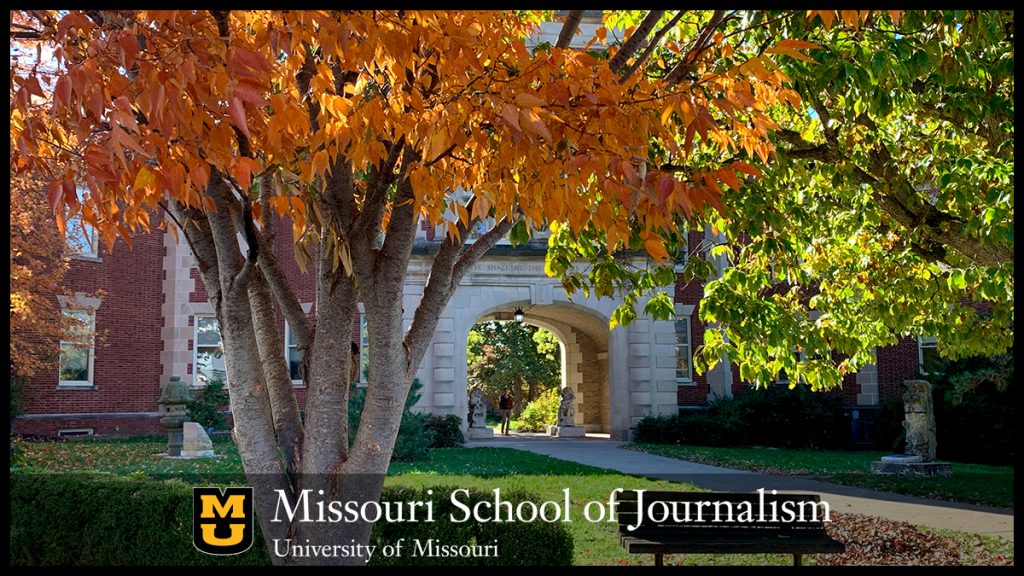 With the year coming to a close, the School of Journalism reflects on the year’s highlights

As 2021 winds down, the Missouri School of Journalism is looking back on the year’s successes. From hands-on learning experiences for students to significant research from faculty — and awards for both — the year has been one to remember.

“This year saw our school embracing the Missouri Method in every aspect of our operations, from education to research to serving the community with our professional media outlets,” said Dean David Kurpius. “Our students and faculty are on the ground engaging with the community through their work, and their success speaks for itself.”

The One Newsroom in Lee Hills Hall opened this fall, allowing for a new level of collaboration between the School’s professional print, digital, TV and radio newsrooms. Not only does the space create opportunities for students to cross-train between mediums — preparing them for the increasingly multimedia-driven newsrooms they will be entering after earning their degrees — but it also gives each newsroom increased access to resources and talent they can use to tell the stories valued by the people in the communities they serve.

With the help of a $1.4 million grant from the Walton Family Foundation, the School established the Mississippi River Basin Ag & Water Desk, led by environmental journalist Tegan Wendland as editorial director.

And in October, the School honored four industry veterans with the Missouri Honor Medal for distinguished service to journalism. The honorees each presented masterclasses in which they spoke about their experiences and offered advice to students.

The School’s world-class faculty and students continued to perform impactful research, and with the arrival of Zach Massey, Susan Renoe and Kathleen Rose this year, the capacity for research that improves science communication — an ever-more-important field, and one that meshes well with the mission of the brand new Roy Blunt NextGen Precision Health building on Mizzou’s campus — has grown. This trio is already engaged in important research, and they join a talented roster of faculty who are exploring ways to increase science literacy and help scientists explain their research to the public using journalism and strategic communication.

Monique Luisi, for example, studied social media chatter to identify trends in the perception of HPV vaccine safety, work that could help inform how this vaccine and others — such as the COVID-19 vaccines — should be communicated to the public. In another project, Jon Stemmle, Amy Simons, and Jim Flink led workshops to help communities across several countries in Africa learn to avoid misinformation and communicate clearly on the topic of pesticides. Shelly Rodgers, who became the Maxine Wilson Gregory Chair in Journalism Research earlier this year, worked with Jamie Flink to lay the groundwork for this project with a preliminary study.

The list goes on, but science communication is only one piece of the work being done at the School of Journalism. Yong Volz, recently honored with a Faculty Award from the Mizzou Alumni Association and the Ann K. Covington award, received a grant from the American Journalism Historians Association to document the history and impact of Asian American journalists. Damon Kiesow and Shuhua Zhou, in work funded by the Reynolds Journalism Institute, studied how design and content choices can influence how well news readers understand and retain digital news. Margaret Duffy’s research offered insight into the workplace values of millennials, and Ryan Thomas studied the impact of COVID-19 on community newspapers.

And when it came to undergraduate research, students continued to excel, helping performing research as diverse as analyzing the contents of internet comment sections and tracking trends in media law across the U.S. and the world. The State of the Yaya report, an annual look at the 18 to 24-year-old demographic from students at the School’s MOJO Ad agency, provided a valuable window into how young adults have responded to the pandemic.

The School saw big developments at its professional media outlets and marketing agencies as well. KOMU-TV’s Jeimmie Nevalga became the first woman to be named news director at the station before being honored with the Maxine Christopher Shutz Award and Lecutre for Distinguished Teaching; Pete Bland was named sports editor at the Columbia Missourian; and just this week, the School announced that Elizabeth Conner Stephens will be the newest executive editor at the Missourian while also holding the Missouri Community Newspaper Management Chair. Additionally, MOJO ad students designed a campaign for the Missouri Department of Conservation to encourage Missourians to reconnect with nature.

In addition to Rodgers’ and Stephens’ promotions to chaired positions, Ron Stodghill was named the Meredith Chair in Service Journalism.

In the documentary journalism program, students worked on Murray Center filmmaker-in-chief Robert Greene’s new film, “Procession,” as production and camera assistants, and also helped create a film about AIDS activist Pedro Zamora that premiered in October at Atlanta’s Out on Film Festival. Still others showcased their films at the annual Stronger Than Fiction Film Festival.

At the Association for Education in Journalism and Mass Communication (AEJMC) conference in August, representatives of the School won several top awards:

“I’m so proud of our School for continuing to command a presence on the national stage with talent and hard work,” Kurpius said. “As happy as I am with this year’s successes, I can’t wait to see what the next year has in store, and I couldn’t ask for a better community of scholars to join me on that journey.”

This was only a brief list of the accomplishments of the School’s faculty and staff this year. To stay up to date and learn about what is happening world’s oldest and finest school of journalism in real time, follow the School on Twitter, Facebook, and Instagram.