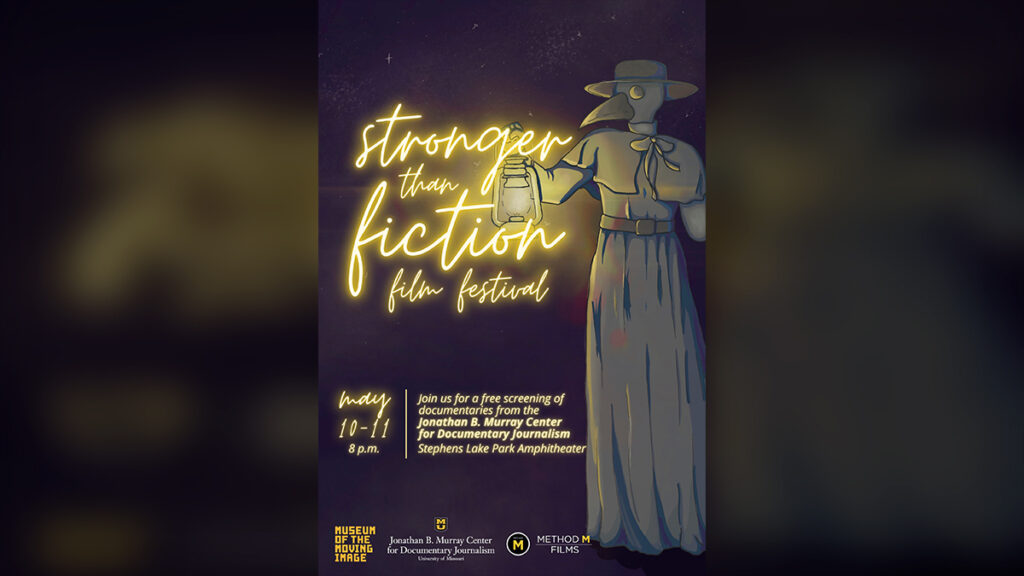 The films are the culmination of two years of work.

Columbia, Mo. (May 3, 2021) — After a virtual-only outing last year, the Missouri School of Journalism’s Jonathan B. Murray Center for Documentary Journalism’s fifth annual Stronger Than Fiction Film Festival is back for 2021 in both in-person and virtual forms.

The in-person movie screenings will be shown at Stephens Lake Park amphitheater in Columbia, Missouri. The outdoor screenings will stretch over two nights, taking place on Monday, May 10 and Tuesday, May 11, starting at 8 p.m. each evening. Admission each night is free. Guests are encouraged to bring a chair or blanket to sit on in the socially-distanced spaces around the amphitheater.

“We’re excited to be able to show the films in person again this year, albeit with COVID-19 safety in mind,” said to Stacey Woelfel, professor and director of the Murray Center. “Our students had to work smarter throughout the pandemic to get these films done. The work speaks for itself in how they were able to adapt and persevere.“

There will be two blocks of films each night, with a Q&A with filmmakers after each block (a schedule and the synopses of the films are below). On Tuesday night, the Murray Center will present awards to the filmmakers from the festival’s independent jury after the final block of films.

In addition to the in-person screenings the films will be available for streaming from May 10 through May 16 at https://www.methodmfilms.com/stf2021

The films are the culmination of two years of work. The students’ developed their ideas for these films during their time at Mizzou. The ideas were then approved by an outside panel of documentary professionals during the Spring 2020 semester. From the pitch to production, these 20 students put everything into their work and these films are the fruits of that labor.

“I’m so proud of our filmmakers this year, who persevered in unprecedented times to make their films,” said Robert Greene, associate professor and filmmaker-in-chief at the Murray Center. “This year’s batch is a mix of personal tales, adventurous formal risks and observational journalism that represents all that documentary can be.”