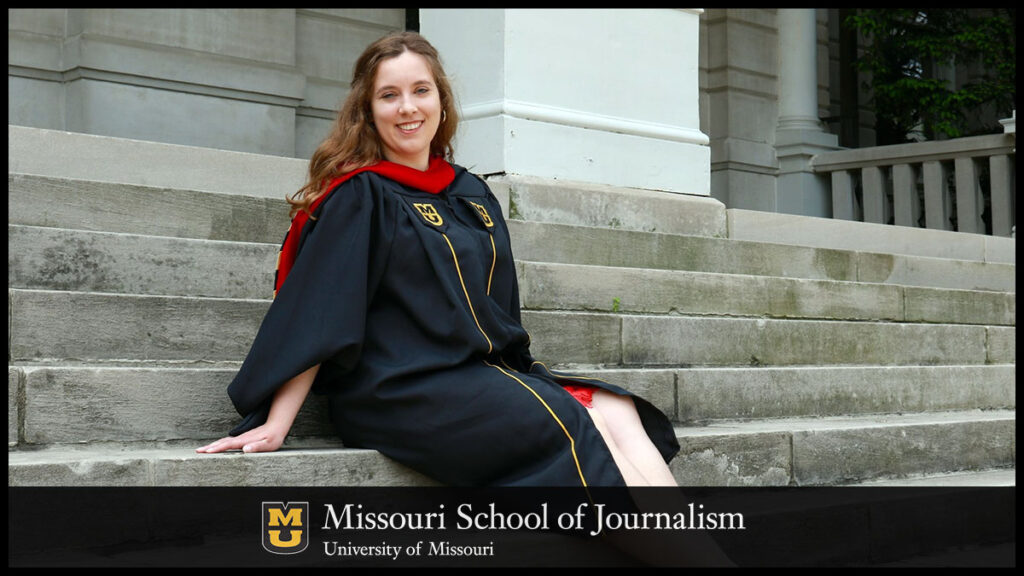 Sabatke pushes through challenges created by COVID-19, grief from the death of faculty mentor

Columbia, Mo. (Aug. 18, 2020) — The documentary “Thoughts and Prayers,” produced by Missouri School of Journalism graduate Sarah Sabatke, BJ ’18, MA ’20, received a semi-finalist recognition in the 47th annual Student Academy Awards. Unfortunately, the film is not advancing to the finals.

The 92 films chosen as semi-finalists of the international student film competition came from a pool of 1,468 movies.

“Thoughts and Prayers” recognizes the 20th anniversary of the Columbine (Colorado) High School shooting in April 1999. The film “explores how people remember the day of the shooting and how they navigated media coverage of the event, from both sides of the camera. Set against the lead-up to the event’s 20th anniversary, the film follows journalists and survivors as they reflect on the past two decades and strive to spread a message of hope. Intimate access allows viewers into the lives of individuals impacted by the tragedy as they deal with the new wave of media attention brought to town by the anniversary,” according to the film synopsis.

Sabatke produced the film as a student studying at the School’s Jonathan B. Murray Center for Documentary Journalism program, which provides hands-on training and access to the latest camera and editing equipment, and independent documentary production opportunities in places like New York and California.

Her inspiration to create “Thoughts and Prayers” came from having grown up as part of “Generation Columbine,” which means she doesn’t know a world without school shootings. She said as she watched the news about the Las Vegas shooting at the Route 91 Harvest Music Festival in October 2017, she noticed how people responded to the shooting with “thoughts and prayers.” However, even when it seems the country cares about the tragic events, they continue to happen and people go back to their normal lives, she noted.

“I was both frustrated at the inaction and terrified,” she said. This prompted her to focus her graduate school research on mass shootings. Realizing that the Columbine shooting anniversary was approaching inspired her to talk to journalists who covered the tragedy for her film, she said.

She wanted to learn about the Columbine tragedy from those who experienced it and encourage viewers to think about shootings differently. She hopes those who have become desensitized to tragedies will ask questions such as “Why do these mass shootings continue to occur and what are we doing as a country and as individuals to change the status quo?”

The film allowed community members to share their experiences, talk about their loved ones and grieve. Sabatke also wanted the film to convey that journalists are not robots and that they can suffer significantly from reporting on these events.

She began developing the film concept in the fall of 2017, brainstorming ideas with her convergence professors, Mark Hinojosa and Judd Slivka. She began reaching out to subjects in 2018 and began filming in February 2019. She traveled to Denver every three weeks during spring 2019 to shoot. She then began editing the film from May 2019 to April 2020.

The production process was riddled with challenges, said Sabatke. Aside from the expectation of managing logistics and filming and then traveling by herself, the final leg of production proved the most difficult, she said. In February 2020, Hinojosa, her professor, mentor and friend, passed away. He had also been one of her producers on the film, and a member of her graduate thesis committee.

“The editing process was even more challenging, knowing that Mark would never be able to watch the final film,” she said.

Then COVID-19 hit and the world shut down in March 2020. She said it became challenging to motivate herself to work on the film with no more school activities to mark the time, while in total isolation from others.

The production process for “Thoughts and Prayers” took a mental and emotional toll. While working on the film, she was also working on a thesis about the 2018 shooting at Stoneman Douglas High School in Parkland, Florida.

“The research process for both was intense,” she said. “There are a lot of materials available online, and at times it was difficult to avoid those most graphic in nature. I took several long breaks to recharge and distance myself a bit from the subject. Reporting on a subject involving trauma can be incredibly challenging and self-awareness became crucial in managing any negative consequences.”

Sabatke said she’s thankful for the undergraduate and graduate education she received from the School, which provided a strong foundation for her journalism career and producing this film.

“The technical skills that I learned throughout the program gave me confidence to enter any situation feeling prepared,” she said. “The theoretical knowledge of documentary film that I learned through the Murray Center was very helpful in learning about the film industry as a whole and in learning how to shape a storyline in different ways. The combination of technical and theoretical skills that I learned through the J-School gave me the confidence to pitch such a big project, as well as the ability to execute it to the high standards that the convergence program had always held me to as an undergraduate.”

Faculty, classmates and staff at the RJI Futures Lab served as constant sources of support and were willing to brainstorm ideas, she said.

Producing the film helped her learn and hone skills including editing, filming with different cameras, organizing logistics of shoots and conducting interviews. These will be useful to her new job as an audiovisual production specialist at Defense Information Systems Agency under the U.S. Department of Defense. She will work with the production of multimedia materials for the agency.

“I think Sarah’s film stands out to juries and programmers because of the care she took to be in the right place at the right time,” said Professor Stacey Woelfel, director of the Jonathan B. Murray Center for Documentary Journalism. “She planned carefully in the weeks and months leading up to the Columbine anniversary, lining up everything and everyone she needed to execute the film perfectly.”

“I was impressed with how Sarah conveyed a very strong sense of place in the film,” added Assistant Professor Brett Johnson, who worked with Sabatke on her graduate thesis and served as someone with whom Sabatke could talk to about various aspects of the film like ethics and to debrief from different parts of the process. “She uses many more landscape and wide-angle “setting” shots in her film than in typical documentaries and some of these shots linger for several seconds longer than typical setting shots. This shows how important place is to the people involved, be it the school, the city, the community, the geography. Sarah turns the setting of the story into a character of the story. That, among other attributes, makes her film stand out and makes it deserving of the accolades it has received.”