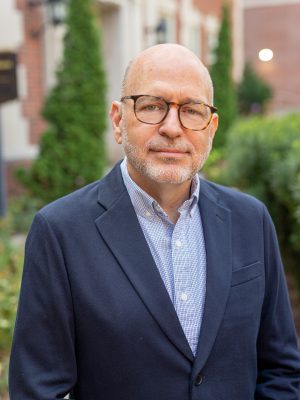 STACEY WOELFEL is a professor at the Missouri School of Journalism and the director of the Jonathan B. Murray Center for Documentary Journalism. The center uses the Missouri Method hands-on approach to teach students to artfully tell true stories in the documentary fashion. Previously, Woelfel spent 24 years as the news director for KOMU-TV, the University of Missouri-owned NBC affiliate for central Missouri. The commercial station serves as the teaching laboratory for the Missouri School of Journalism. Students at KOMU-TV are the reporters, producers, writers, photographers, and editors of six daily newscasts that go head to head with competing newscasts in the market.

Woelfel is also the director of aerial journalism at the Donald W. Reynolds Journalism Institute. In this role, he oversees the institute’s seven-drone fleet, teaches a drone-flying class and works with interested Missouri journalism students who want to get their FAA licenses to become drone pilots. He also writes about drone issues for RJI’s website, as well as other industry news sites and advocates for journalists’ use of drones on the state and national levels. In 2013, Woelfel was an RJI fellow, where he explored how newscasts can take advantage of second-screen viewing.

Woelfel is the past national chairman of the Radio Television Digital News Association (RTDNA), past national president of the Carole Kneeland Project for Responsible Journalism, past president of the board of governors of the Mid-America chapter of the National Academy of Television Arts and Sciences and currently serves as vice president of the board for the Kansas City Film Festival. He has received the University of Missouri’s highest teaching honor, the William T. Kemper Fellowship for Teaching Excellence, as well as the Mizzou Alumni Association’s Faculty-Alumni Award.

Woelfel is a winner of the Payne Award for Ethics in Journalism, multiple Emmy and Edward R. Murrow awards, along with numerous regional and local honors. He has been inducted into the Silver Circle of the National Academy of Television Arts and Sciences. He is a frequent instructor in free media practices for journalists worldwide. Woelfel has authored the book Suspicious Signs and penned a chapter in Silenced: International Journalists Expose Media Censorship. He holds a doctorate in political science.

He received a Bachelor of Journalism degree in broadcast journalism from the Missouri School of Journalism in 1981, as well as receiving master’s and doctorate degrees in political science from Mizzou. Before returning to the University of Missouri in 1986, he worked as a photographer and assignment editor at WESH-TV, the NBC-affiliate station in Orlando, Florida.

Woelfel enjoys traveling with his wife, Rebecca. The couple has two adult children who are both pursuing careers in the movie and television business in Los Angeles.