Columbia, Mo. (Feb. 9, 2004) — KOMU, an NBC-affiliate, is the only commercial television station in the United States that uses its newsroom as a working lab for students. The station’s news department is operated by the Missouri School of Journalism. 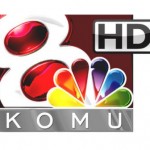 KOMU became the first television station to broadcast a signal in mid-Missouri on Dec. 21, 1953. The station offered programming from all four networks available at the time: NBC, CBS, ABC and the Dumont Network. The first news team consisted of Phil Berk, anchor and news director, Dale Spencer, weathercaster, and Jean Madden, sportscaster. The newscast was titled “The News Camera.”

From the very beginning, KOMU focused on education, with programming including “The Missouri Forum,” hosted by Dr. Edward C. Lambert, vice president for television for the University, and later by Rod Gelatt, long-time news anchor and faculty supervisor of KOMU News. The station also focused its early programming on women, starting with “Ladies Fair,” then “Of Interest to Women.” Children watched “Captain Bob” and his cartoons.

In the late 1960s, the dynamics of the station changed as journalism students were allowed more involvement in the day-to-day operations of the television station.

“Missouri is consistently ranked number one in the world for broadcast journalism education,” said Dean Mills, the School’s dean. “The reason is twofold. We have the best faculty, and we have the best facilities, thanks to KOMU.”

Today students typically work one 10-hour shift per week, but many have class assignments that cause them to be in the newsroom more frequently. During any regular semester, the station hosts about 125 J-School students, coming and going on different days. In addition to the four full-time faculty members working under the supervision of Faculty News Director Stacey Woelfel, the principal anchors serve as adjunct faculty, teaching both in the newsroom and formally in the classroom. KOMU airs a typical schedule of newscasts for a network affiliate: 6 a.m., 5 p.m., 6 p.m. and 10 p.m. Monday through Friday, plus evening newscasts on weekends.

“Our broadcast students are baptized in the fire of real-time television news experience. They learn by reporting and producing news, under the pressures of real deadlines, real sources, real audiences,” Mills said.

Since its pioneering days, KOMU has set the industry standard in mid-Missouri. Its many “firsts” include:

“I am so proud and appreciative of this station’s history,” Marty Siddall, the station’s general manager, said. “As we look forward we can promise the same high commitment to provide our viewers with the very best in news, information and entertainment programming as well as a deep commitment to serving mid-Missouri through public service.”