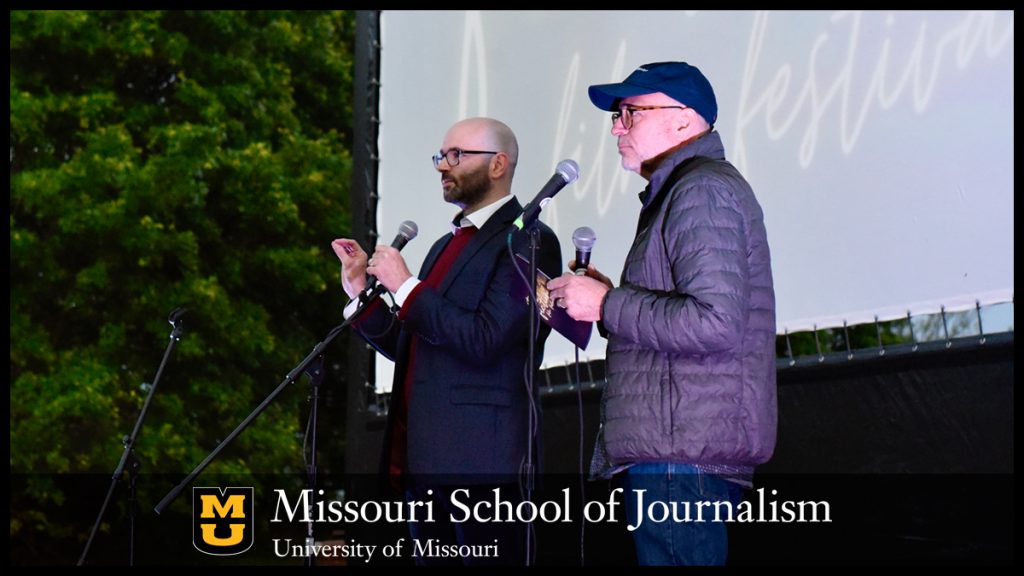 Robert Greene, left, filmmaker-in-chief at the Jonathan B. Murray Center for Documentary Journalism,
and Stacey Woelfel, director of the Murray Center.

Columbia, Mo. (Sept. 15, 2022) — The Missouri School of Journalism’s Jonathan B. Murray Center for Documentary Journalism has been named one of the best film schools in the nation by Moviemaker Magazine for the second year in a row. It’s an honor that befits the program’s rising prominence in documentary film schools, but it also highlights the unique footing and subversive success of a documentary journalism program positioned not within a traditional film school, but within a school of journalism.

The Murray Center’s launch in 2014 was hardly the first example of the School of Journalism taking a groundbreaking approach to a journalism curriculum. The School’s strategic communication program provides on-the-job education through ad campaigns and other opportunities for professional clients that are rarely offered at journalism schools, and the founding of the School itself in 1908 represented a revolutionary approach of training future journalists through practical, hands-on experience in professional newsrooms.

But the Murray Center has managed to stand out amidst this culture of innovation, in no small part because of the works its students produce. Just as students in the School’s professional newsrooms and ad agencies produce work products as part of their education, documentary students create projects ranging from short films to feature-length documentaries.

It’s not unusual for students’ films to play in festivals around the country and the world, and some, like “Keep the Cameras Rolling: the Pedro Zamora Way,” have gone on to extensive success on the festival circuit.

The success has been gratifying for Stacey Woelfel, director and professor emeritus, who said the quality of students’ work has validated the program’s unorthodox approach of having both graduate and undergraduate students make their own documentaries.

“The feedback I got from the educational community early on was, ‘We don’t think you can have undergraduates make documentaries and have them be any good,’” Woelfel said. “Well, of course we can; it’s the same model we use for all our journalism students who do work for television, print, and other media. It’s worked well.”

That model — the School’s Missouri Method of learning by doing — also influenced the program’s leadership structure. The Murray Center’s Filmmaker-in-chief, Associate Professor Robert Greene, is an active and successful documentarian who can offer students rare insights into the industry by discussing the logistics of details like distributions deals as they happen. Recently, students also worked as production and camera assistants on his latest feature film, “Procession,” which made the 2021 Oscar shortlist in the documentary category.

“I don’t see my duties at the Murray Center as being separate from my filmmaking duties,” Greene said. “I’m never really thinking, ‘okay, now I have to turn something off and turn this back on.’ I bring it all into the classroom; wherever I am in the process, it becomes part of what we’re discussing.”

The center’s two-year program in documentary theory, development and production offers a wide range of flexibility for students, who can make films about virtually anything through a documentary lens.

“We’re not producing only artistic documentaries or character portraitures or journalistic films,” Greene said. “We’re doing all of that. I’m trying to get our students to think about who they are as people, as artists, and then go do something with that inspiration they find through the program.”

Accordingly, alums go on to a variety of careers in film, television and journalism; it’s that flexibility that drew Marian Bouchot, BJ ’21, to the program.

“I knew I had a passion for storytelling, and I wanted to figure out where I kind of fit into that,” said Bouchot, who now works as an anchor and reporter for ABC-affiliate KESQ-TV in Palm Springs, California. “I didn’t feel like all the film schools in L.A. were a good fit, but I thought journalism might be a little too formal for me, so I thought, ‘What’s a happy medium?’ And that’s when I found the Murray Center.”

Though Bouchot now works in the TV news industry, the foundation in storytelling and documentary techniques she developed at the Murray Center has proven essential for her journalistic work.

“So often in broadcast, it’s easy to end up making the story about yourself or insert yourself in the story when it isn’t necessary. “I really think working in documentaries helped me learn when to leave myself out of the story and let the scene and characters breathe. When I’m behind the camera doing a day-turn for the evening news, I put the character front and center and let them tell the story, because they are the story.”

Bouchot’s philosophy bears a striking resemblance to that of Jonathan Murray, a School of Journalism alum who funded the creation of the center with a $6.7 million gift in 2014. Murray is considered an originator of today’s reality television genre, which is defined by its method of putting real-life people and situations front and center for unscripted stories; his production company, Bunim-Murray, created MTV’s “The Real World” in 1992 and has continued to make a splash in the industry through work on shows like “Project Runway” and “Keeping up with the Kardashians.”

For Murray, who said he was drawn to reality television’s potential for longer-form stories after beginning his career in the news industry, the Murray Center represented an opportunity to give students an early education in creating feature-length documentaries, helping them to develop a skill set that would be broadly applicable across the journalism and film industries.

“Documentary study is usually a part of film schools, but as far as we knew, it had never been part of a journalism school,” Murray said. “I see documentary journalism as an opportunity to really look deeply at important issues in a way that you can’t always do in a news broadcast. That’s super important to society: just as daily journalism can be a check on our democracy, documentaries can also be a check.”

The program’s curriculum also takes advantage of another singular aspect of the School of Journalism: its vast and accomplished alumni network. Throughout each semester, students are treated to presentations and Q&A’s from visiting artists, many of whom are School of Journalism alumni. Mo Scarpelli, BJ ’09, who co-directed festival favorite “Frame by Frame,” is just one former graduate (pre-dating the Murray Center) who has returned to help out with the program.

Another alum, Adam Dietrich, recently took on the role of alumni coordinator for the center, a position that will help the program continue to expand and engage with its network of alumni through visiting artists and other opportunities, including pairing each student in capstone classes with an alumni mentor.

In the eighth year since the center’s founding, changes are afoot, though the program remains true to the vision originally hatched in 2014. Woelfel partly attributes that consistency to early success in promoting the center in industry circles.

“We were wildly successful in getting the name out there,” said Woelfel, who toured the festival circuit with Greene to drum up publicity for the center and network with Greene’s extensive contacts in the industry. “But our initial plans, I think, were good enough that we have made very few changes as we’ve gone along.”

One shift, however, will come next spring, when Woelfel will step down as director (he is already enjoying semi-retirement in Palm Springs, just down the street from Bouchot). His successor will not inherit his title, but will instead be known as a supervising producer, a newly-created role that Woelfel said will create a producer-director relationship between Greene and the new hire of the sort that is ubiquitous in the film industry.

Though the imminent departure is bittersweet, it comes at a time when the program has begun to display a notable sign of maturity beyond its increasing recognition in the press and film industry. Whereas students in the center’s early days often found their way into the program by chance, having initially enrolled at the School with designs on a more traditional journalism education, students are now choosing Mizzou specifically because of the center.

“We have absolutely started to see people coming to Mizzou specifically for our program — a lot of graduate students are seeking us out, in fact,” Greene said. “We’re eight years in, and each year I see more and more of that.”

Still, Greene remains fond of the program’s persistent allure for those who, like Bouchot in her days as a student, aren’t sure where they fit into the world of journalism and storytelling.

“We get a little bit of the island of misfit toys,” he said. “We get very creative people who might not be sure if a newsroom is right for them, and they discover in us what Stacey used to call the ‘pirate radio station.’ So we have a really great combination of people who are coming for the Murray Center and those who find us in a different way. I’m proud of both paths.”

The center offers a number of opportunities for students and the wider community to participate in documentary film events. Frequent collaborations with Ragtag Cinema, Columbia’s local independent movie theater, often involve screenings of important documentary works accompanied by live Q&A’s with the directors. One upcoming series will screen works by eminent documentarian Frederick Wiseman before culminating in a public masterclass from Wiseman himself.

Learn more about the center and upcoming events here.