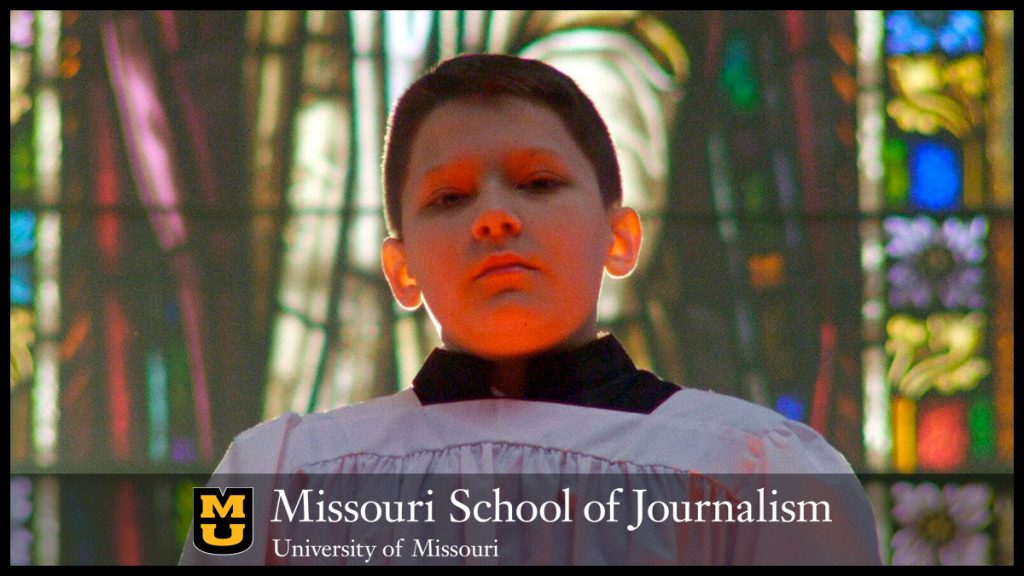 A scene from the documentary “Procession,” by Associate Professor Robert Greene, filmmaker-in-chief at the Jonathan B. Murray Center for Documentary Journalism

Columbia, Mo. ( Sept. 16, 2021) — Moviemaker Magazine recently named the Missouri School of Journalism’s Documentary Journalism program one of the best film schools in the country. The recognition shed light on the speed at which the program, founded in 2014, has become known for the rare opportunities it provides to undergraduate students.

“Very few undergraduate film programs in the country allow students to actually make films,” said Professor Stacey Woelfel, who is retiring this month after nearly a decade as director of the Jonathan B. Murray Center for Documentary Journalism. “We’ve proven that our students are more than up to the task.”

The hands-on approach to documentary filmmaking is consistent with the School of Journalism’s “learning by doing” style of education; just as future reporters learn their trade by producing content for one of the School’s six professional media outlets, aspiring filmmakers not only participate in shooting, editing, and producing film projects, but also create their own film as their final project. Known as the Missouri Method, this approach gave the center’s film production company its name: Method M Films.

Founded in 2014 with a $6.7 million gift from School of Journalism alumnus Jonathan Murray, the center has featured a two-pronged approach since its inception. Woelfel, who came to the center after 24 years as KOMU-TV’s news director, has handled classes focusing on the journalism-centered aspects of planning and making films, while acclaimed documentary filmmaker Robert Greene has taught students about the artistic process. Both have made successful films that included students as part of the productions.

“There is no journalism program like ours,” said Associate Professor Robert Greene, filmmaker-in-chief at the Murray Center. “Having me as an active working filmmaker makes it possible to talk to students about things that are happening in real time. You don’t get that kind of sharing of information elsewhere.”

Greene is central to the program’s method of balancing journalism education with the artistic aspects of documentary films. His new film “Procession,” which centers around six survivors of sexual abuse at the hands of Catholic priests, featured students as production and camera assistants and was recently acquired by Netflix. When the deal was announced, Greene stopped his class and explained how the deal was made, offering the students real-time information about how the film industry works.

A legacy of success

Greene’s “Procession” is only the most recent success story coming out of the Murray Center. From shorts to feature-length documentaries, the program has produced a number of award-winning films — another upcoming high-profile release is “Keep the Cameras Rolling: The Pedro Zamora Way,” which examines the continuing influence of late AIDS activist and MTV’s “The Real World” star Pedro Zamora.

Co-directed by Woelfel and Bill Horner, a teaching professor of political science in the College of Arts & Science, the documentary features interviews from the likes of President Bill Clinton and Dr. Anthony Fauci, director of the National Institute of Allergy and Infectious Diseases. Students were integral to the planning and production of the film, which premieres at Out on Film, Atlanta’s popular LGBT film festival, on Oct. 3 (read more about the film here.)

For Leo Rocha, BA ’20, a production coordinator at VICE Media who worked on “The Pedro Zamora Way” while pursuing his journalism degree, the documentary journalism program’s success lies in the diversity of experiences it provides for students.

“The first semester was all about research and figuring out who would be the best people to interview for the film,” Rocha said. “The second semester was about interviewing people and working with film equipment. The highlight for me was going to Miami to interview Pedro Zamora’s family. As a whole, it was probably my favorite experience at Mizzou.”

With Woelfel retiring as director of the Murray Center, the search is now on for a new director who will continue the program’s streak of achievements.