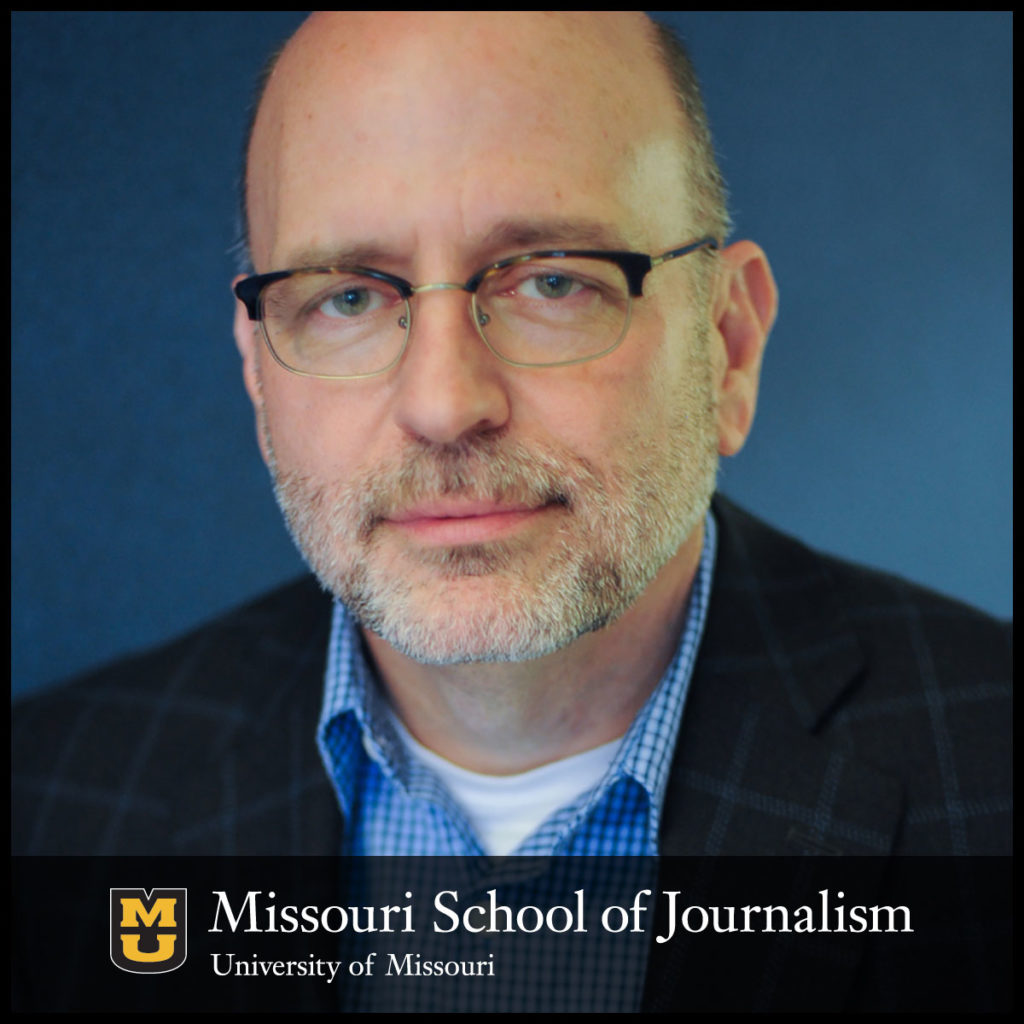 Professor Stacey Woelfel is one of five University of Missouri faculty to be awarded the 2017 William T. Kemper Fellowships for Teaching Excellence.

He Is One of 5 MU Teachers to Be Recognized

Columbia, Mo. (March 21, 2017) — University of Missouri Interim Chancellor Hank Foley and Commerce Bank Chairman and CEO Teresa Maledy today awarded one of the 2017 William T. Kemper Fellowships for Teaching Excellence to Stacey Woelfel, associate professor and director of the Jonathan B. Murray Center for Documentary Journalism at the Missouri School of Journalism.

Foley, Maledy and a group of professors, administrators and staff surprised Woelfel by honoring him with the fellowship, which includes a $10,000 check. Kemper Fellowships are awarded to five outstanding teachers at the University of Missouri each year.

This year is the 27th anniversary of the William T. Kemper Fellowships for Teaching Excellence, which were established in 1991 with a $500,000 gift. Kemper, a 1926 MU graduate, was a well-known civic leader in Kansas City until his death in 1989. His 52-year career in banking included top positions at banks in Missouri, Kansas and Oklahoma. Commerce Bank manages the trust fund.

Stacey Woelfel’s teaching philosophy revolves around providing students with individualized attention and focusing on their own specific goals. Woelfel stands out as a leader in creating a culture and learning environment that emphasizes mutual respect while helping students design their customized education plans and succeed in meeting their educational needs and goals. Woelfel says a large part of his approach is motivating each student to travel a path of self-discovery. He believes students learn best when they examine their own work for the breakthroughs that allow them to advance as journalists and filmmakers.

Woelfel began his career at MU in 1986 as an instructor at KOMU-TV. In 1990, he had been named news director of KOMU, where he served until 2014 when he was named director of the new Jonathan B. Murray Center for Documentary Journalism.

Missouri School of Journalism Dean David Kurpius says that Woelfel is best known as an elite trainer of broadcast journalists. In his 28 years of working with students at KOMU-TV, Woelfel developed a reputation among the industry as a teacher whose students excel at the highest levels, earning multiple national Edward R. Murrow and William Randolph Hearst awards.

“His quiet style is attentive and engaging,” Kurpius said. “The best indicator of Stacey’s teaching ability is to hear from alumni who came through his classes and worked for him at KOMU. They consistently tell stories of career-changing instruction that prepared them to be leaders and innovators in the industry. In his time as the inaugural director for the Jonathan B. Murray Center for Documentary Journalism, he has recruited and nurtured strong student classes and built a culture that will be key to the success of the Center.”

Meredith Artley, BJ ’95, is a former student of Woelfel and the current editor-in-chief for CNN Digital Worldwide. She describes Woelfel as an innovative leader with journalistic vision.

“Stacey Woelfel leaves a permanent mark on the students who pass through the best journalism program in the world,” Artley said. “I have had some remarkable role models in my life. Stacey stands apart as someone who represents so much of what I and fellow students aspired to be. Smart. Experimental. Witty. He embodies the Missouri Method by being the ultimate teacher and a calm, accessible leader who knows his craft.”

In his 30 years as an instructor and faculty member at MU, Woelfel has been instrumental in developing and teaching courses in broadcast and documentary journalism for one of the top journalism schools in the world. These courses include micro-documentary photojournalism and photography, documentary business, broadcast news, advanced broadcast reporting, and convergence editing and producing.

Kellan Marvin, a current student and a member of the inaugural graduating class of the Murray Center, says Woelfel works tirelessly to create curriculum and provide students with a solid foundation that prepares them for careers in the unpredictable field of journalism.

“Stacey takes a pragmatic approach to everything: creating course content, leading discussion on films and mentoring students on any issues they may have,” Marvin said. “He is knowledgeable about every aspect of documentary filmmaking; however, despite his seemingly never-ending expertise, Stacey never intimidates students or makes them feel inadequate. He cares about each student personally and challenges them to examine perspectives other than our own.”

Woelfel has earned multiple awards and honors for his work as a teacher and journalist, including the 2007-2008 Missouri School of Journalism O.O. McIntyre Professorship Award for Teaching Excellence, the 2008 Missouri Interscholastic Press Association Knight Award, The 2006 MU Excellence in Education Award, the 1994 Edward R. Murrow Award for Small Market Excellence, and numerous regional Emmy awards.

Woelfel holds three degrees from the University of Missouri, including a bachelor’s degree in journalism, and master’s and doctoral degrees in political science.