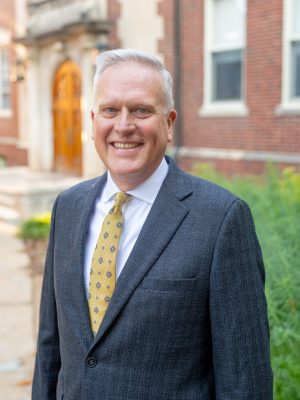 David D. Kurpius joined the Missouri School of Journalism as dean in 2015, pairing a focus on strategic innovation and growth with the School’s famed Missouri Method of hands-on learning.

Beginning in 2016, Dean Kurpius implemented an ongoing strategic planning process to engage faculty, staff, students, alumni and industry leaders and chart the next century of work for the School. This resulted in a future-focused and student-centered curriculum with increased student graduation and success rates, improved newsroom structures, more local journalism coverage, and broad growth in diversity, equity and inclusion.

This work requires resources, and Kurpius actively works to engage alumni, industry leaders and donors to move the School forward. During his time as dean, the School has raised more than $80 million to fund faculty fellowships, student scholarships, expanded local journalism, and innovative strategic communications, among other initiatives. He actively engages top leaders in the journalism and strategic communication industries to connect them with the School and solicit their input and collaboration.

These efforts also reflect the value Dean Kurpius places on impactful research. Under his leadership, the School has grown its grant expenditures, built a science communication focus, expanded its health communication research, increased collaborations across campus and partnered with MU Extension and Engagement to improve service to Missourians. He has also connected the work of scholars with the industry through the Reynolds Journalism Institute.

Since starting his career as a local television reporter, improving local journalism in service to democratic life is at the core of Kurpius’ work. His research and leadership continually emphasize this effort. Kurpius actively engages the School’s Reynolds Journalism Institute (RJI) to improve local coverage. He oversees the School’s six professional newsrooms — KOMU-TV (NBC), The Columbia Missourian newspaper, Vox Magazine, KBIA-FM (NPR), Missouri Business Alert and the Missouri News Network (statehouse bureau) — that are at the center of this effort.

Kurpius also increased the School’s impact in Missouri outside of its professional newsrooms, expanding partnerships with the Missouri Press Association and the Missouri Broadcasters Association to share statehouse coverage with more than 100 Missouri news organizations.

Kurpius earned a bachelor’s degree in telecommunications from Indiana University’s Media School and master’s and doctoral degrees in journalism and mass communication from the University of Wisconsin-Madison. He previously served as a professor and administrator at Louisiana State University for almost 20 years. His research on building newsrooms that focus on civic responsibility and diversity and inclusion appears in more than 20 peer-reviewed journals and books.