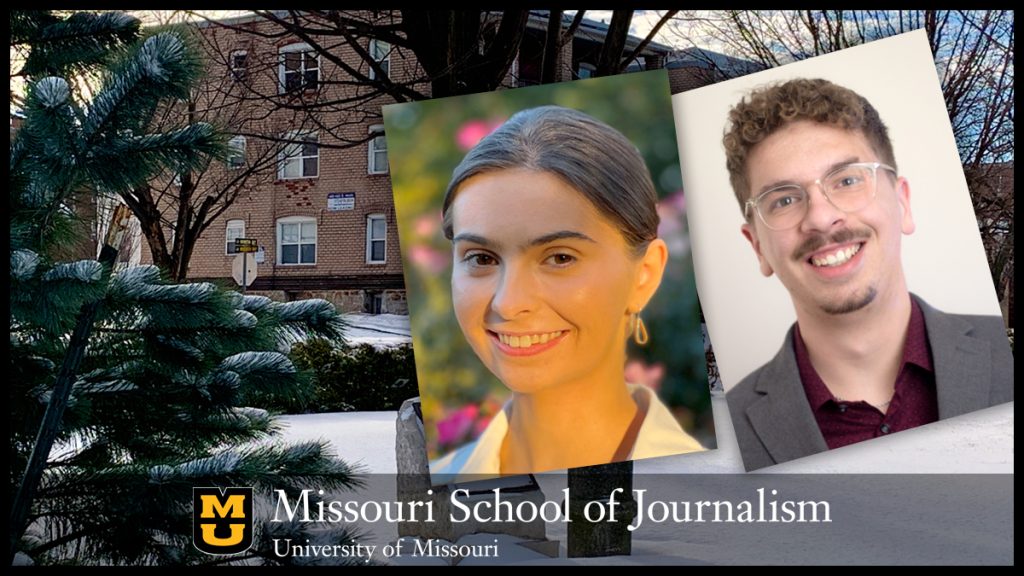 COLUMBIA, Mo. (Dec. 19, 2022) — Two Missouri School of Journalism students have finished in the top 5 in the Hearst Journalism Awards Program’s 2022-2023 Feature Writing Competition. Eli Hoff, a student in the School’s accelerated Master’s program, won the competition overall while senior Ella McCarthy won fifth place, particularly notable feats given that schools can only submit up to two students for consideration.

“I’m proud to see our students crowding the top five in the first Hearst competition of the season,” said David Kurpius, dean of the School. “These honors are a testament to the drive and passion Eli and Ella pour into their work as student journalists serving our community, and they also highlight the impact of the incredible guidance our faculty and staff provide in the One Newsroom.”

The students’ top finishes against 150 entries from 82 schools came with scholarship awards: Hoff earned $3,000 and qualified for the Hearst National Writing Championship in June 2023, and McCarthy earned $1,000. Their work has also put the School of Journalism in first place in Hearst’s ongoing Intercollegiate Writing Competition, which tallies points across five writing competitions running from now until May. The only school with two winners in the top five — or the top ten — the School of Journalism will receive grants matching the students’ awards.

Hoff won first place for “‘No other option’: Afghans put trust in strangers from Missouri before harrowing escape to safety.” Published in April on the front page of the Columbia Missourian, the School’s digital-first community newspaper, the article presents a harrowing narrative of Jefferson City local Timothy Griffin’s international efforts to help evacuate an Afghan family in the aftermath of the fall of Kabul. The family of 15 ultimately made it to safety in Canada after a grueling 68-day odyssey.

“I’m really grateful to have been the one to tell this story and grateful for the folks whose lives the story captures,” said Hoff, also a student innovation staffer at the School’s Donald W. Reynolds Journalism Institute. “They gave me so much time, detail and emotion in recounting this…It means something to them to have this story told, I think, and it was a powerful experience for me, too.”

It’s a story that, if not for a few strokes of happenstance, might never have been written. Hoff caught wind of the story in passing from a co-worker of Griffin, who wasn’t the type to publicize his own deeds. But getting Griffin to open up wasn’t the only hurdle: as a higher education reporter for the Missourian, this wasn’t necessarily Hoff’s story to tell. But Professor Mark Horvit, who worked on Hoff’s and McCarthy’s stories as an editor, gave him the go-ahead. It’s not a call Horvit regrets.

“Eli’s meticulous reporting and strong interviewing skills allowed him to write a narrative that reads like a thriller,” Horvit said. “He builds tension while making readers care deeply about the fate of the family whose journey he is chronicling.”

Much like Hoff’s story, McCarthy’s winning feature opens with an absorbing scene that transports readers to an evocative place — in this case, a path “lined with hundreds of beaten, blemished bike tires.”

“Hidden encampments create community for those without homes,” published in December of last year, explores the lives and daily realities of the people who populate Columbia’s often secluded homeless encampments.

McCarthy’s earnest approach to the material is reflected in the story, which features an uncommon level of access to the encampments and the people who live there.

“Ella’s keen eye for detail and compassion for the people she met resulted in a deep portrait of a community that is otherwise invisible to the public,” Horvit said.

For McCarthy, a Kaplan Fellow who will work at the ABC News Washington Bureau in the spring, the Hearst award represents wider recognition of a story she already considered among her most meaningful work for the Missourian.

“I’m honored to have received this award,” McCarthy said. “The story about the encampment is one of the most important pieces I have worked on in my time as a journalist. I’m incredibly thankful for all the support and guidance I’ve received from my mentors in the J-School.”

Horvit attributes at least some of Hoff’s and McCarthy’s success to their ability to track down little-known or ignored stories and convince key sources to participate. The heart of Hoff’s story hinged on an interview with members of an Afghan family that required two-way translations between Pashto and English and was made possible by connections he forged in the process of collecting interviews. McCarthy earned the trust of otherwise reclusive communities that offered her a window into little-known corners of Columbia’s homeless community.

“In both cases, Eli and Ella chose unconventional subjects and gave readers insight into stories and people they would otherwise have little chance of discovering,” Horvit said. “In both cases, the reporters found these stories themselves and brought passion to their work.”

The conclusion of the feature writing competition marks only the beginning of the William Randolph Hearst Foundation’s 63rd Journalism Awards Program. The program will feature a total of 14 competitions: two photojournalism, one audio, two television, four multimedia and five writing competitions. Last year, the School of Journalism won the Intercollegiate Broadcast Competition and around a dozen students finished in the top 20 in various Hearst competitions.