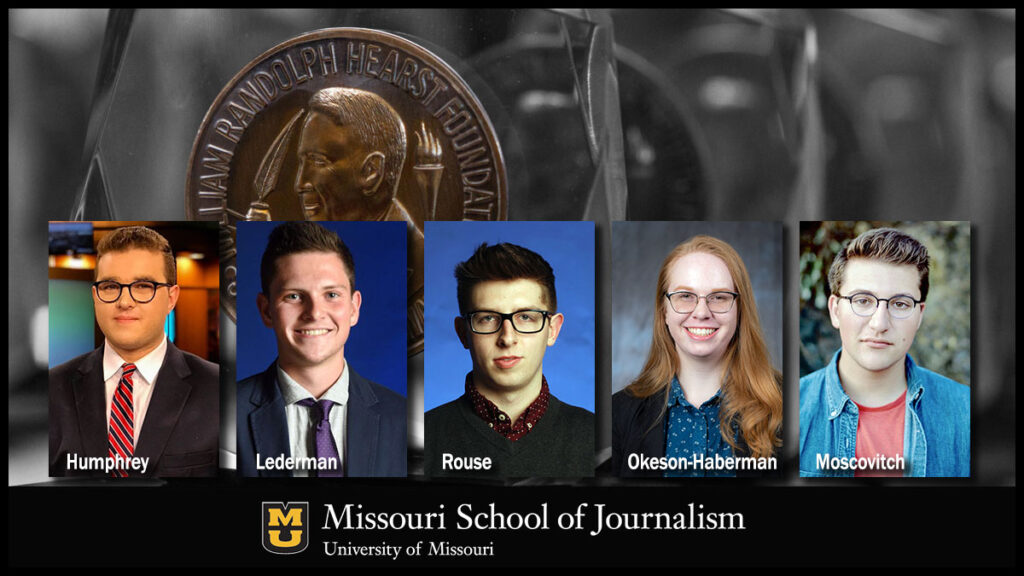 Seventeen University of Missouri students, including a project team of 14, won awards and more than $10,000 in scholarships during the 2019-2020 Hearst Journalism Awards Program, which culminated recently with the 60th annual Hearst National Championships.

Called the “Pulitzers of college journalism” – the Hearst awards consists of 14 competitions held throughout the school year.

Columbia, Mo. (July 2, 2020) — Seventeen students, including a project team of 14, won awards and scholarships during the 2019-2020 Hearst Journalism Awards Program, which culminated recently with the 60th annual Hearst National Championships. Collectively, the students won more than $10,000 in scholarships.

Missouri School of Journalism student Spencer Humphrey, a runner-up in the National Television Broadcast News Championship, was one of five finalists in the television category.

With points earned by students during this year’s program, the University of Missouri won the fifth-place trophy in the Intercollegiate Overall category.

The following students placed in the top 5 in monthly competitions:

Rouse was a semifinalist in the Photojournalism category; Humphrey in Television. Ethan Stein, who placed sixth in the Television II – News competition, also advanced to the semifinals because a competitor was ineligible due to graduating in spring 2019. Okeson-Haberman, BJ ’19, did not advance in Radio because she too was ineligible.

All of the winning stories – told from the high school gridiron to the halls of the state capitol – were based in mid-Missouri, even Moscovitch’s New York Times story on two Columbians.

“My experience working with the two roller skaters taught me that as journalists and photojournalists, we must tell stories about people, not about their adjectives and identifiers,” said Moscovitch.

According to Hearst, this year’s program received a record 1,396 entries for the 14 competitions.