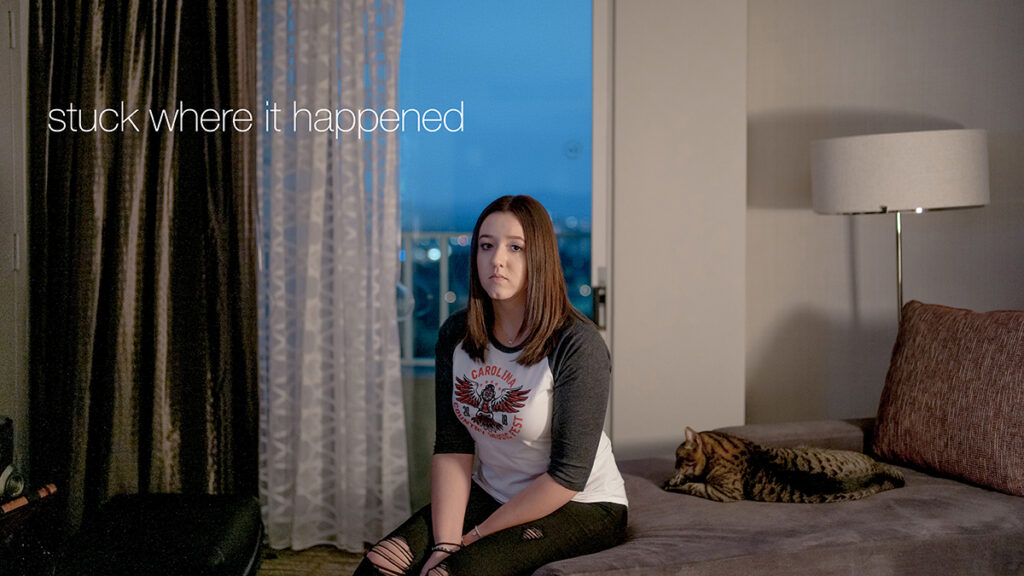 Moscovitch and Rouse’s entries were among 90 entries submitted by students at 51 schools.

The piece tells the story of Lara Edwards, who finds herself struggling with PTSD again after leaving her college studies early to go back to her hometown after COVID-19 struck. The PTSD originally developed after Edwards experienced a traumatic experience in her hometown. A few years earlier, she had been in a bar in her hometown when someone opened gunfire in the bar. She began struggling again with the PTSD because of being back in her hometown, being isolated and seeing the news of COVID-19. Moscovitch had previously photographed Edwards, who was also one of his high school classmates, for a project The New York Times was doing on the shooting’s survivors and he said he wanted to continue to tell her story.

“Jacob has become talented at creating portraits that interpret the mood and feeling emanating from the person with whom he’s connecting,” said Kratzer, who is also an associate professor. “This is a skill he’s been working on for several years. Jacob reads the individual then — through light and lensing — creates the metaphor of the mood. He spends time interviewing people, getting quotes, and synthesizing this into a vision.  He’s developing his method to explore the nuances of emotions. In this portrait series, he’s working with interpreting the stages of recovering from a traumatic event, meeting the people in their space and visually translating depression, anxiety, and melancholy.”

Moscovitch began working on the story for his Video Documentary class when he returned home from studying abroad in Denmark at the Danish School of Media as part of the University of Missouri Journalism Abroad exchange program.

The multimedia package features a video and written story. Moscovitch, who is studying photojournalism, says his studies aren’t directly linked to documentary journalism, so he was thankful for the opportunity to “expand my comfort zone and work within a new medium.”

According to Sticker, who is also an independent visual storyteller, Moscovitch’s story shows the depth and time that was put into it.

“I think it is an important story about the effects of COVID, especially at that time in the spring last year, where most people were focused on the virus itself,” said Sticker. “To be able to unfold the deeper effects of COVID on his character’s trauma, created a linkage that I think just in the last months, we are seeing in the broader discussion about it – the effects on mental health. It also combined problems like mass shootings with COVID, isolation, trauma, in a simple yet beautiful way, what I think is the strength of most good stories. Lastly, I think he managed to also create a visually strong story, what is even stronger, when you think that he did not know, if you could even enter her house for instance, had very limited time and had to work with a lot of workarounds to build the story. So at the end, I think it is a combination of all those aspects that made the story award-winning.”

Moscovitch said he was also thankful for the journalism classes he took with professors David Rees, Jackie Bell and Brian Kratzer prior to completing this project, which helped prepare him for some of the technical and storytelling aspects of this project.

The Hearst Journalism Awards Program is conducted under the auspices of accredited schools of the Association of Schools of Journalism and Mass Communication and fully funded and administered by the William Randolph Hearst Foundation. Often called the “Pulitzers of college journalism” – the awards program consists of 14 competitions held throughout the school year: five writing, two photojournalism, one radio, two television and four multimedia. The program awards up to $500,000 in scholarships and grants annually.