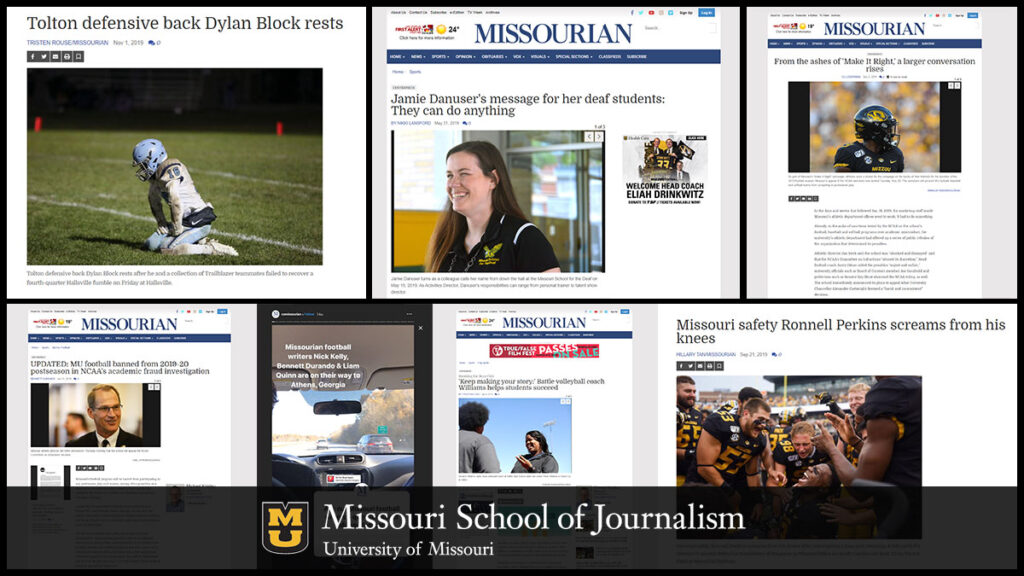 Professional sports editors and journalists from across the nation selected the winners during four days of judging in St. Petersburg, Fla. The national contest recognizes excellence in professional sports writing.

Journalism students were named winners in nine of the 11 writing/photo/video categories in which they were entered. The top five in each writing category will be announced at a later date.

“Our students won these awards in competition with professional sports journalists already working in the real world,” said Michael Knisley, assistant professor and sports editor for the Missourian. “The recognition for their work is a testament to the value of the Missouri Method and to the commitment of these full-time students. Among the many things that impress me about the content they generated in winning at APSE is the wide range of storytelling forms they employed to engage their audiences and the judges —  from longform narratives all the way to an Instagram story, a mini-doc, Q&As, compelling photography and everything in between.”

Among the student winners was a nod to a group of women journalists who generated the ‘Breaking the Boys Club’ 10-part series, which placed in the Projects category.

According to Knisley, the series, which put a long-overdue spotlight on (as Christina Long wrote) “the stories of women and girls in Columbia who are leaders and difference-makers in their sports,” was solely Christina’s brainchild.

“Not only did she (Christina) come to me with the idea, she suggested that the project be reported, written, photographed, graphic-ized, video-ed and everything else-ed entirely by the women in the Missourian newsroom,” said Knisley. “In addition to dreaming it up and doing some of the reporting and writing herself, she also managed the project. She recruited women journalists from across the newsroom (beyond the sports department), all of whom enthusiastically offered their help. Over a period of several months, the individual parts of the project dominated the Missourian’s engagement metrics. The series did wonders to advance the role not only of the community’s sportswomen but also of women as sports journalists at the Columbia Missourian.”

Student winners for the 2019 APSE awards are as follows:

The Columbia Missourian is a digital-first community newsroom that covers news and sports. The paper is supervised by professional editors and staffed by Missouri School of Journalism students who do the reporting, copy editing, design, photography and multimedia. This hands-on teaching of learning-by-doing is called “The Missouri Method.” The published work is optimized for social media, mobile and web, with the print editions delivered five-days-a-week. The publication was founded in 1908 as a community newspaper.