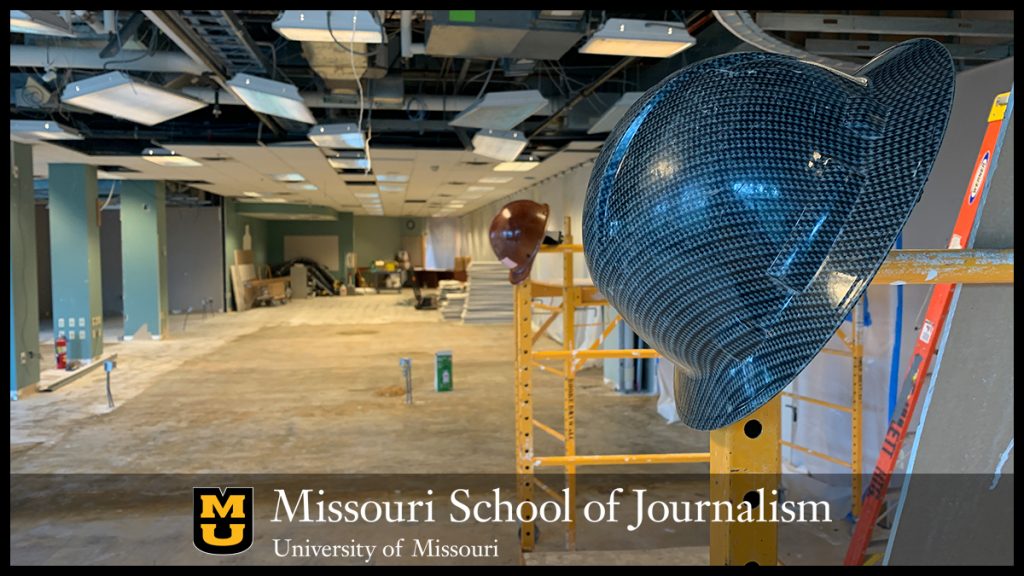 The second floor of Lee Hills Hall underwent demolition and renovation during the summer of 2021 in order to accommodate the School’s new shared newsroom concept. | Photo: Nate Brown

Columbia, Mo. (Oct. 19, 2021) —The journalism landscape has changed dramatically in the last two decades, with everything from online news, social media, and the rise of “fake news” contributing to tidal shifts in the industry. At the Missouri School of Journalism, innovators are looking for ways to get ahead of the curve, to lead the way as the industry and society as a whole continue to evolve.

To that end, the School is pioneering a new approach to the concept of a newsroom, one in which elements of a tv station, a newspaper, a magazine, a radio station, and a digital news outlet are combined in a single space. The goal is to encourage various news media to share resources, collaborate on stories, and help students to develop a broad range of skills while serving the community with engaging journalism.

“Journalism is about covering stories that change lives and spark public discourse,” said David Kurpius, dean of the School of Journalism. “By bringing our professional media outlets together in one newsroom, we are not only training resourceful, multi-talented journalists, but we are strengthening an already powerful network of news services to cover our communities. Whether it’s investigative journalism, breaking news coverage, or other stories that impact our audience, tearing down the walls that separate our newsrooms means every reporter at each of our outlets has the largest possible arsenal of tools at their disposal.”

This “one newsroom” is centered in Lee Hills Hall, home to the Columbia Missourian since 1995. Formerly filled with offices and workspaces, the walls have come down — literally and figuratively — on the third floor to clear a space for open communication between the Missourian, KOMU-TV, KBIA-FM, Missouri Business Alert, and Vox Magazine. Though the shift is still in its early stages, it’s already generating excitement among the leaders of the respective outlets, who are meeting daily to discuss stories, coordinate coverage, and identify opportunities to work together.

“The newsroom is becoming a laboratory where students have remarkable opportunities to experiment and cross-train in different types of reporting,” said Professor Mark Horvit, interim Executive Editor of the Columbia Missourian. “They are learning that if you’re working on one kind of story, there are benefits to collaborating with people who are telling the story in a different way or using different tools, because there are bound to be angles you didn’t think of and assets you didn’t know you had.”

Preparing the next workforce

The changes in Lee Hills Hall come on the heels of an ongoing curriculum overhaul in the School that, despite continuing to allow students to choose an “emphasis area” in a particular journalistic discipline, prioritizes training students to develop all-around experience.

As skills that were once heavily specialized — such as creating social media content and shooting videos — become more integral to a variety of jobs in journalism and strategic communications, the idea of specializing solely in one type of journalism is no longer the preferred approach. The space in Lee Hills Hall is intended to resemble the organizations of the future, where blended, multimedia newsrooms could be the rule rather than the exception.

“We want to serve as a model for the industry going forward, which not only means we are breaking down the walls that have traditionally separated newsrooms, but we are training the future leaders who will fill those new spaces,” Kurpius said. “Media outlets are increasingly looking at ways to make the most of their resources across all their different products, so graduates who know how to work in a fully collaborative, multi-faceted newsroom and can perform in a variety of roles will be in high demand.”

The focus on accessibility of resources extends to more than recording equipment and the other traditional tools of the trade; KOMU-TV has now placed a car closer to students on campus for those who don’t have access to a vehicle, allowing them to more easily reach news assignments.

Associate Professor Jeimmie Nevalga, KOMU-TV’s News Director, was once involved in a forerunner of the one newsroom concept in Chicago, where she worked as a senior producer at CLTV and WGN-TV. The stations were then-owned by Tribune Media, which also owned the Chicago Tribune.

“We didn’t share a newsroom, but we did share stories, and it was considered one media organization,” Nevalga said. “Having seen where the industry is headed, I recognize that media outlets want people who know how to produce content for different platforms. A journalist today might be working for several different platforms at the same time, and there will probably be a platform in a few years that we haven’t thought of yet. The one newsroom is a great way to prepare students for that environment, and it’s an opportunity they won’t find anywhere else.”

While KOMU-TV will be keeping its broadcast building south of Columbia, reporters will be able to produce content from Lee Hills Hall. Similarly, KBIA-FM will use three professional audio booths to record stories, which can then be sent at the push of a button to the studio in McReynolds Hall for broadcast, according to Mike Dunn, the radio station’s general manager. Dunn, too, emphasized the opportunities for cross-training that the space provides.

“With our presence in Lee Hills Hall, it’s a breeze for a student to write a story for print, then walk right over to a whisper room to record a story for radio,” Dunn said. “Having that kind of multimedia experience makes our students more marketable, and it allows every outlet to capture more stories than they might otherwise.”

The School’s experts agree that even as curriculum changes and the one newsroom help students become proficient in more than one type of journalism, there is no reason for anyone to stop dreaming of becoming a superstar sports commentator or a New York Times columnist.

“A lot of students who want to become sports reporters want to be the next Stephen A. Smith,” said Professor Mike Jenner, a teaching editor at the Columbia Missourian and the Houston Harte Chair in Journalism. “What they sometimes forget is that Smith started as a newspaper reporter long before he arrived at ESPN. We want our students to achieve their goals, and to do that, we need to help them build the broad foundation of skills that will make those goals possible.”

Many of the jobs students are aspiring to today might look very different a decade from now, Jenner added, making it all the more important for students to acquire the experiences and knowledge they will need in an evolving job market.

“The way people get their news is changing,” Kurpius said. “We don’t want to simply respond to those changes after the fact. In getting out ahead of them, we are creating thought leaders who will change the game and redefine how great journalism is made.”