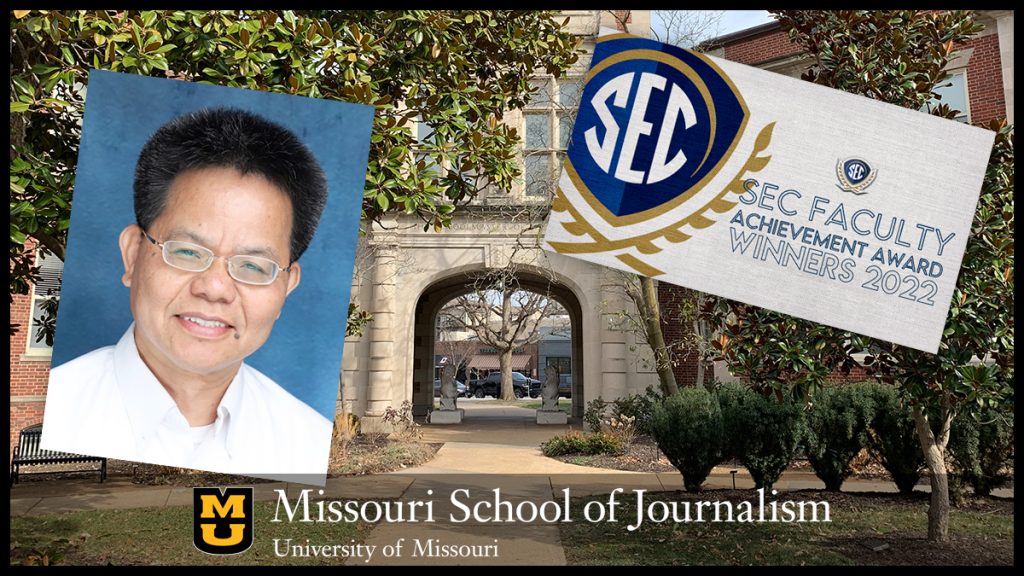 The Southeastern Conference announced today that Shuhua Zhou, the University of Missouri Leonard H. Goldenson Endowed Chair in Radio and Television, is the winner of the SEC’s 2022 Faculty Achievement Award.

This recognition is given to one professor every year from each university within the SEC. Of the 14 recipients, one is awarded the SEC Professor of the Year Award, which will be announced later this month.

“Shuhua is an outstanding professor,” said Journalism Dean David Kurpius. “He works closely with those in industry and academe to address the interdisciplinary transformations and advancements taking place in broadcast today. His abundant scholarship work, industry experience and global perspective make him an outstanding choice for this honor.”

Zhou earned his doctorate from the School of Journalism at Indiana University. After 19 years at the University of Alabama, where he served as professor of journalism and creative media, telecommunication and film, and associate dean for graduate studies, Zhou came to Missouri as an endowed chair at MU.

Zhou says his success as a teacher goes far beyond just his knowledge and experience.

“Teaching is not about just one set of skills,” Zhou said. “It takes a loving and caring person to be good at it. I think the most successful way to teach is not to impart knowledge, but to lead students to a land of curiosity. When people are motivated to learn, they learn a lot more and much better.”

After almost 23 years of being a professor, Zhou says that he’s humbled by the recognition from the SEC.

“This may be a cliché to say, but I am incredibly humbled and honored to be named the winner of this award,” Zhou said. “You know, Chinese people regard great scholars to be those who have research that could stack ‘as tall as the person.’ I can store all of mine in a jump drive. So, I’ve still got a lot of work to do.”

Zhou’s past work and publications have not gone unrecognized among his peers at MU, the United States and the world. His research studying how people learn from television news, focusing on the basic processes of news cognition, has been published in premiere communication journals.

“Dr. Zhou has demonstrated incredible creativity and diligence through his research and his time in the classroom,” Ramchand said. “His work in mass communications and the psychology behind communications has provided a significant service to communicators all over the world.”

“What I love most is meeting incredible students and working with intelligent people,” Zhou said. “A lot of people think of teaching as empowering people, but it’s also empowering myself as well. Knowledge always needs to be refreshed. One of the biggest benefits of being a professor is being with my students. Often, they have some of the newest and brightest ideas. Being a professor makes me learn and pushes me to be the best version of myself.”

SEC Faculty Achievement Award winners each receive a $5,000 honorarium. Zhou is the 10th faculty award winner announced this year. Once every winner is announced, the SEC will reveal the winner of their SEC Professor of the Year Award.

More about the prestigious award can be found here.