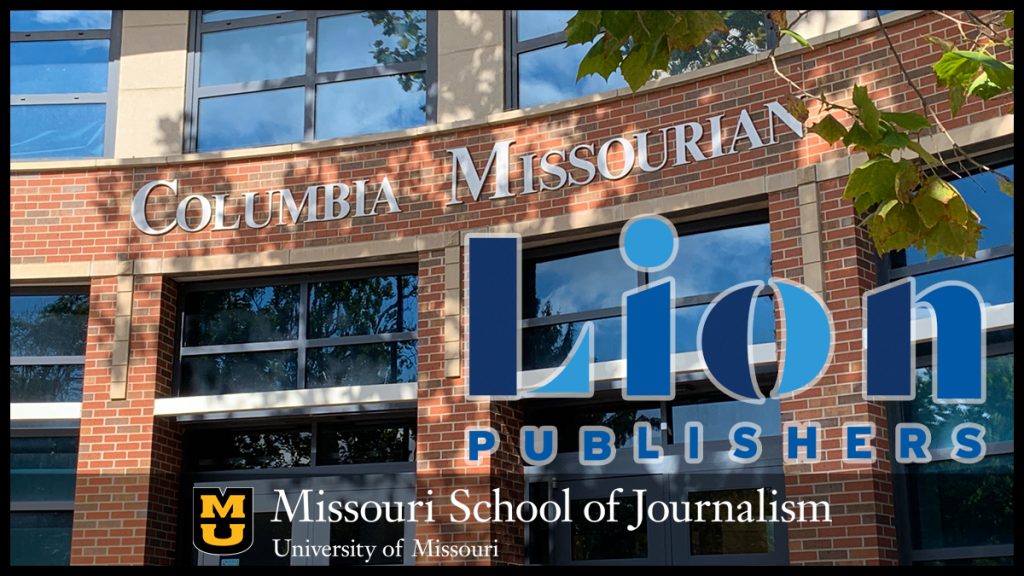 The Columbia Missourian has won a LION Local Journalism Award for Collaboration of the Year, with the Missouri School of Journalism’s community newspaper winning out over professional news organizations from all over the country. The award comes with a $2,000 prize from the Knight Foundation, a nonprofit that provides support for journalism and the arts.

“This collaboration not only covered an important topic, but also allowed for iteration based on early conversations with rural community members who helped brainstorm the stories that would be told,” noted the judges in an announcement from LION Publishers. “The fact that the entire project was driven by student journalists across multiple platforms and partner organizations is helping build a pipeline of future journalists that the industry needs.”

The award recognizes the Missourian’s collaborative approach to 2,500 Below, a series of stories about challenges and changes in rural Missouri communities. Over a span of four months, student journalists made use of the resources in the One newsroom to tell compelling multimedia stories that were published not only in the Missourian but on KOMU-TV, KBIA-FM and in Missouri Business Alert.

The Missourian was recognized in the “Medium/Large Revenue Tier” category, and the win comes in the publication’s first year of eligibility as a member of LION Publishers.

See the original story below for more about 2,500 Below and Show Me Shelter, another series of stories from the Missourian nominated for Outstanding Coverage.

COLUMBIA, Mo. (Oct. 17, 2022) — The Missouri School of Journalism’s community newspaper, the Columbia Missourian, has been named a finalist in two categories of the LION Local Journalism Awards: Outstanding Coverage and Collaboration of the Year. Winners will be announced Oct. 27-29 at the Independent News Sustainability Summit.

This recognition comes in the Missourian’s first year of eligibility as a member of LION Publishers (Local Independent Online News). Up against professional, independent news organizations from around the country, which range from investigative journalism outlets to public radio, community news and much more, the Missourian will now compete against two other finalists in each category.

“Seeing the Missourian named as a finalist alongside big names in industry innovation, like Block Club Chicago, is further proof of the impact of the School’s professional news outlets on the community and on the student journalists who receive a hands-on education while producing excellent reporting,” said David Kurpius, dean of the School of Journalism. “Under the tutelage of world-class faculty and staff, our students are creating news coverage that rivals work from the best community news organizations in the country.”

The Collaboration of the Year nomination recognizes the digital-first newspaper’s “2,500 Below” project, a series of stories examining the challenges facing small towns in Missouri that featured collaborative coverage across not only the Missourian but KOMU-TV, KBIA-FM and Missouri Business Alert. The project is the latest high-profile example of the work coming out of the One Newsroom, a space where reporters and managers from each of the School’s professional newsrooms work together to develop stories and projects that make the best use of each outlet’s strengths and resources.

“Seeing the Missourian named as a finalist alongside big names in industry innovation, like Block Club Chicago, is further proof of the impact of the School’s professional news outlets on the community and on the student journalists who receive a hands-on education while producing excellent reporting.”

The project was organized around a class made up of students working in different mediums — a trial run for a planned capstone course centered around the concept of multiplatform student journalists working together and learning from each other.

“The goal was to have our students learn how to work with people on different platforms because collaboration has become so important in our industry,” said Mark Horvit, who led the team of students as the course instructor. “It was also about thinking, ‘what’s the best way to tell each one of these stories? Which thing is a long-form text, which thing would work best as audio?’ This was a great project for the communities we covered and for the state, but it was also a great project for the students to have when they are going out to show themselves off for jobs and internships.”

Beyond winning the LION nomination and serving as a successful trial for a capstone course, the project will have another lasting legacy: One student built an interactive online tool capable of searching through more than 20 years of bills passed by the Missouri legislature and signed into law. Horvit said he regularly uses the tool — which is available free for public use — for statehouse coverage as director of the School’s State Government Reporting Program.

Another series of stories from the Missourian scored the finalist spot for Outstanding Coverage: Show Me Shelter, which delved into the topic of homelessness in the Columbia area and resulted in nearly 20 individual stories covering different facets of the issue. Fred Anklam, community editor for the Missourian, organized the group of student reporters and feels that the series had a real impact on the community.

“It really felt like the students’ reporting and enthusiasm for going after their stories really helped inform our community and encouraged the city to address [issues facing people experiencing homelessness],” Anklam said.

“The goal was to have our students learn how to work with people on different platforms because collaboration has become so important in our industry. It was also about thinking, ‘what’s the best way to tell each one of these stories?”

After the Missourian’s coverage of Wabash Bus Station, which doubles as a warming center overnight for those without shelter, existing calls for the city council to make the warming center available more often during cold periods reached a fever pitch. Ultimately, the council voted to raise the temperature threshold for opening the facility to 25 degrees or below, well over the initial 9-degree threshold.

Elizabeth Conner Stephens, executive editor of the Missourian, said the continuous and evolving nature of the coverage likely helped the series stand out amongst others in the running for the award.

“We can’t say for sure that our coverage influenced the city council, but we did see change happen as we continued this reporting,” Conner Stephens said. “We were able to follow those developments more closely because we had reporters tied in with sources and knowledgeable about what was happening — both with those who were unhoused and with the people who were supporting that community and raising awareness.”

Anklam added that the impacts of the stories weren’t confined to the Columbia community at large: they also left a powerful impression on the students and served as yet another example of the value of the Missouri Method approach of “learning by doing” at the School of Journalism.

“For students, seeing that people live on the street can be jarring,” Anklam said. “They are coming to a realization about how the world works, and it resonates with them. That’s what we’re always looking for as journalists: stories that resonate with people.”