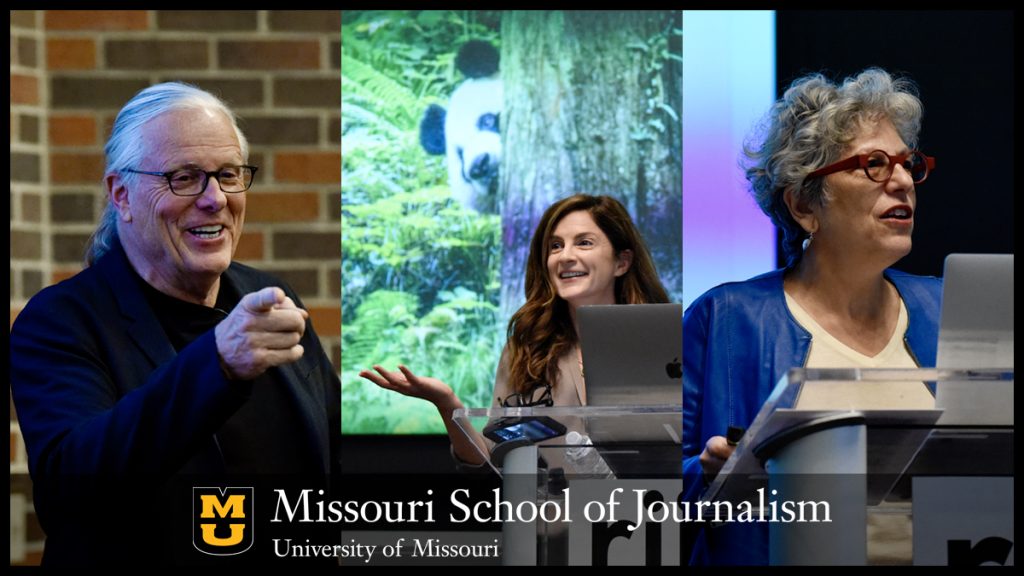 COLUMBIA, Mo. (Oct. 19, 2022) — Today, the 2022 Missouri Honor Medalists presented master classes to an audience of students and other guests in the run-up to accepting their awards this evening.

Each master class featured a lecture and Q&A from one of the honorees: Jeff Goodby, co-founder and co-chair of acclaimed advertising agency Goodby, Silverstein & Partners (GSP); criminal justice journalism organization The Marshall Project, represented by editor-in-chief Susan Chira; and Ami Vitale, an award-winning photographer and filmmaker.

“Hearing from giants of the industry about what they have learned and achieved in their careers is an incredible opportunity for our students to absorb rare and valuable insights,” said David Kurpius, dean of the School of Journalism. “As part of the Missouri Method, our faculty already bring insider knowledge and professional experience into the classroom to benefit our students. These master classes take that philosophy to the next level, allowing students to speak directly with some of the most talented and accomplished people ever to work in the industry.”

Goodby, whose GSP agency originated the got milk? campaign in 1993, spoke about what it means to be creative in advertising, an industry that is sometimes viewed reductively as a source of manipulative and disposable messaging.

“You have great power to make things people actually like, to mine their experiences to create something that people want in the world,” Goodby said. “It’s kind of a corporately-funded study of who we are, what we love, what we hate and what we’re drawn to.”

He also noted the ever-increasing importance of the “strategic” aspect of strategic communication, noting that the days of a brand hiring a marketing firm based purely on the strength of a previous Super Bowl ad are long gone.

“We’ve always been a company where people would see our stuff on TV and somebody would go, ‘get these guys who did that,’” he said. “That doesn’t happen as much anymore. What we do now is we attract people more with our ability to think, our ability to strategize, to look at the company and its problems and come up with strategic solutions.”

Chira introduced students to the Marshall Project’s approach to Pulitzer Prize-winning criminal justice reporting, which ranges from investigative pieces that reveal abuses and inequities within the system to stories that look beneath the surface of data about the system and feature the perspectives of incarcerated or formerly incarcerated people.

“We cover criminal justice, not crime,” Chira said. “When journalism focuses primarily on people who commit crimes, as it often does, then information like what kinds of sentences are being handed down to which people — and why — goes unexamined. If you only focus on people who shoot people, for instance, then you get a really distorted view of the criminal justice system.”

In particular, Chira highlighted the importance of data journalism in examining trends among the state’s prisons and incarcerated populations, which she explained is about more than compiling and regurgitating data released by the system — a principle illustrated by the Marshall Project’s Testify, an ongoing effort using a combination of court records and community input to examine disproportionate outcomes within the court system in Cuyahoga County, Ohio.

Like Chira, whose team reached out to incarcerated people around the country to develop people-centered language that avoids dehumanizing or belittling incarcerated people, Vitale emphasized the importance of sensitivity and building relationships in creating impactful journalistic work. She recounted that some of her most famous and enduring shoots, including her efforts to document panda-breeding efforts in China, were offered to her as a result of the good will and familiarity she had nurtured with conservationists and others who would think of her when a good story came along.

She also offered advice to students on what comes before the globe-trotting, emotionally shattering photography she continues to produce: the pitch.

Tracing her progression from covering war-torn communities to documenting the relationship between people and the natural world, she left students with a ringing endorsement of travel as a method of widening one’s viewpoint both as a journalist and an individual, noting that her work, which has taken her to more than 100 countries, “shapes how I see the world.”

The master classes were only one part of a busy day for the honorees, which also included speaking to individual journalism classes. Tonight, the three medalists will cap things off by accepting their awards at an evening banquet.