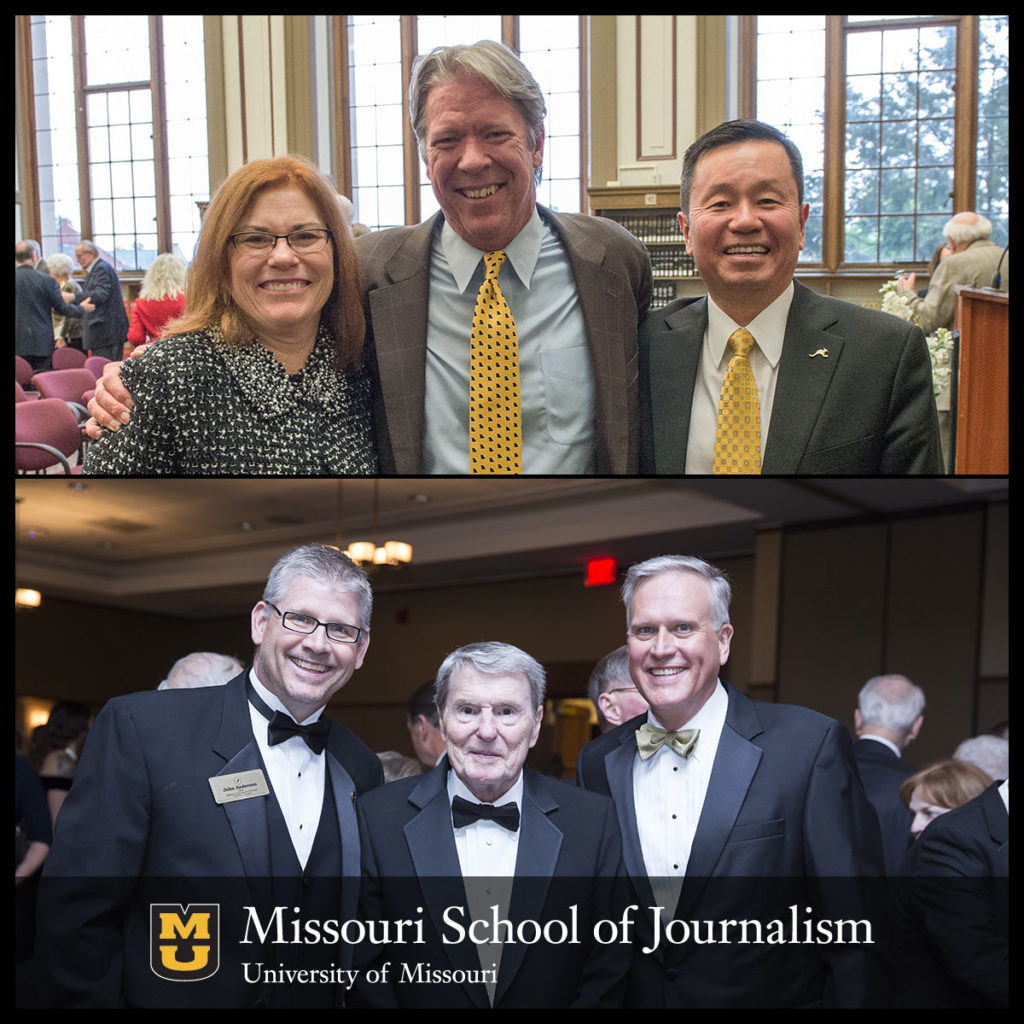 Columbia, Mo. (May 5, 2017) — Personal – engaging – in the moment: Award-winning journalist and co-founder of PBS NewsHour Jim Lehrer, BJ ’56, helped broadcast and convergence journalism students experience key moments in history during a weekend visit to the University of Missouri campus.

“He seemed very personable. When Lehrer explained how he used past tense in his interview with Clinton, it allowed students to realize it’s okay to make mistakes. Lehrer was still successful regardless of his mistake. He gave detailed stories that made us feel like we were in the moment with him,” said junior Hailey Jennings.

“Mr. Lehrer answered every question completely and thoroughly, so there was a lot to learn from his answers. His use of personal experiences in his answers – and looking every student in the eye after they asked a question – made it feel like we were having a personal conversation about journalism. It was very engaging,” said junior Ian Nickens.

“I enjoyed hearing Mr. Lehrer speak about the coverage of the last presidential election and what could have been done differently. He gave great examples while discussing the differences in coverage about each campaign,” said junior Sydney Olsen.

Lehrer addressed a packed room of Missouri School of Journalism students in the Fred W. Smith Forum at the Reynolds Journalism Institute at the School on Monday.

Lehrer said one of the most challenging trends in journalism today is the tsunami of information available for every person on every device. This has led to greater competition among journalists, and he cautioned against rushing to be first without first verifying the facts.

He talked at length about the importance of explaining to the American people the connection between serious journalism and a free and open society.

“What you are about to do for a living matters. It matters. This is not showbiz; you’re going into the business of democracy,” Lehrer said.

Lehrer said engaging audiences today is the question for journalists and that journalists have not done a good job explaining to the American people why facts matter.

Lehrer also talked about covering stories without bias. He told students that even though everyone has a bias, all can still cover a story fairly.

Lehrer was on the University of Missouri campus as part of Mizzou’s Donor Recognition Weekend. On Saturday night, Dean Dave Kurpius interviewed Lehrer on stage as the keynote presentation at the annual dinner for the Jefferson Club, which honors those who have made significant philanthropic contributions to MU.

John Anderson, BJ ’87, the award-winning anchor of SportsCenter, ESPN’s flagship program, and chair of the Jefferson Club’s Board of Trustees, served as the emcee.

On Sunday, members of the School of Journalism’s Dean’s Leadership Circle had the opportunity for a private brunch with Lehrer, where they got to ask questions and discuss trends in journalism with Lehrer.

In addition, Major Garrett, BA, BJ ’84, chief White House correspondent for CBS News, spoke at the Library Society reception on Friday evening. Garrett is president of the Missourian Publishing Association, the board that oversees the Columbia Missourian. His remarks echoed Lehrer’s about the importance of a free press in our democracy.

The annual celebrations for Donor Recognition Weekend underscore the importance of philanthropic support for both MU and the School of Journalism. Such support enables the School to support students, faculty, programs and facilities while staying on the forefront of journalism education. The School has two giving societies, the Walter Williams Society, which honors those who have made sustaining donations to the School, and the 1908 Society, which honors those who make an annual contribution to the 1908 Fund for Journalism Excellence.

Together, these two giving societies make up the Dean’s Leadership Circle. As part of this group, members receive insider updates and communication from Dean Kurpius and invitations to special events.

For more information about supporting the School of Journalism, contact the Office of Advancement at (573) 882-0334 or visit Giving to Mizzou.