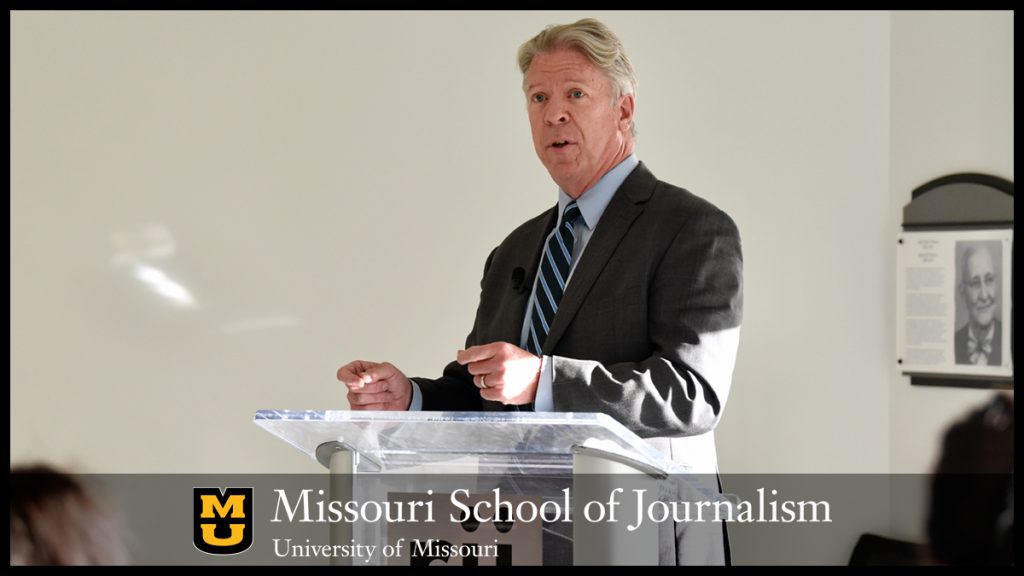 COLUMBIA, Mo. (Oct. 26, 2022) — Major Garrett, BJ ’84, chief Washington correspondent at CBS News, returned to the Missouri School of Journalism’s Reynolds Journalism Institute (RJI) on Thursday, Oct. 20 for a lecture and Q&A with faculty, staff, students and the public on the subject of truth in political reporting.

“I’m thrilled to welcome an accomplished alum and household name in political journalism back to the School of Journalism,” said David Kurpius, dean of the School. “As one of the best in the business, Major can share the firsthand knowledge and experience he has gained in his time interviewing presidents and covering national elections. Major is living proof of the value of the Missouri Method, both in his day-to-day work and in giving back through opportunities like the Boyd Lecture.”

As part of the Gerald M. Boyd Lecture Series on Politics & Press Responsibility, Garrett recounted how his experience of the 2020 presidential election cycle — which broke records for voter turnout and mail-in ballots cast — fostered a new appreciation for the work that goes on behind the scenes from election administrators around the country.

“I had missed, in all these campaigns I covered, this magnificent, decentralized structure in which we have ballots cast and counted in this country,” said Garrett, who also serves as president of the Missourian Publishing Association. “…It’s a beautiful, beautiful thing. It was tested like never before in the 2020 election, and it performed better than anyone could have imagined.”

“I have zero power — or an infinitesimally small amount of power — next to this woman’s comingled cauldron of pseudo-information.”

Yet the army of poll watchers, ballot counters and election officials who carried out that effort continue to be targeted with harassment and misinformation nearly two years later, causing many to fear for their safety. This, coupled with Garret’s newfound appreciation for the importance of election administrators, spurred him to write a book (The Big Truth: Upholding Democracy in the Age of “The Big Lie”) that he called “a love letter” to the people who make elections possible.

“Election administration is not the path to political power,” he said, drawing knowing chuckles from the engaged crowd in RJI’s Palmer Room. “These Americans answered a call on behalf of their country — a kind of low-level, desperate call from a nation in need. …Some are still hounded as they leave their place of work.”

Following the lecture, he took questions from the audience in a session moderated by Ella McCarthy and Olivia Sklenka, both seniors at the School of Journalism. The ensuing discussion touched on everything from his days as a student at the School to his views on how misinformation and disinformation spread in the age of social media.

Referring to a well-meaning but misinformed woman he once interviewed about the events of January 6, 2021, he noted that journalists alone cannot eliminate the spread of false information without help from other industries and platforms where such information proliferates.

“I have zero power — or an infinitesimally small amount of power — next to this woman’s comingled cauldron of pseudo-information,” he said.

Still, Garrett left the audience on a hopeful note. Tempering anxieties about where today’s partisanship and spread of false information might lead, he stressed his belief that the current political atmosphere does not compare to the deep, structural fault lines that emerged in the country’s most challenging eras of political turmoil.

The Gerald M. Boyd Lecture Series on Politics & Press Responsibility was created in memory of the 1973 Missouri School of Journalism graduate. Boyd was the managing editor of The New York Times and managed the newsroom during the Sept. 11 terrorist attacks. The following year The Times received six Pulitzer Prizes, the most a newspaper has ever received in a single year. Boyd went on to receive many more awards, including the Missouri Honor Medal for Distinguished Service in Journalism from the University of Missouri and Journalist of the Year in 2001 from the National Association of Black Journalists. He died in 2006 at the age of 56.