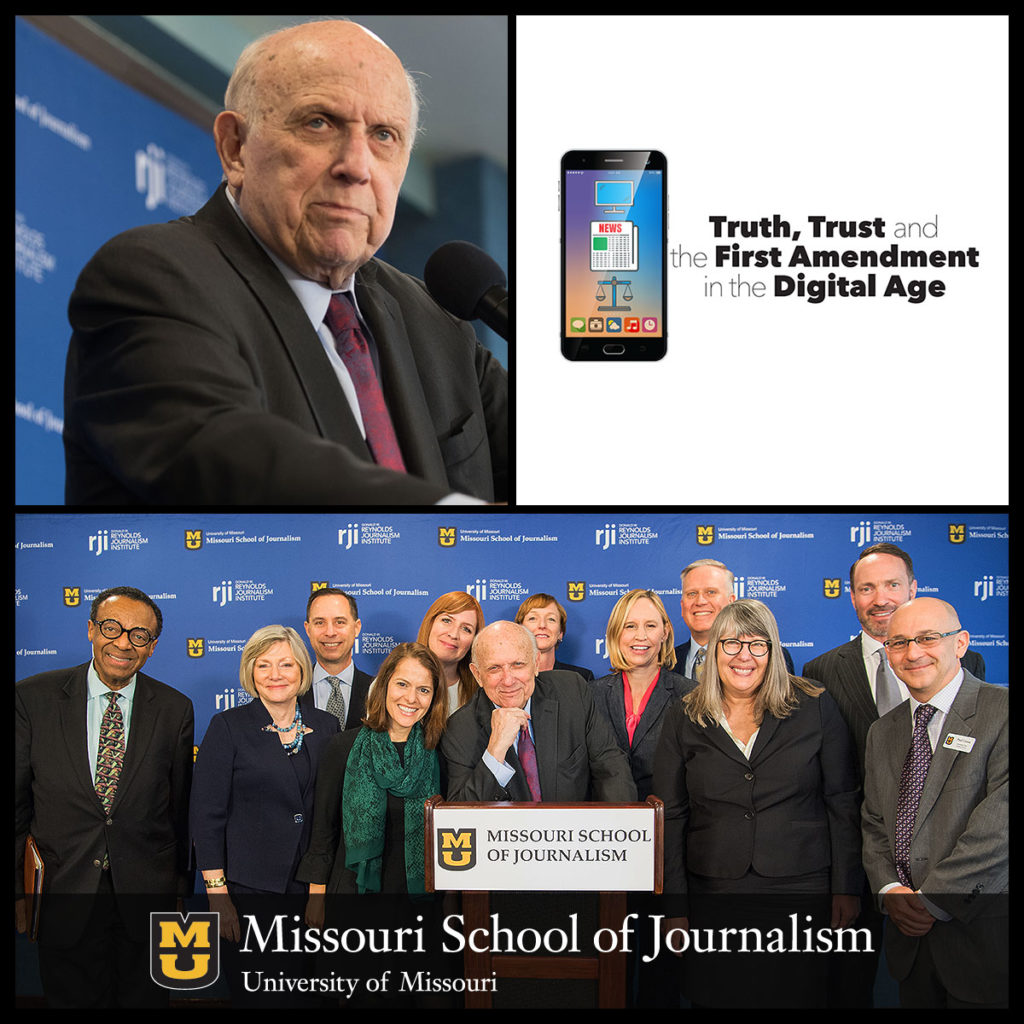 Washington (April 6, 2018) — “Truth, Trust and the First Amendment in the Digital Age” was the perfectly-selected name for this year’s Missouri-Hurley and Price Sloan Symposium as one of the panelists unexpectedly found herself in the news this morning.

Margaret Talev, president, White House Correspondents’ Association, had to react to the headlines that President Trump would again break tradition and not attend the organization’s annual dinner.

“I was on the phone discussing with the White House how to announce that the President didn’t intend to attend when Trump announced it on his own on the radio,” she said. “The message underscoring it is one of participation this year, and I think that’s a good thing. There is something a little bit different about their posture, the administration’s posture this year – the White House telling us that while the president himself doesn’t feel comfortable attending this year, he is going to actively encourage his Cabinet, his advisers, the executive branch who have received invitations to attend that dinner.”

Dan Balz, chief correspondent, The Washington Post, said Trump’s increasing claims that his outlet is a lobbyist for owner Jeff Bezos, and other statements like it, are “successful at delegitimizing the mainstream press and what organizations like ours and others have always done. There is a lot less that we do that is believed by the country.”

Renowned constitutional attorney Floyd Abrams provided keynote remarks. He stated that the things Trump says are “anti-First Amendment and he is at war with the press continuously, endlessly, with false charge of fake news.” Abrams dismissed speculation that the president is just making passing comments against the press; he believes they are part of Trump’s agenda.

Clarence Page, columnist, Chicago Tribune, said the recently-approved federal budget is a “big deal” but it is getting squeezed between stories about Stormy Daniels and Roseanne. In discussing the changing news cycle, he stated, “My column now gets posted when it’s live and it then appears in print later. I’m excited by it.”

Conservative commentator Chris Buskirk pushed back on the idea that what matters to Washington resonates with the rest of the country. In particular, he doubted citizens are really concerned about claims of Russian election interference and the criminal charges facing former Trump campaign manager Paul Manafort.

During the legal panel, Kurt Wimmer, co-chair, Data Privacy and Cybersecurity practice, Covington and Burling LLP, said, “Someone creating a ridiculous conspiracy online could find themselves facing a lawsuit on the basis of some fake news created solely out of speculation. If you can make it look online like credible press it doesn’t mean it’s actually journalism…that’s a problem and part of the issue today is defining who is a journalist.”

Sonja West, First Amendment professor, University of Georgia School of Law said, “Journalists have fewer protections than people realize…the courts say the press is just like everyone else and they have no special rights.”

The panelists also spoke to the hope and desire that journalism advocates and others can do more to help the public, especially young people, understand the value and importance of the First Amendment. Major Garrett, CBS News Chief White House Correspondent and a Missouri Journalism graduate, spoke about the importance of community newspapers as essential sources of information and how they must continue so truth and trust remain strong.