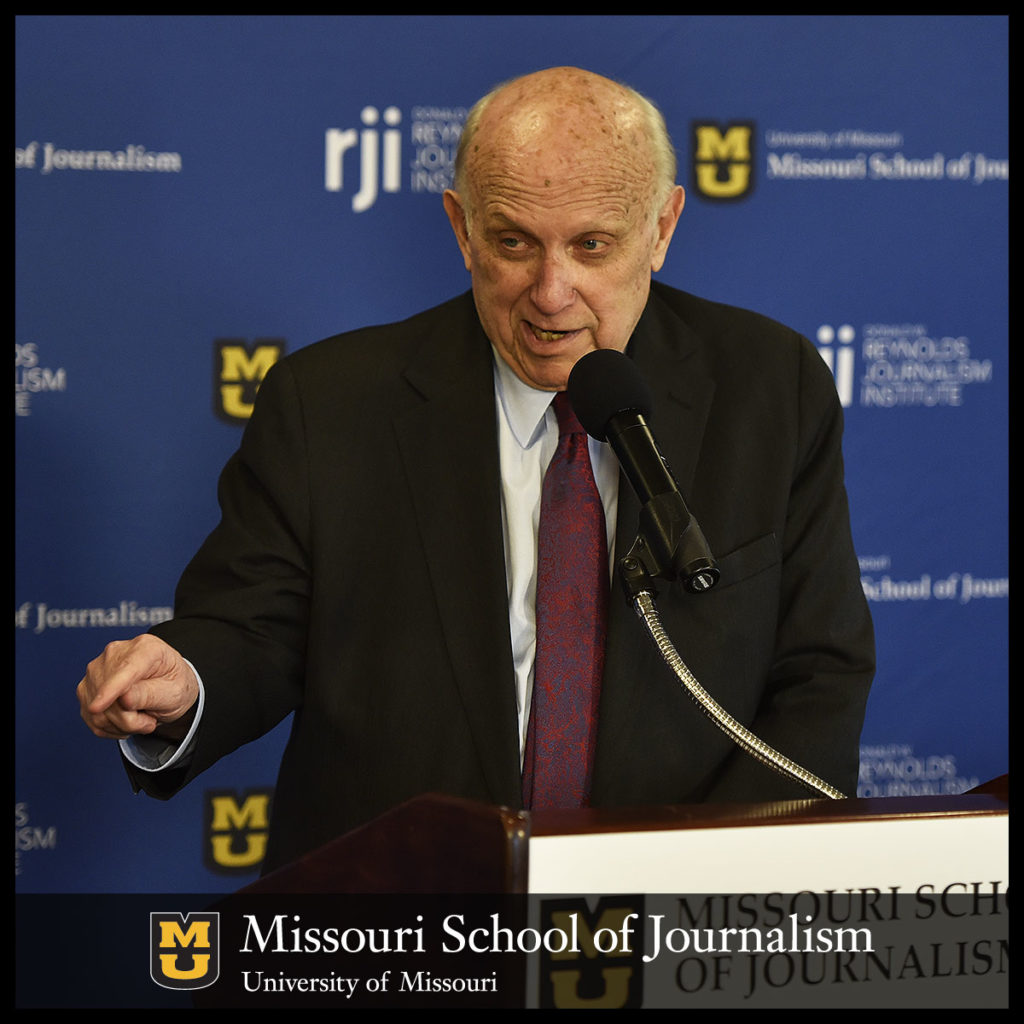 Renowned First Amendment lawyer Floyd Abrams shared his thoughts at the symposium, “Truth, Trust and the First Amendment in the Digital Age,” on April 6 at the National Press Club in Washington.

Abrams at 2018 Hurley Symposium: When it comes to Trump’s view of the press, “Words matter.”

Washington (April 16, 2018) — Renowned First Amendment lawyer Floyd Abrams pulled no punches in describing his view of the relationship between the press and the administration of President Donald Trump.

“The president is more hostile to the press than any of his predecessors in American history,” Abrams said in a keynote address at the 2018 Hurley-Sloan Symposium. “More hostile even than the Nixon administration.”

Abrams shared his thoughts at the symposium, “Truth, Trust and the First Amendment in the Digital Age,” on April 6 at the National Press Club in Washington. The symposium was sponsored by the University of Missouri School of Journalism and School of Law and included panels with leading Washington journalists and with media attorneys and legal scholars.

Abrams also said that Trump’s accusations against the press largely have not translated into policy changes or prosecution of journalists. He reminded the audience that it was John Adams who signed the Sedition Act of 1798. He also said Abraham Lincoln suspended the writ of habeus corpus several times during the Civil War to prosecute alleged Confederate-sympathizing journalists. He also spoke about how Theodore Roosevelt instructed his attorney general to indict newspaper magnate Joseph Pulitzer for critical articles his newspaper published.

“President Trump has done no such thing,” Abrams said. “[But] Trump is not by any means the first president to be unhappy with the press.”

Abrams said he viewed these as regrettable presidential errors but that he distinguished them from the current narrative between Trump and the press.

At one point, Trump said he intended to amend laws in order to make it easier for public figures to sue for libel, and also to prosecute leakers of secret information.

“Destroying the credibility of the core of the press…is very much at the center of what he wants to do as president,” Abrams said. “It is an agenda item.”

Abrams graduated from Yale Law School and rose to prominence when he served as co-counsel to The New York Times in the Pentagon Papers case. In that case, the Nixon administration sought to block the publication of secret government documents about the Vietnam War, citing national security concerns. Abrams and his co-counsel argued the case all the way to the Supreme Court, winning a decision that, to this day, makes it more difficult for the executive branch to exercise prior restraint on the media.

Abrams said that although he considers much of what the president says about the press to be “theatrical,” it still worries him when Trump speaks against the First Amendment-protected role of the press.

“Words matter,” he said. “It’s important that we take very seriously anything our president has to say about an institution as significant as the press.”

President Trump recently suggested that some media outlets should be required to register as lobbyists, but has not followed through with “regulatory muscle,” Abrams said. He also said that, because of Trump’s recent negative comments about Amazon and the Washington Post, it is likely that his administration will take some kind of action to punish America’s 12th largest company, even though Amazon’s founder and chairman, Jeff Bezos, owns the Post separately as a private individual.

Although the government cannot retaliate directly against individuals and corporations because of their views on public policy, Abrams said Trump may be building a case to punish Amazon in other ways – and Wall Street investors are taking notice.

“I can’t help but think that if Amazon finds its post office rates increased, or its multi-billion dollar deal with the Defense Department canceled – no matter what the reason was…then I would suspect, and I would not be alone, that it was because of President Trump’s anger at the publication of the Washington Post,” Abrams said.

Abrams also spoke about the evolution of the definition of the term “fake news,” especially as propagated by Trump. He said countries around the world are now using the term to justify prosecution and jailing of journalists.

Abrams said that one of the first countries to criminalize “false or exaggerated news” was Italy in 1925, under the dictatorship of Benito Mussolini.

“President Trump is no dictator,” Abrams said. “He would not support…legislation of that sort.”

But it is troubling that Trump has continually characterized the press as untrustworthy and biased, Abrams said.

Closing a day of panel discussions on the First Amendment and its meaning in a time where truth and trust in the media are being challenged, Abrams called the role of the press is vitally important to a healthy democracy.

“If the president believes or not that the press is the enemy of the public, it still is very dangerous, indeed, to try to persuade the public that [this] is so,” Abrams said. “We are not alone in the world in considering the problem of how a leader should…characterize the press.”