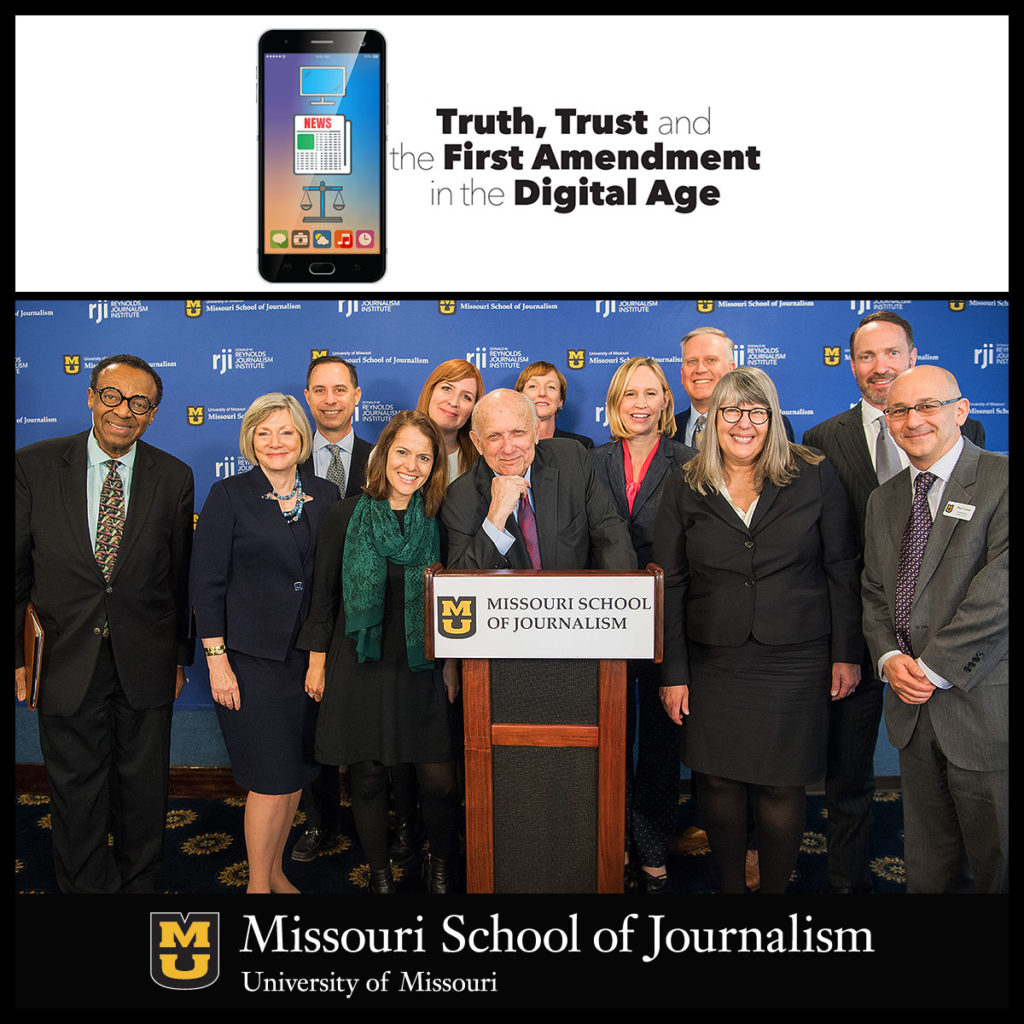 Washington (April 16, 2018) — Veteran journalists who cover Washington and the White House say President Donald Trump’s attacks on the news media have taken a toll and laid part of the blame for the decline in public trust on weakening sources of local news.

Journalists from the Washington Post, New York Times, CBS, CNN, Bloomberg and the Chicago Tribune shared their views in a discussion moderated by Barbara Cochran, Curtis B. Hurley Chair in Public Affairs Journalism, of the Missouri School of Journalism. The symposium also included a panel of lawyers and legal scholars moderated by School of Law Dean Lyrissa Lidsky and a keynote address by renowned First Amendment attorney Floyd Abrams.

Fittingly for the discussion of what it’s like to cover an administration that calls the media the “enemy of the people,” the journalists’ panel kicked off the session with an announcement that Trump, for the second year in a row, won’t be attending the White House Correspondents Dinner.

Margaret Talev, senior White House correspondent for Bloomberg and president of the White House Correspondents Association, said that although the president wouldn’t be coming, he has encouraged members of his administration to attend this year, a change from last year when no administration officials attended. White House Press Secretary Sarah Huckabee Sanders will be seated at the head table, Talev said.

Her fellow White House correspondents, Peter Baker of the New York Times and Major Garrett of CBS News, agreed that after one year, the day-to-day coverage of the Trump administration has largely been regularized.

“I wouldn’t say normalized,” Dan Balz of The Washington Post added, stressing that the level of hostility from the president towards the media is quite unprecedented. “I think that it is true that he remains at war with the press writ large.”

“There’s no doubt,” said Balz, “that he has been pretty successful in delegitimizing a lot of what the mainstream media…have always done, so there is a lot less that we do now that is believed broadly across the country.”

Garrett said Trump’s way of interacting with the press has completely changed the way correspondents cover the White House. While fewer and shorter White House briefings curtail reporters’ ability to question Sanders, he said, Trump is far more willing than President Barack Obama was to directly engage with reporters and generate news.

“There are far more people around the South Lawn, far more microphones and cameras, because you never know when the president’s going to walk up to you for 30 minutes,” Garrett said.

Talev said that while there is value in being able to capture the president’s thinking at any given moment, “the ability to write a consistent policy story that sticks and the ability to find the airspace for policy stories when there are so many colorful personality stories popping has created a real challenge for reporters like us who don’t necessarily trade in palace intrigue or the pure politics of the White House coverage as an art form.”

Unlike Obama, who was painfully careful about his decisions, Talev said, Trump blurts out at least four or five different versions of policies between the time you begin reporting and towards the end, making it very difficult to dive deep into any policy and its implications.

The Decline of Local Journalism

Clarence Page, an opinion writer for the Chicago Tribune, said that it’s just as, if not more, important to tell stories about politics in ways that have impact on local communities as it is to talk national politics.

“Folks in Southern Ohio want to talk about the tariffs on steel,” he said. “It’s very much more bread and butter out there.”

Hadas Gold, who reports on media and politics for CNN, agreed that trust in media has declined and said a lot of that has happened because local news is under economic pressure.

“Local media is where a lot of people begin their relationship with the media and where they have their closest relationship,” Gold said. “When that starts disappearing, they see us as sort of this mysterious people who fly into their states every now and then and talk to them for a few days and they don’t trust us like they trust somebody who lives and breathes and works in their community.”

Garrett agreed, saying, “If there’s something that’s very important for this country to wrap its arms around for the next 20 years, it’s what is going to be the model for community journalism.”

Talev echoed those concerns. Last year, through her work with White House Correspondents Association, she embarked on a national tour. She met with individuals in small cities around the country, asking them about their experiences with the media.

“The people who stayed afterwards to talk to us often wanted to talk about issues in their local communities, not about Russia or Stormy Daniels or the omnibus bill, but something happening in their hometown that they couldn’t get anybody else to pay attention to,” Talev said. “Rather than to see those people as just people who don’t understand us, it’s important to see those people as the people we need to reach the most.”

When asked about the challenge of restoring faith in the press as an institution, several panelists zeroed in on the need to educate audiences about the reporting process. They said that while journalists may assume news consumers have a basic understanding of how journalists work, this is not always the case and can compound distrust in the news media.

For example, Talev said research from journalism advocacy groups has shown that many news consumers believe anonymous sources used on background are not only anonymous to audiences, but to the reporters themselves. “It’s important for all of us to take a step back and realize that we speak a weird, special language that other people don’t speak,” said Talev.

Peter Baker of the New York Times said, “We do a terrible job of explaining ourselves.” One of the things the Times is doing to deal with this issue is to write pieces alongside its reporting that explain the journalist’s process. The goal is to help audiences better understand how the reporter got the story, what they do and how they make decisions.

Baker said it was also important to better differentiate types of coverage, whether that be news, opinion or analysis. “We blur the line so much these days that it’s not surprising our readers don’t see the difference between a news reporter and a commentator,” Baker said.

Balz warned against the dangers of social media. “Twitter is not our friend,” he said, adding that Twitter makes it possible to go further in expressing opinion than reporters would do in a news story.

He added that the cost of a mistake today is greater than it was in the past. “They play into the idea that we are deliberately trying to distort the news.”

As for the future, the journalists expressed hope that sticking to fundamentals will maintain the role of the press in a democracy. Talev said that journalists should tell the public, “We exist to help you. The First Amendment is about (the public), not us.”