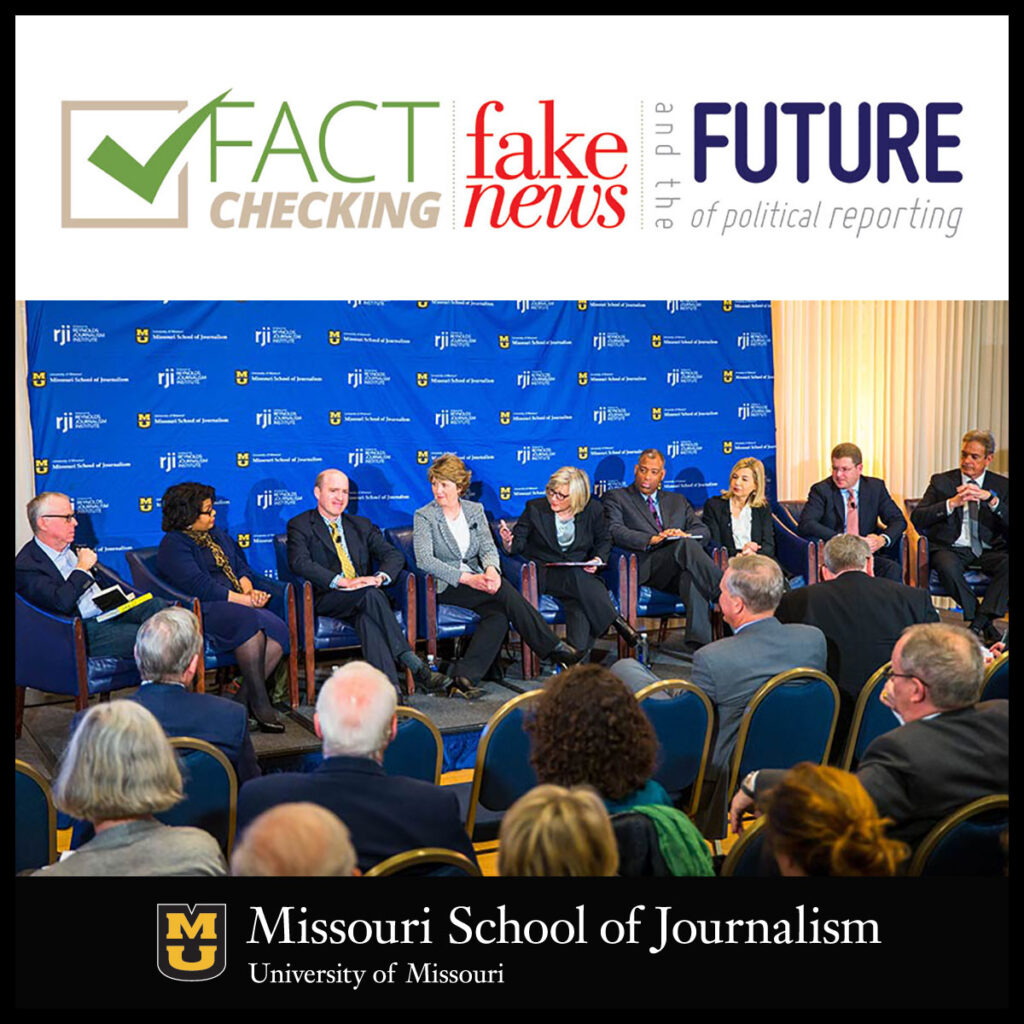 By Francisco Vara-Ortia and Riley Beggin

Washington (March 20, 2017) — “We’ve got to stop whining and just do our jobs,” Fox News Chief White House Correspondent John Roberts said March 9 at the 2017 Missouri-Hurley Symposium, “Fact-Checking, Fake News and the Future of Political Reporting.” The event was sponsored by the Missouri School of Journalism, the Reynolds Journalism Institute and the National Press Club Journalism Institute.

The question of how to approach the Trump administration’s antagonistic relationship with the press – and whether one could call it “whining” – was at the center of discussion for a panel of journalists in the Washington press corps.

After a political campaign in which candidate Donald Trump regularly denounced journalists as lying, lazy and corrupt, President Trump, in his first weeks in office, declared the news media to be “enemies of the American people.” A top aide, Steve Bannon, said the news media are “the opposition party.”

While most of the panelists agreed that the new administration’s rhetoric about the press creates new challenges, Mason, who also serves as president of the White House Correspondents’ Association, said that there have been “many things positive in terms of press access” in the first several weeks of the Trump presidency. He noted that the White House press corps is still working in the West Wing despite the rumors circulating before President Trump took office that they would be banished or relocated. He also mentioned that press briefings haven’t been abolished as once feared in the days leading up to Trump’s inauguration.

Stewart, who serves as president of the American Society of News Editors and helps oversee a national chain of newspapers, suggested that a disruption of routine may not be the threat some in the press corps perceive it to be.

“What’s happening in the White House is no surprise to anyone who has covered a local city hall,” he said. “People in local communities aren’t getting as exercised about this as we are.”

However, the panelists did discuss some boundaries they believe exceed the limits of acceptable behavior from the White House, and emphasized the importance of a free press to the American democracy.

In late February, multiple media outlets, including CNN and The New York Times, were excluded from a press gaggle held at the White House. The gaggle originated during the Clinton administration, when reporters would meet with the White House press secretary for a briefing, but no cameras recorded the encounter. The panelists agreed that excluding some news organizations crossed a line, because the gaggle has always been open to all reporters at the White House at that time, and merited collective action.

Stewart pointed out that journalists had also acted collectively in signing letters to protest the language about the press that was coming from the White House. “Public awareness is still fairly low on what this means in terms of democracy and the free exchange of information,” Stewart said, noting that he believes the time for such statements may be waning. “We need to get more creative in telling the American people how this can become a challenge to freedom for all citizens.”

Rosenstiel noted that while citizens should be reminded of the importance of the press, journalists have a responsibility to regain the public’s trust, as research shows millennials and minority communities feel the mainstream media doesn’t really speak to them or hold the greatest credibility.

“By calling the press the enemy of the people, [the White House has] given us a challenge, but there’s also a trap there,” he said. “And the trap is if we become too emotional or hysterical. The public needs us to be professional and clinical.”

Sullivan said it’s fair to acknowledge how reporters today may feel in the heat of the moment — “It does feel like you’re battling” — but ultimately emphasized that media needs to be cautious in how they frame their watchdog coverage of the Trump administration. She then cited a quote from her editor at The Washington Post, Marty Baron: “We’re not at war with the administration, we’re at work.”

Another topic that arose in the panel, as it had earlier during the symposium in a preceding session on fact-checking, was the use of the word “lie” when it came to characterizing President Trump’s statements.

CNN’s Feist said the word “lie” should hardly ever be used in reporting, as “falsehood” may be a more precise word to classify false information elected officials are saying, but it’s been hard to pin down the right word.

“We are not used to high-ranking officials saying things that are absolutely not true and we have to point it out, we have to say when something isn’t true,” Feist said.

While the uncertainty and unpredictability of reporting on the Trump administration may have the press corps on their toes, Bumiller says an upside is that journalists and those observing them are reminded of the importance in keeping the powerful accountable by working sources and doing thorough public service reporting.

“There’s a renewed sense of mission right now,” Bumiller said. “People are working around the clock. They are working really hard. But it’s sort of opened people’s eyes — and you could argue that they should have been more open before — about what our role is. And that is to hold the administration accountable, through tough, fair-minded coverage.”

Ryan said that in the end the press corps will endure on behalf of the public, which needs the information journalists work so hard to acquire.

“People like to knock the media. Well, guess what, when you want to find out what’s going on, where do you go? You come back to us, because you know we’re tried and true.”

Francisco Vara-Orta and Riley Beggin are graduate students at the Missouri School of Journalism. They are participating in the school’s Washington Program and will graduate in May.