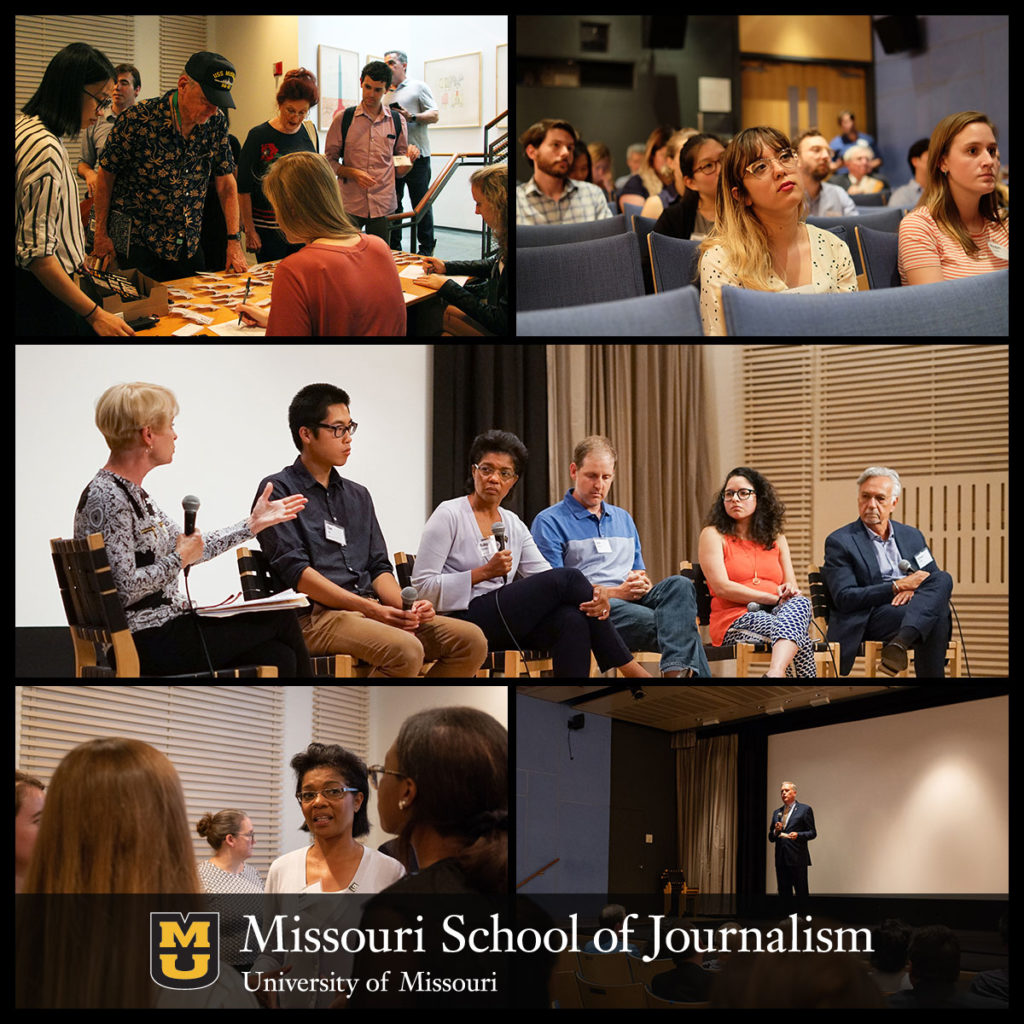 The future of news and freedom of the press were the topics at a Missouri School of Journalism screening of the documentary “Fight for the First” July 26 at the Scandinavia House in New York City.

By Madi Skahill and Savannah Walsh

Columbia, Mo. (Aug. 15, 2018) — Alumni, current students and guests of the Missouri School of Journalism tackled topics of the future of news and freedom of the press at a panel discussion and screening of the documentary “Fight for the First” on July 26 in New York City.

Sponsored by the Reynolds Journalism Institute and organized through the School’s New York Program, the event at the Scandinavia House in Manhattan began with the 2017 documentary by filmmaker Sharon Liese. The film sheds light on the current state of press freedom in the United States through the eyes of past and current MU students and editors working in the newsroom at the Columbia Missourian.

The screening was followed by a panel discussion moderated by Marcy McGinnis, a consultant and career coach who formerly served as senior vice president for news at CBS News and at Al Jazeera America. The panel included Geraldine Cols Azocar, Ruby Bailey, Steven Reiner, Tim Tai and Seth Wenig.

“This is a critical time in the history of this country, and we need the fourth estate – we need journalism – to be supported in ways that stand up to support our democracy and ensure its future,” said Missouri School of Journalism Dean David Kurpius in his opening remarks before the film. Kurpius affirmed the school’s commitment to rising to this challenge and mentioned expected changes in the School’s academic structure, a planned new building and ongoing collaboration with the Religion News Foundation. “We’re standing up for the First Amendment broadly – thinking about all the elements of the First Amendment, not just the freedoms of the press,” Kurpius said.

McGinnis, who spent over three decades in her career at CBS News and helped establish the School of Journalism at Stony Brook University in 2006, began the panel by reciting the First Amendment and asking each panelist what the First Amendment meant to them as well as what some of their personal encounters were with barriers to this freedom.

Discussion naturally shifted to Tai, a 2016 graduate of the School and current staff photographer at the Philadelphia Inquirer who had a spotlight moment in the film captured during his experience with the MU campus protests in Fall 2015. Tai was on assignment for ESPN at the time when he was shoved and blocked from taking pictures of students celebrating the resignation of former UM System President Tim Wolfe.

“I think from just a purely practical standpoint, when you’re covering something as a journalist, getting in a confrontation almost never really pays off journalistically,” Tai said. “If it’s with the cops, the cops will always win. If it’s with people you’re trying to cover, they’re just not going to talk to you. I didn’t get better photos because I stood my ground.”

Fellow photojournalist Wenig, who also attended the School, agreed, citing similar struggles with closed-off and hostile sources that he’s come across in his time as a staff photographer for the Associated Press – specifically covering stories such as the Occupy Wall Street protests and other public movements.

“One thing I try to tell people if that kind of comes up is I say, ‘Would you rather have me not reporting? What are the alternatives to there being no journalists?'” Wenig said.

Also on the minds of some panelists was the topic of staff cuts at news organizations. Just a few days prior, half of the staff of the New York Daily News was laid off. Reiner, a Stony Brook University associate professor who previously worked at CBS News “60 Minutes” and NPR‘s “All Things Considered,” lamented the fall of what was once one of the most widely read publications in the country.

“One of the most worrisome things is that a perfect storm seems to be developing,” Reiner said. “Because it’s not just this administration. It’s not just the president. It’s what’s happened to the economic underpinnings of the news medium – particularly with the print medium.”

Azocar, BJ ’06, a video producer for NBC News and MSNBC, remarked more firmly: “I do feel that our profession is in peril.”

Though both the film and panel shed light on the obstacles that journalists face, when asked what gives each of the panelists hope, Reiner credited the people sitting around him on stage, and Tai voiced comfort in the tangible impact of journalism. “I think we can get very down with a lot of the political climate and the attacks that people have on journalists,” Tai said. “But in another way, doesn’t it also kind of inspire you and make you want to work harder and remind you why (the work) is more important?”

Bailey gave attendees a glimpse of what her time as executive editor at the Missourian might bring by citing the students with whom she has already collaborated as the source of her optimism. Bailey recently started at the Missourian after working as a city desk editor at the Sacramento Bee, and before that as a reporter and editor at the Detroit News and Detroit Free Press. Though only having worked at the School for a few weeks, she said the quality of the reporting speaks for itself.

“If you can imagine how much growth that can happen in just three weeks, I can then imagine just how much more they’ll continue to grow until they are like Tim,” Bailey said. “I’m hopeful by nature, but again, I have a concrete foundation for my hope, and it’s all of them,” she said, pointing into the audience.

The School’s year-round New York Program offers students an opportunity to spend a summer, fall or spring semester in the city doing a professional internship and participating in a unique academic experience. The program is overseen by program director Reuben Stern, BJ ’93, MA ’16. Twenty students enrolled in the program during summer 2018 attended and assisted at this event.