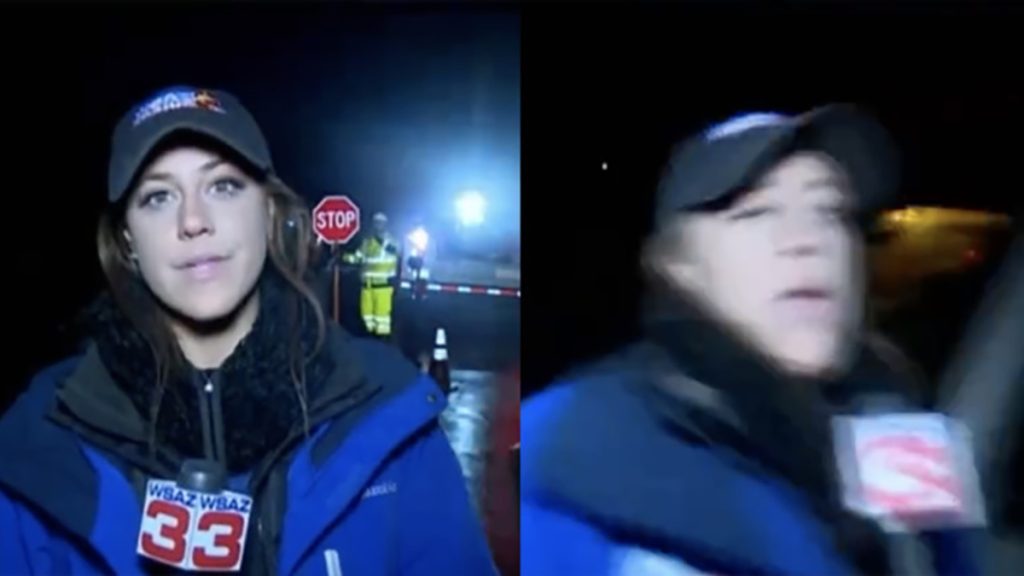 Columbia, Mo. (Feb. 22, 2022) — West Virginia television reporter Tori Yorgey was struck by a car during a live broadcast in late January, an incident that reverberated throughout the journalism industry despite the reporter seemingly brushing it off at the time.

The New York Times and others reported on the outrage the episode provoked from those in the TV news industry, many of whom felt that the increasingly common “multimedia journalists” (MMJs) — who, as in the case of Yorgey, must not only deliver live reports but also set up the camera and coordinate the live feed to the station — are sometimes asked to put their safety on the line to multitask work that was once done by two or three people. In addition, Yorgey’s live report was about a late-night water main break, a story that struck many as inconsequential compared to the risk of sending the reporter to the scene on her own.

One month on, it remains to be seen whether the shockwaves are signifiers of change in the industry, but at the Missouri School of Journalism, people are taking the incident — and the questions it raises — seriously.

Jeimmie Nevalga, news director at KOMU-TV in Columbia, Missouri, has firsthand insight into the push and pull between the realities of the industry and the needs of the reporters who keep it running. KOMU-TV functions not only as a NBC-affiliated local news station, but also as a professional training ground for students at the Missouri School of Journalism, making the station an important barometer for both the present and future of the industry.

After the news broke, Nevalga huddled with her team of student reporters and producers at the station, zeroing in on one of the most striking aspects of the story: the reporter’s willingness to continue with the live shot after being struck by an SUV.

“The conversation we had that day was, ‘it’s okay to not be okay,’” Nevalga said. “I don’t need anyone to play off that they’re not all right. I want reporters to feel that it’s okay to be vulnerable, because if you keep going and don’t take stock of how you feel, you might witness or experience things you don’t process until much later. We want to get away from the idea that reporters are not allowed to be human.”

Indeed, a few days after the incident, Yorgey recounted the experience in terms that differed from the steel will she displayed during the broadcast.

“It was really scary and I definitely shed some tears after that live shot,” Yorgey said in an interview with the Pittsburgh Tribune-review.

Before the West Virginia incident, KOMU-TV recently changed its policy for reporters performing early morning live shots. Now, these reporters must be accompanied by a “buddy” who helps coordinate the shoot. And if no buddy can be found, the reporter must stay at the station.

The trend toward hiring MMJs shows no signs of slowing, given that they are a handy way for news media to manage tight budgets and accomplish certain tasks — including live shots — more efficiently. Nevalga said this means her newsroom must always maintain a balance between preparing students for the demands of the workplace and instilling a sense of boundaries, situational awareness, and a safety-conscious mindset.

“I think the students need to learn about MMJ-ing, but they also need to learn what is and isn’t acceptable,” Nevalga said. “At certain times of day or in certain situations, they should never be by themselves. We have a greater responsibility being an educational institution in addition to a TV station; not only do we need to keep our students safe, but we need to prepare them to be safe once they leave here.”

Before the West Virginia incident, KOMU-TV recently changed its policy for reporters performing early morning live shots. Now, these reporters must be accompanied by a “buddy” who helps coordinate the shoot. And if no buddy can be found, the reporter must stay at the station. Other circumstances, such as covering street protests, also warrant the buddy system.

Stacey Woelfel, who served as KOMU-TV’s news director for 24 years before becoming the director of the School of Journalism’s Center for Documentary Journalism in 2014, recalled when MMJs were only just beginning to emerge as a cost-cutting measure, and said he immediately recognized some of the drawbacks of the approach.

“You have one person doing the jobs of two,” Woelfel said. “This reporter had to set up the camera, set up some lights, find a location, make sure she had audio, and do everything else involved in setting up a live shot. All of that time could have been used not only to ensure safety, but to be a reporter. Doing more interviews, asking more questions, finding more sources. Everything gets cut in half when you have one person doing the job of two.”

Since MMJs are now ubiquitous throughout the industry, Woelfel thinks Nevalga’s approach is probably the best way to address the drawbacks of solo reporting while ensuring students are adequately prepared for the situations they will face in their careers.

“MMJs are the norm now, even in larger markets,” Woelfel said. “So Mizzou takes the students through and says, ‘you’ve got to get used to working by yourself. It’s almost certainly how you’re going to work when you leave here, so go ahead and do stories on your own. But if there’s a situation where there might be some risk, then we’ll keep you in pairs.’

Still, while eliminating MMJs is probably not in the cards, Nevalga thinks there are plenty of lessons to take away from the incident in West Virginia. Chief among them? Keeping things in perspective.

“Part of what you learn working in TV news is that the show must go on,” Nevalga said. “I think we need to rethink that to a certain degree. We tell our students, ‘if you feel unsafe in any way, I don’t care about the live shot. You don’t need to push through.’”