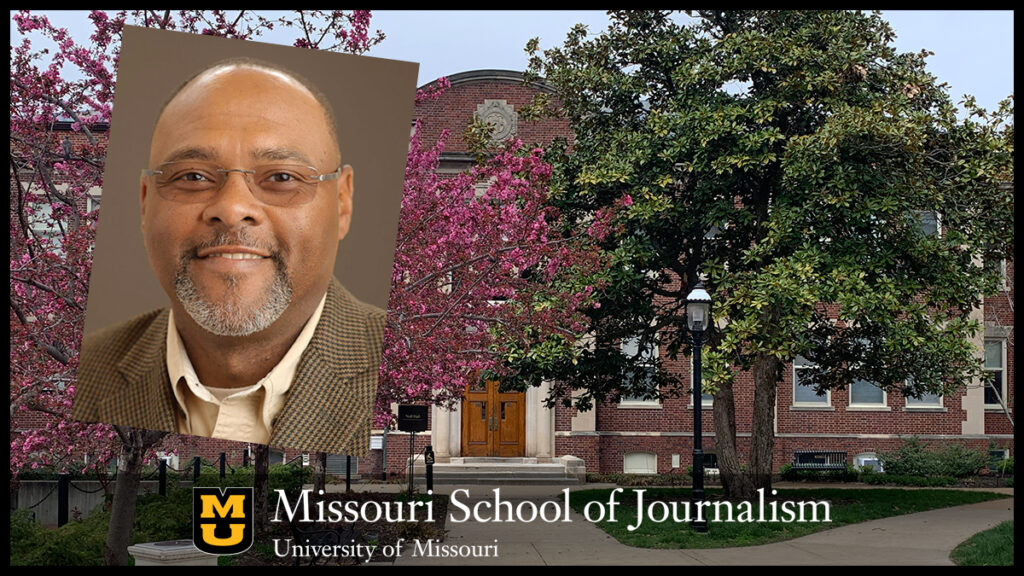 Perry is the 2021 recipient of the Lionel C. Barrow Jr. Award for Distinguished Achievement in Diversity and Research.

Columbia, Mo. (May 20, 2021) — Earnest Perry, associate professor and associate dean for graduate studies and research, has been chosen to receive the 2021 Lionel C. Barrow Jr. Award for Distinguished Achievement in Diversity Research and Education by the Association for Education in Journalism and Mass Communication (AEJMC). The award will be presented to Perry during AEJMC’s annual conference Aug. 4-7.

The Barrow Award recognizes outstanding individual accomplishment and leadership in diversity efforts for underrepresented groups by race and ethnicity.

“Thank you to the Minorities and Communication Division and the Commission on the Status of Minorities for this award,” said Perry. “This is not just for me. It is for the Missouri School of Journalism and to those who work every day to infuse our programs with the tenants of diversity, inclusion and equity.”

“Dr. Perry’s dedication to and strong work in the area of inclusion, diversity and equity has benefited numerous students, faculty and staff,” said Dean David Kurpius. “His ability to understand the complex systems that are core to a functioning university and school and then address inherent inequities systematically forms the core of his work and is why he deserves this recognition. I am honored to have him serving as associate dean and I am proud of his significant and ongoing work.”

Perry’s co-edited the book, “Cross-cultural Journalism: Communicating Strategically About Diversity.” It was developed out of the first required journalism diversity, equity and inclusion course in the country. Adopted nationally at other universities and now in its second edition, the book is designed to teach college students to critically think about issues of diversity, equity and inclusion in the work of journalism and strategic communication with a strong connection to the history and context of this work in our society.

“Dr. Perry encourages discussion in classes—sometimes lively, always respectful—and he challenges students to analyze their own assumptions about the way they think about differences among people,” said Kurpius. “Both undergraduate and graduate students have flocked to him for classes and advising. His mentorship—the hidden teaching work—is significant and ongoing.”

Perry’s research interests center on African-American press history, specifically the Black Press during the first half of the 20th Century. Perry has also done research  on the media’s role in serving underrepresented groups and the lack of ethnic minority journalists in the mainstream media.

Perry has published articles on history and media management in several journals including American Journalism, Journalism History and Journalism and Mass Communication Quarterly.

His professional career includes stints as a reporter for newspapers in Illinois, Connecticut and Texas. He has also served as a consultant to news outlets in Texas and Missouri on issues such as newsroom management, reporting in ethnic minority communities, news writing and editing.

Dr. Lionel C. “Lee” Barrow, Jr. served as an advertising executive and civil rights activist and retired as the dean of 10 years from the Howard University School of Communications in 1985. During his life Barrow chaired various committees and commissions that worked to increase the number of women and minority students in the communications field.

The AEJMC created a graduate scholarship in his name in 1970 and following his death in 2009 the Minorities and Communication Division and the Commission on the Status of Minorities created the Lionel Barrow Jr. Award in order to recognize leadership in diversity efforts and honor Barrow’s lasting impact.

AEJMC is a nonprofit, educational association of journalism and mass communication faculty, administrators, students and media professionals across the globe. Dedicated to promoting the highest standards for education, the Association provides an abundance of resources for news, research and career opportunities, including a multicultural network of practitioners from every discipline of journalism and mass communication.