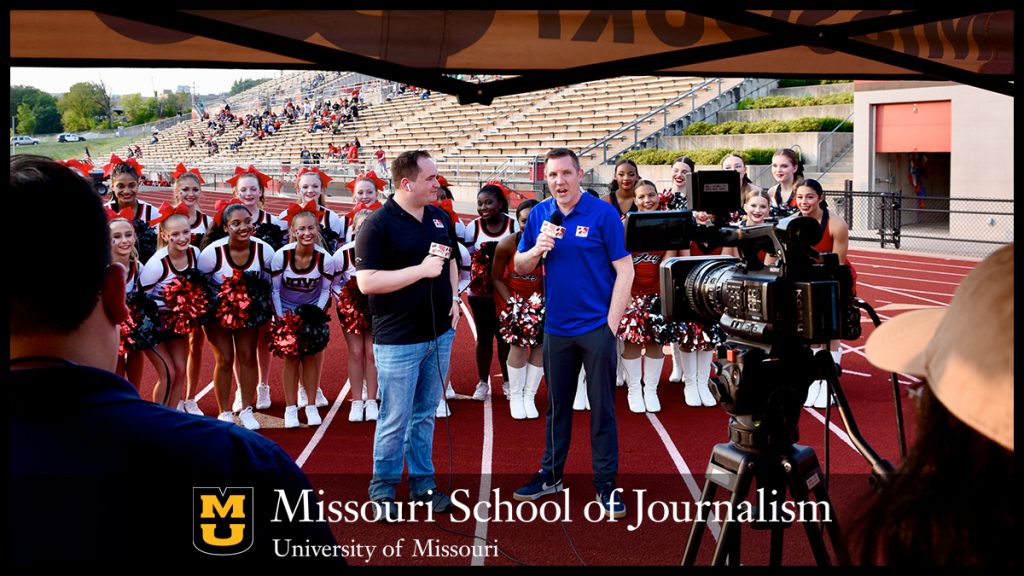 Columbia, Mo. (Sept. 14, 2021) — On the eve of the 20th anniversary of Sept. 11, 2001, KOMU-TV’s Ben Arnet rounds up his students, who are preparing to fan out across Mid-Missouri armed with video cameras. This is the third week of Friday Night Fever, the station’s decades-old tradition of sending groups of students to film highlights from about 15 local and regional high school football games each Friday and put the footage together in time for the 9 and 10 p.m. newscasts.

The program is a massive undertaking from the Missouri School of Journalism; with two nights of football coverage under their belts, the students are only just beginning to find a rhythm, but Arnet, the station’s sports director, seeks to drive home the importance of the day.

“Twenty years ago, the horrific events of Sept. 11 made us stop in our tracks,” he tells the students. “As a country, everything came to a halt. Even the stock market shut down. But that Friday, we played high school football.”

Arnet’s goal is to prepare the students for the memorials and related events they might be encountering at the games, and to impress upon them the gravity of an event that many in the room had not been alive to witness. But there is a deeper meaning behind the remarks. High school football might not seem like the big-time for a student who dreams of anchoring at ESPN, but for many communities, it serves as a rallying cry — a point of pride that endures through good times and bad.

“Everyone wants to cover SEC football,” Arnet says later. “It’s important for students to see how many resources go into covering high school games, and to see how that builds a stronger connection to the community. We care about every town we touch, and we want to train reporters who feel the same way.”

Each Friday during the high school football season, Arnet and meteorologist Matt Beckwith deliver their sports and weather segments live at 5 and 6 p.m. at the site of one of the night’s games. It’s the first production in a long night of filming and editing for both students and KOMU-TV staff, culminating in a reel of highlights that will air on the nightly newscasts and representing one of the most far-reaching football coverage efforts from a local TV station in Missouri.

On Sept. 10, the site is Jefferson City High School. The Jay Birds are set to take on the Bruins of Rock Bridge, who have traveled 30 miles south from Columbia. As the clock ticks down toward 5 p.m., the tent shading the broadcast camera and housing mostly student production assistants is a flurry of controlled chaos.

“Where’s our interview?” Arnet calls out.

The plan is to open the sportscast with an interview with someone from the Jeff City program, but the interviewee is nowhere to be seen. The weather is mild, as Beckwith will soon tell the viewers at home, but Arnet is beginning to sweat.

“I’m working on it!” replies Lauren Spear, a 2020 School of Journalism graduate who now works in the station’s promotions department.

She bolts from the tent, chattering into her earpiece. Jack Lee, another graduate of the School who is currently pursuing a business degree, informs producers back at the studio that the interviewee hasn’t shown up. Meanwhile, Arnet and Beckwith make the snap decision to open with the weather and a preview of the football matchup, hoping the interview will materialize later in the newscast. A flurry of hand signals from Lee and junior Kate Boles keep the anchors updated on timing, and everyone is talking into their earpieces, discussing last-minute shifts to the schedule and contingency plans if the interview does not happen.

Of course, the newscast ends up going off without a hitch. Spear succeeds in tracking down Jay Birds athletic director Jordan Chapman, whose interview closes out the show. The 6 p.m. cast also runs smoothly, and features senior Sterling Price going live to introduce a sports story he filmed and edited over the past week. The interview clinched, Spear moves on to wrangling Jeff City cheerleaders, who help close out the show with a cheer.

For Boles, the high-pressure nature of coordinating a live broadcast is part of what makes Friday Night Fever a valuable opportunity — an example of the School’s emphasis on the “Missouri Method” of learning by doing.

“I wanted to get into this station before I was assigned to it, because I want to become a producer,” Boles says. “The more you know about the process, the smoother everything runs. This is a great learning experience.”

Spear, who graduated during the height of the pandemic when classes and graduation ceremonies were taking place virtually, seized on the opportunity to return to KOMU-TV so soon after earning her degree.

“To come back and be working with students again, it gives me some closure,” Spear says. “Plus, it’s fun. This never gets boring.”

If the live newscast is never boring, what happens after certainly isn’t, either.

No sooner does the newscast end than a batch of students from KOMU-TV and the Columbia Missourian descends onto the AstroTurf to cover the game itself. Chase Matteson, a junior, is mentoring freshman Hunter Walterman in filming the action for TV with a handheld camera. Once the game begins, they dash along the Jeff City sideline from endzone to endzone, searching for the perfect angle and trying to anticipate where the ball might fly during the next play.

At the same time, journalism graduate student Veronica Townsend has taken over the School’s Instagram page, covering the work of her fellow students and other happenings at the game. During halftime, she manages to catch a few candid shots of NBA star and Jeff City alum Ogugua Anunoby signing autographs for students.

On the other side of the field, where a congregation of Rock Bridge fans cheer their team on toward a decisive victory, Missourian photographers Kalyn Laire and Tanishka R. are dividing and conquering for Friday Night Sights, the Missourian’s weekly collection of photos from high school football games that runs parallel to Friday Night Fever. Laire, a freshman, is getting her feet wet.

“This is my first Friday Night Sights, and I’m a little nervous,” she admits. “But this is why I’m at the best journalism school in the country.”

Laire, who is tasked with snapping fans and other non-action shots, hangs back a bit at first, seemingly dwarfed by the raucous swarm of Rock Bridge teenagers whooping and hollering in the bleachers beside her. But before the game reaches halftime, she has developed a feel for the crowd and weaves between them, capturing the way their reactions ebb and flow in tune with the action on the field.

Perched on the sideline, journalism graduate student Tanishka is charged with taking action shots for the Missourian, a task she values for the precision it requires.

“Shooting sports, you need to be very present, because you never know what could happen next,” she says. “You need to have eyes everywhere.”

As if to prove her point, she pauses and drops into a crouch as Rock Bridge attempts an onside kick. “This looks interesting,” she mutters. The players form a wall, sprinting forward in tandem with the kicker. Tanishka snaps a photo just as the kicker connects with the ball. Elsewhere, Matteson and Walterman film the play as it unfolds, and Laire captures the Rock Bridge fans as they erupt.

“Opportunities are everywhere,” Tanishka says with a smile.

Want to see more photos of our students in action? View our album on Facebook

All photos copyright 2021 Curators of the University of Missouri