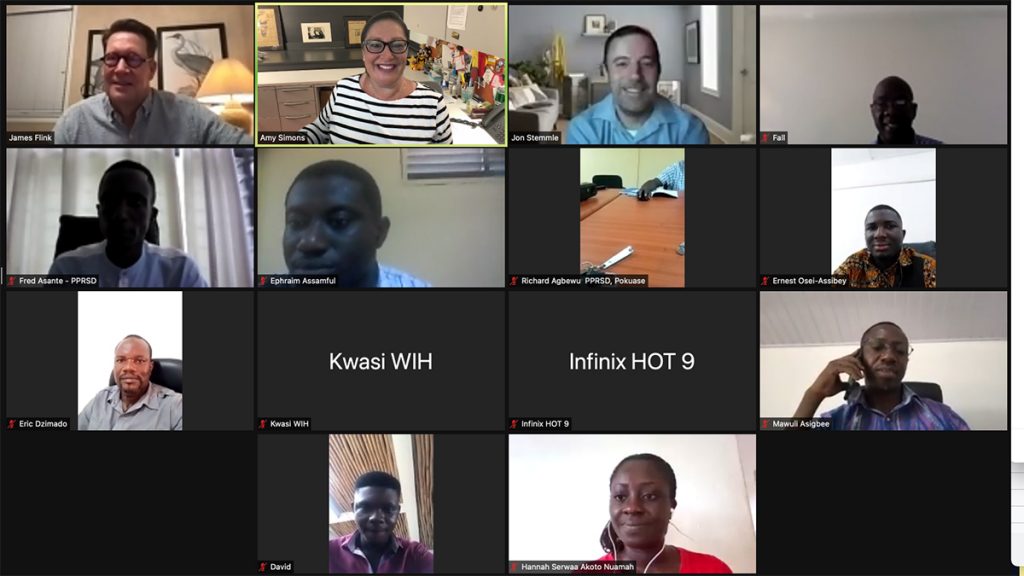 Columbia, Mo. (Aug. 30, 2021) — Researchers at the Missouri School of Journalism are helping people in Africa improve communication about pesticides in their countries, the latest effort from the School to improve how science is communicated to the general public.

Funded by a USDA grant and backed by research into how pesticides are covered in the media throughout the continent, the researchers are holding ongoing virtual workshops in countries across Africa to teach people about storytelling, identifying misinformation, shooting and editing videos, and other communication skills.

“The goal is to help people — whether they are regulators or PR representatives or anyone else — communicate with the public and the media accurately and effectively about pesticides,” said Professor Jon Stemmle, chair and professor of Strategic Communication in the Missouri School of Journalism. “Being able to tell truth from fiction on the internet and in journalism is so important today, and when you’re dealing with a topic as contentious as pesticide use, reputations are on the line.”

The workshops are conducted over Zoom by Stemmle, Professor Amy Simons, and Associate Professor Jim Flink, experts who together represent six decades of experience in journalism, research, and education. Each workshop runs for six hours over two days, and participants learn hands-on skills by shooting and editing their own videos, analyzing news stories to spot inconsistencies or bad sources, and using databases and public records to fact-check ambiguous information.

Before the workshops, however, the project began with an analysis of news stories about pesticides published in Africa between July 2019 and June 2020. Led by Professor Shelly Rodgers — with help from Associate Professor Jamie Flink, who interviewed pesticide regulators — this study gave the team a picture of the media and public opinion landscape surrounding pesticides in Africa.

“The analysis also gives us real-world examples of news coverage that can be used in the workshop trainings,” said Rodgers, the Maxine Wilson Gregory Chair in Journalism Research at the School of Journalism. “The data shows us what’s there and what’s missing in these stories, and then our workshops help people fill in the missing parts to teach them about misinformation.”

In Stemmle’s view, that approach has benefits that extend far beyond any one issue or part of the world, Stemmle said.

“This project isn’t about whether all pesticides are good or all pesticides are bad,” Stemmle said. “Our role is to be an unbiased source of information that will ultimately help regulators make informed decisions on their own. For that to happen, science communication needs to improve across the board, from news media to public agencies, and that’s true whether you’re talking about Africa or America, or whether you’re talking about pesticides or the opioid crisis.”

For a project that was intended to feature in-person instruction, the switch to a virtual setup due to the COVID-19 pandemic was not without challenges. In Kenya and Ghana, where the first workshops have taken place, mobile devices — not computers — are the dominant tools for internet access and virtual work. This means participants are completing activities like shooting videos on their phones, for instance, while receiving virtual instruction on those same phones.

But for the researchers, every challenge is an opportunity in disguise.

“We’re talking to people on the devices they are going to use to do their jobs,” Stemmle said. “While I hope to meet with these professionals in person one day, the virtual setup has encouraged us to focus on getting people more comfortable with the mobile devices they depend on. And in the process, we’re learning more about what people are looking to improve on, like their social media presence.”

This isn’t the first time Stemmle’s team at the School of Journalism has helped communities talk about sensitive science-related topics. In 2019, the team trained public health agencies in Missouri on increasing public awareness about the opioid epidemic. Like the pesticide project, this effort also featured a two-pronged approach of research and subsequent training, a process Stemmle says has been honed since its debut in 2019.

This time, however, the School of Journalism is teaming up with the College of Agriculture, Food and Natural Resources (CAFNR) for a balanced approach that emphasizes both communication and science literacy.

“A lot of the people we’re training work with farmers who often have minimal internet access, may not be fully literate and have no scientific training,” said Professor Kerry Clark, Director of CAFNR International Programs and the principal investigator on the grant. “In that situation, it’s important to know how to communicate effectively and make sure farmers are using safe levels of pesticides. The team at the School of Journalism has been crucial to helping us address those issues.”

The grant program, “Alignment of Pesticide Regulations and Standards,” aligns with other training programs that CAFNR is leading in plant and animal health, including a plan to bring scholars from Africa to the University of Missouri to conduct research and receive similar training in science communication.

For now, training sessions in more countries in east and west Africa are coming soon, with the team planning to eventually have a presence in at least 20 African countries. In the future, the researchers hope to bring similar science communication programs to Latin America and Asia, where they are currently conducting preliminary research.

“Our model can be adapted for just about any area of health or science communication,” Rodgers said. “It’s the perfect marriage of theory, practice, and broader impacts that the Missouri School of Journalism is so well known for.”