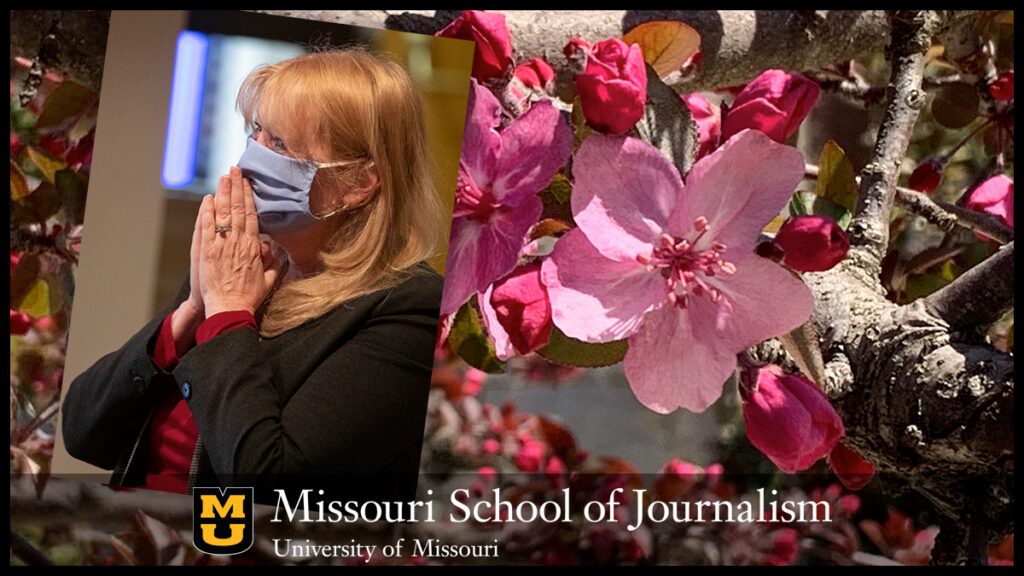 Martha Steffens is a professor and the Society of American Business Editors and Writers endowed chair at the Missouri School of Journalism.

Columbia, Mo. (April 8, 2021) — Mun Choi, president of the University of Missouri, Latha Ramchand, MU provost and executive vice chancellor for academic affairs, and Steve Sowers, president and CEO of the central region of Commerce Bank, awarded a 2021 William T. Kemper Fellowship for Teaching Excellence to Martha Steffens, a professor and the Society of American Business Editors and Writers endowed chair at the Missouri School of Journalism on April 7.

Missouri School of Journalism Dean David Kurpius joined administrators surprising Steffens by honoring her with the fellowship, which includes a $15,000 check. Kemper Fellowships are awarded to five outstanding teachers at the University of Missouri each year.

Steffens’ passion for business journalism is evident both inside and outside the classroom. Following a 30-year career in the news industry, Steffens joined the faculty of the School of Journalism in 2002. As the inaugural Society of American Business Editors and Writers endowed chair, she was initially tasked with building a business journalism curriculum at a time when most journalism students disliked taking economics courses.

Her efforts have led to a collaboration with the Department of Economics in the College of Arts and Science to establish an introductory-level economics course designed primarily for journalism majors.

Rebecca Whitworth, an assistant professor in the Department of Economics who has co-taught the class with Steffens every semester since fall 2019, noticed that Steffens brings her international experience and national reputation to class every day while creating opportunities for students to get first-hand experience writing and reporting on business and economic topics, such as creating op-eds that are submitted for possible publication in outlets like CNBC.

In addition to the economics course, Steffens also leads an upper-level business journalism course in the journalism school. There, her teaching philosophy of “real life, real rules” is on full display as she helps develop her students’ passion for business journalism by engaging them in simulated real-world environments with journalistic deadlines. Several of her former students have described the lasting impact she made on them and their careers, noting their experiences — the classes, class trips, media tours and workshops —better prepared them to enter the workforce upon graduation.

Noah C. Higgins-Dunn, who wasn’t interested in journalism until he took Steffens’ class for non-journalism majors in 2017, said he owes his former professor his career.

“Today, I am a reporter at CNBC covering the coronavirus, health and the pharmaceutical industry,” Higgins-Dunn said. “I use the fundamentals I learned from the classes I took with Marty every day, like how to parse through sometimes lengthy, dry corporate reports to find the stories that matter to Main Street and Wall Street. When I entered the financial journalism industry, I was already well equipped with the reporting know-how to excel on day one. The jargon did not come as a foreign language because I had previously used it while reporting for Marty’s business journalism class.”

Additionally, students soon realized that Steffens’ experience in the industry could help them make professional connections.

“One thing that always struck me about her class trips, media tours and workshops was that the people we met weren’t just professional journalists at CNBC, American Banker, S&P Global Ratings, Bloomberg and The Seattle Times — to name a few — they were her former students,” alumna Tracy M. Cook said. “Meeting those people, whom I saw as future versions of me and my classmates two, five or 10 years after graduation, made my goals seem all the more reachable. Seeing that representation in the form of students who literally were in my seat not that long ago made my dreams all the more realistic.”

And Steffens’ interest in her students’ careers doesn’t end at graduation.

“She is someone to this day I know I can call with any dilemma, and I can say this having graduated from Mizzou more than a handful of years ago,” said alumna Allison Prang in her nomination letter. “She has wholeheartedly earned all accolades for her level of dedication to and all of the help she has awarded her students.”

Beyond the classroom, Steffens has trained journalists in more than 40 countries, including creating a week-long economic data immersion workshop that New York Times reporter Patti Cohen described as the “most useful I’ve ever attended.”

Steffens is a 1978 graduate of Indiana University’s Ernie Pyle School of Journalism. Prior to her academic career, Steffens was executive editor of the San Francisco Examiner, as well as the Press & Sun-Bulletin in Binghamton, New York. She also has held editing posts at the Los Angeles Times, Orange County (Calif.) Register, Minneapolis Star, Dayton Daily News and Evansville (Ind.) Courier.

The William T. Kemper Fellowships for Teaching Excellence were established in 1991 with a $500,000 gift. Kemper, a 1926 MU graduate, was a well-known civic leader in Kansas City until his death in 1989. His 52-year career in banking included top positions at banks in Missouri, Kansas and Oklahoma. Commerce Bank manages the trust fund.