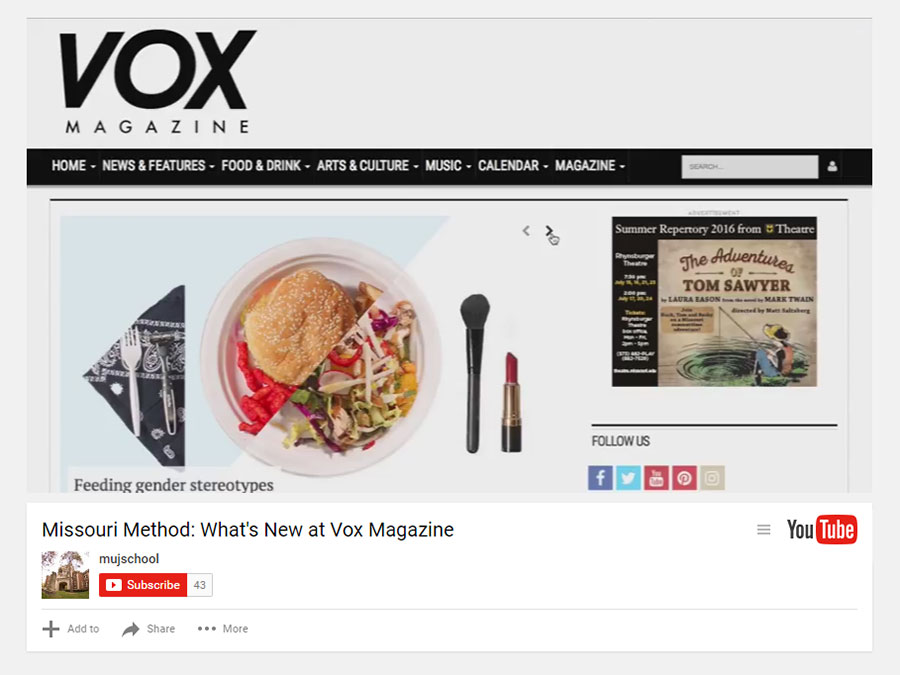 Columbia, Mo. (Aug. 2, 2016) — Aspiring movie critic Max Havey can tell you in 60 seconds if a new movie is worth seeing. The Snapchat video reviews this master’s student does for Vox Magazine spotlights mainstream blockbusters along with films from Ragtag Cinema, Columbia’s prime venue for independent documentaries.

Havey is at a movie theater at least twice a week. His personal interest lies in “darker, more interesting, more complex, thought films” that were made not for drawing audiences but to tell a compelling story, he says. This voracious film lover has almost 300 diary entries on Letterboxd.com, a social network on film criticism.

The Snapchat movie reviews are more of a game, he says, and he does almost all of them on the go. It all started from a goofy joke early in summer semester. Havey had a contemplative look on the face that visually summed up his overall impression of “The Lobster.” Hannah Pederson, the managing editor of Vox, snapped a photo of Havey. She shared it on Twitter and the idea was born after other staffers got a peek. Havey is one of several Vox reviewers, including Jared McNett and Keeley Dority, creating Snapchat reviews.

Havey says Snapchat reviews are more succinct, unlike the 600-word summaries he used to write. “They make me very distilled about what I am trying to say. Sometimes, I forget things, or I remember something after the fact, but I rarely write things down, and I usually just go.”

Within a half-an-hour after the movie, Havey is up on Snapchat from his apartment. Once Havey decides on a 1-to-5 star rating and puts his iPhone in the video mode, he is ready to roll.

“Snapchat is a way to reach out to the community in really small ways, but they feel special about it,” he says. “Giving people a sense of an event they couldn’t go to and getting the general sense of the scene is very neat. It gives people little snapshots of moments they can’t experience otherwise.”

Dariya Tsyrenzhapov is a master’s student at the Missouri School of Journalism.