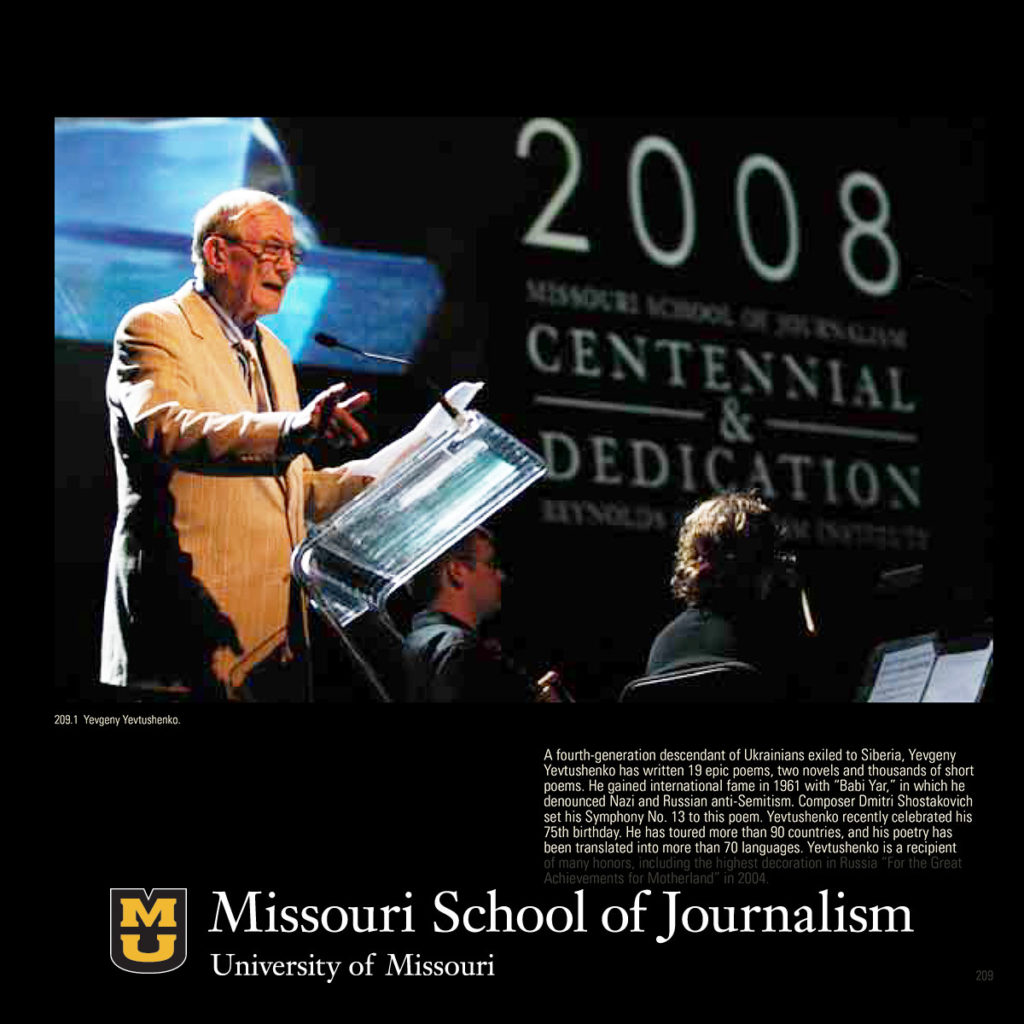 The New York Times reported the death of Russian poet Yevgeny Yevtushenko on Saturday, April 1. Yevtushenko performed “The Lead Honorarium,” a poem he wrote in honor of the 2008 centennial of the Missouri School of Journalism and the dedication of the new Reynolds Journalism Institute. The poem was dedicated to five courageous Russian journalists, each of whom paid the ultimate price in their attempt to expose the truth. Yevtushenko’s dramatic reading of “The Lead Honorarium” in both Russian and English was featured as a part of the closing ceremony for the centennial/dedication.

Dedicated to the memory of Russian journalists.

Today the spirit of petty pet-poets, not too rebellious.
They squeak – not bark.
The civic rage is an orphan,
adopted by the last bold jouгnalists,
no longer by the favorites of muses.

Today in Russia, more than the halos of icons,
we see the purest radiance
of some laurel-less heads.
I am talking about Dima, about Yuri, about Anya.
The lead bullets,
poison in the tenderly-bubbling champagne,
this is the price of their dangerous words.

But many brave young reporters
are doomed to be unknown.
Their quills and lenses stick out
in the provincial quagmire.

What if everyone with unglued lips
will be killed,
and those who survive,
will only flatter and safely shut up?

There are no bad countries in the world.
But there are no crookless ones.
Where is Artiom Borovock?
Where is the preacher Men?
I repent; I dislike harmless petty pet poets.
From a thousand squeaks
you couldn’t make even a lonely roar.

When in the weak soul of power
hides the fear of the powerful Word,
in each country,
drowning in sands,
or in snowdrifts,
there is pre-poison-ness taste in the air,
there is pre-shot-less,
pre-leaded smell of fear,
there is a new Babi Yar,
Yar of the killed journalists.

But unexpectedly, somewhere,
probably in Russian little town Odinzovo
which means Loneliness,
one utterly lonely girl,
raises her fragile lonely quill against mobsters,
and her hopelessness – is our last hope!

Is her mother doomed to mourn her,
kissing her cold dead freckles,
which never will dance anymore
on her childish cheeks with dimples?

Written in Moscow, April 2008.
Translated from Russian by the author and his son Yevgeny Yevgenevich Yevtushenko.