Columbia, Mo. (July 1, 2009) — Brian Brooks, associate dean for undergraduate studies at the Missouri School of Journalism, is one of five who will be inducted into the Missouri Newspaper Hall of Fame in October. The program will be held during the Missouri Press Association‘s 143rd annual convention.

Also to be inducted into the 19th class on Friday, Oct. 16, are two alumni and two recipients of the Missouri Honor Medal for Distinguished Service in Journalism.

The association presents Pinnacle Awards to Hall of Fame inductees. Plaques with their likenesses will be hung in the conference room at the association offices in Columbia and in the student lounge of Lee Hills Hall at the School. The Missouri Press Association, founded in 1867, is the newspaper trade organization in the state.

Brian Brooks joined the Missouri journalism faculty in 1974 after working in Vietnam as an information officer, for which he earned a bronze star, and as a reporter, copy editor and night city editor at the Press-Scimitar in Memphis. Brooks served as news editor and then editor of the Columbia Missourian before becoming director of the journalism network in 1989. He and faculty member Phill Brooks brought a $15 million grant from IBM Corp. to the School of Journalism.

While on sabbatical from 1997 to 1999, Brooks was editor of The Stars and Stripes, the U.S. military newspaper in Europe. He directed that newspaper’s coverage of the Bosnia mission, the U.S. entry into Kosovo and the bombing of Belgrade. For this work he received the U.S. Department of Defense Civilian Distinguished Service Medal. 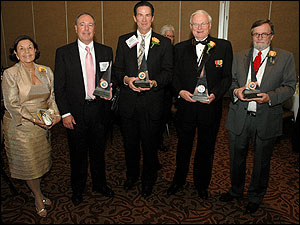 For more than 30 years Brooks has served as deputy director or director of the Dow Jones Newspaper Fund editing internship program at Missouri. Students from schools nationwide are trained at the summer workshop for careers as newspaper copy editors.

Brooks is the author or co-author of four major journalism textbooks, including News Reporting and Writing. He was chairman of the school’s editorial department from 1999 to 2003, when he became associate dean for undergraduate studies and administration. That same year he was named Outstanding Faculty member on campus by the MU Greek system. In 2001, he received the Mizzou Alumni Association‘s Faculty-Alumni Award.

Lucile Bluford joined The Call in Kansas City soon after graduating in 1933 from the University of Kansas with a degree in journalism. She had been a summer intern at The Call during her college years, and had earned the respect of the paper’s founder, Chester A. Franklin, and its editor, Roy Wilkins. Her work as a police reporter, photographer and writer earned Bluford the position of managing editor after Wilkins’ departure in 1937. She was just 26 years old. She later became The Call’s editor.

Bluford wanted to attend the graduate school in journalism at the University of Missouri, but at the time the university did not accept African-Americans. Bluford sued the university. After losing two court decisions, she withdrew her case and got on with her newspaper work.

It took several decades, but the university did acknowledge Bluford’s distinguished career. In 1984, she received the Missouri Honor Medal for Distinguished Service in Journalism.

In 1989, the university bestowed upon her the honorary doctorate of humanities degree. The Board of Trustees’ citation read in part: “You fought valiantly to integrate the University of Missouri as you were to fight for integration for all areas of American life. We are embarrassed that you lost the battle at this university, but today we are proud to add you to our list of laureates at long last.”

David Bradley Sr. was chairman of the board and chief executive officer of the St. Joseph News-Press & Gazette Co. and founder of St. Joseph Cablevision. He died in 1988 at the age of 70.

Bradley founded St. Joseph Cablevision in 1965 and expanded the newspaper’s holdings to include television stations in Georgia, Mississippi, South Dakota and North Carolina. He was active with the Associated Press and served three terms as a director, from 1970 to 1979. He represented the AP at the African-American Conference in Africa in 1978 and was part of a delegation of AP directors who made a goodwill visit to China in 1977.

Bradley was a member and officer of several national newspaper and journalism organizations. He was active in St. Joseph civic and business organizations and insisted that his newspapers take an active role in the community. In 1982 he received the Missouri Honor Medal for Distinguished Service in Journalism.

Frank Martin III, BJ ’71, is the grandson of Frank Lee Martin, the second dean of the Missouri School of Journalism. He joined the family newspaper, the West Plains Daily Quill, as managing editor in 1975 after graduation from the Missouri School of Journalism and four years working for the New Orleans Times-Picayune. He became editor, publisher and president of The Quill in 1983.

Under Martin’s leadership, The Quill has earned many awards and recognition for excellence in journalism. Martin also has been recognized for his civic work outside the newspaper. In its October 2000 issue, George magazine published a lengthy article about Martin in its Citizen of the Year issue, calling him “The Bravest Newsman.” It presented him with its George Award for a campaign against hate groups.

After W. Ray Vickery, BJ ’61, earned his journalism degree while attending the university on basketball and Navy scholarships, he flew jets off aircraft carriers during the Vietnam War in the 1960s.

In 1969, Vickery joined his parents at The Salem News. He later became the owner and publisher of the weekly and retired in 1998. Vickery served as president of Missouri Press Association in 1990 and visited virtually all 300-member newspapers of the association. He died of cancer at age 67 on Dec. 1, 2006.