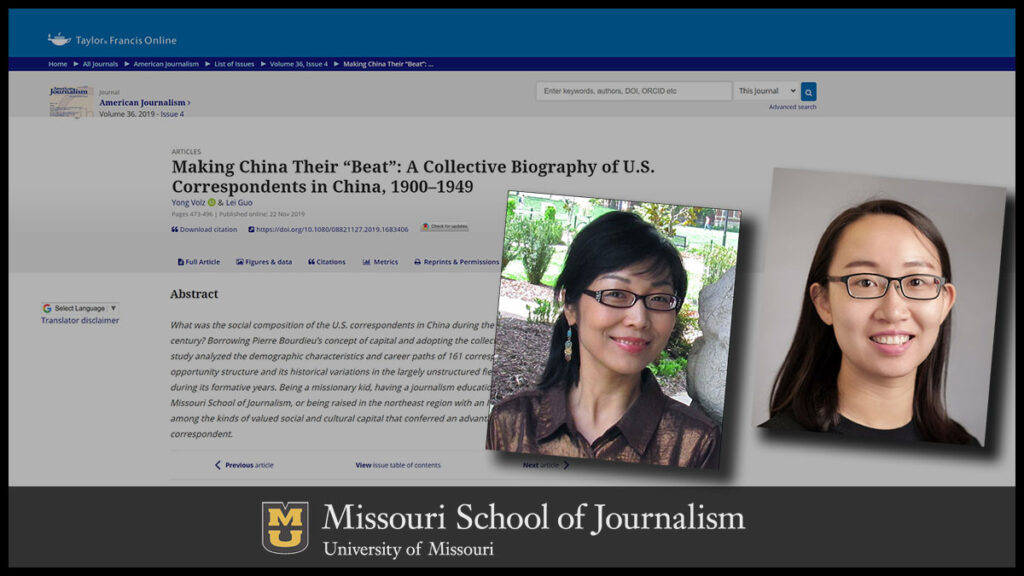 Columbia, Mo. (Oct. 8, 2020) — The Americans who made their way to China during the first half of the 20th century to become foreign correspondents came from many walks of life to get there.

Despite being from socially less advantaged groups at the time, women, those from farm communities, and others with limited work experience, made up a portion of the foreign correspondents in China, according to research by scholars from the Missouri School of Journalism.

These findings and others were published in the research paper “Making China their ‘beat’: A collective biography of U.S. correspondents in China, 1900-1949,” in American Journalism, an official publication of the American Journalism Historians Association. The authors, Associate Professor Yong Volz and Lei Guo, PhD ’20, studied the demographic characteristics of 161 U.S. correspondents to learn about the social composition of this early group.

“From a sociological perspective, their own social positioning such as gender, class, education and nationality contributes to the particular way they cover the world,” noted the researchers in the paper. “It is important, therefore, to examine the social composition of foreign correspondents in order to better understand how the meaning of the world has been constructed and represented at different points in history.”

Unfortunately, there are fewer and fewer foreign correspondents now in the 21st century as newsrooms face budget cuts and have to close overseas bureaus. Instead, oftentimes reporters come in for a short time as “parachute journalists” or rely on social media to help with reporting on international stories.

As they studied this group, the researchers learned that many early correspondents ended up spending decades in China, which gave them time to develop expertise on China and to share their insights with the American public. Nowadays, the field has become “a formal system that perpetuates narrow, elite perspectives in the reporting of international news.”

“This research reminds the news industry that having more journalists from a wider range of backgrounds can help to broaden the perspectives and issues addressed in international news,” said Volz. “Allowing correspondents to immerse – rather than parachute – into a different culture of other countries, is instrumental in informing public opinions and international relations.”

“In a way, they forced China onto the attention of the otherwise indifferent American readers by constructing China as America’s ‘Manifest Destiny’ in the East,” noted the researchers.

Volz plans to continue studying foreign correspondence in China in the first half of the 20th century by looking at a few American female journalists who covered the country in the 1920s and 30s. She said they were largely forgotten by those in the U.S. She also wants to study American “freelance correspondents” in China today.

“Today’s news environment does not seem to be conducive to restoring overseas news bureaus, but I would certainly argue that it still creates opportunities for young, adventurous entrepreneurs to pursue careers as a different kind of foreign correspondent,” said Volz. “They may be self-employed, but they can use their social media or other emerging outlets to report from the field.”