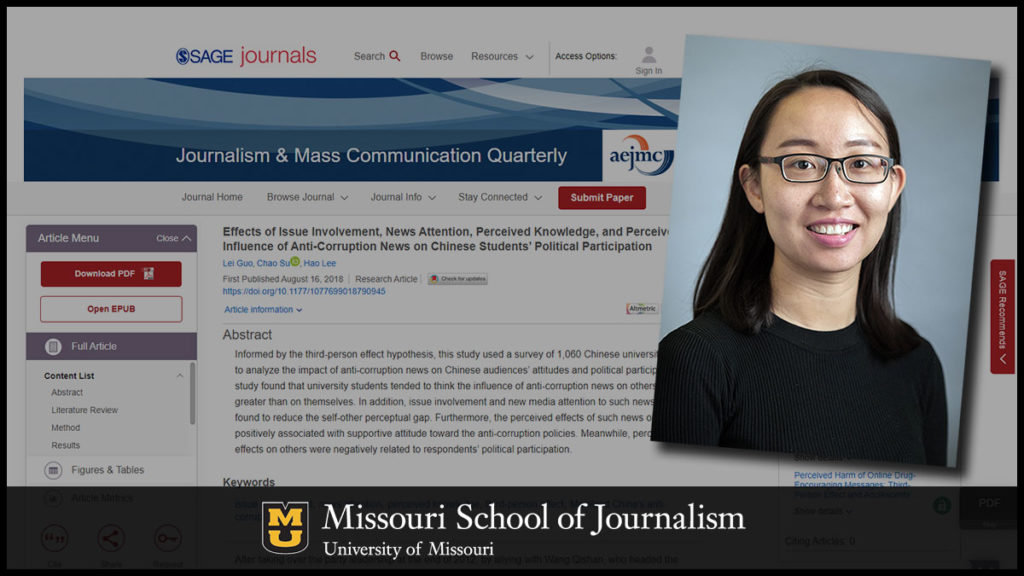 Doctoral student Lei Guo’s research led her to conclude that the anti-corruption movement in China was influential because “it went far deeper and lasted far longer than anyone could imagine.”

Many students believed mass media would be more influential on others; only 30 percent had good understanding of anti-corruption movement.

Columbia, Mo. (Nov. 15, 2019) — As an anti-corruption movement took place in China, researchers including Missouri School of Journalism doctoral student Lei Guo, were curious to learn about the impact that news coverage about the influential movement was having on the public.

For research purposes, they were particularly interested in how the coverage of Chinese officials’ corruption cases and the central government’s anti-corruption policies impacted people’s attitudes towards the movement, the government, and their political participation, said Guo.

According to Guo, the media in China “plays an important role as the mouthpiece for government propaganda.” The anti-corruption movement was influential because “it went far deeper and lasted far longer than anyone could imagine,” stated the research paper.

To satisfy their curiosity, Guo embarked on a research study to learn more by interviewing 1,060 Chinese college students using a hypothesis known as the third-person effect hypothesis, which states that other people will be more impacted by mass messages. This is often found to be the case in controversial messages including pornography and propaganda, said Guo.

According to “Effects of Issue Involvement, News Attention, Perceived Knowledge, and Perceived Influence of Anti-Corruption News on Chinese Students’ Political Participation,” about 70 percent of the participants believed news about the movement would impact others more, she said.

For the research, Guo, a former political journalist from Hong Kong, was joined by graduate students Chao Su and Hao Lea of The Chinese University in Hong Kong. The paper was published in Journalism and Mass Communication Quarterly journal.

Guo said considering the influence and importance of the movement, her team wanted to help the international community better understand the cause of the movement and the impact of movement on people’s behaviors and attitudes.

“It’s important for the international community to understand this movement because it has significant impact on political, economic and diplomatic development in China,” said Guo. “And it might have influences on their policy toward China.”