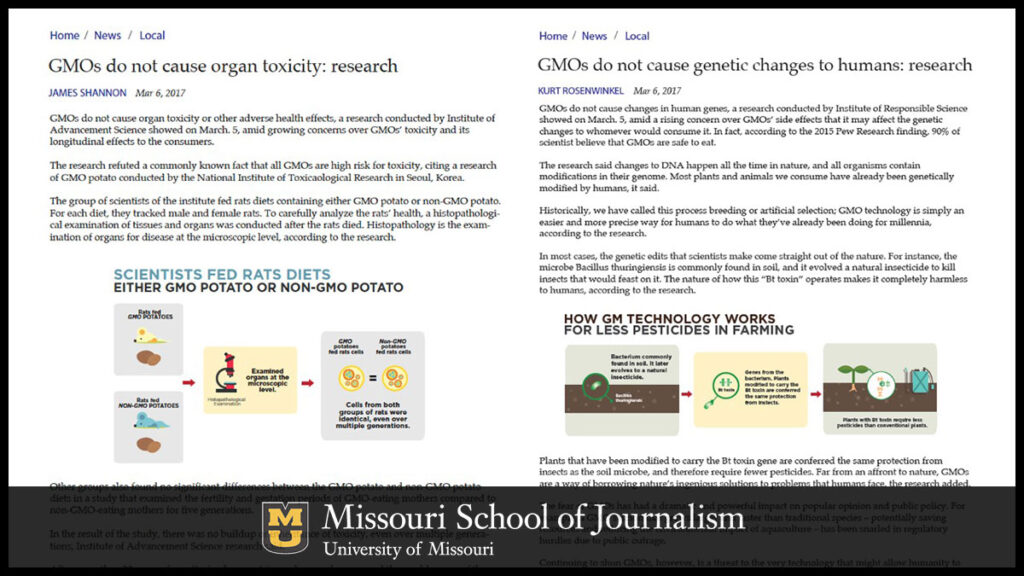 Columbia, Mo. (Dec. 3, 2020) — For more than two decades, scientists and the general public have disagreed on the safety of consuming genetically modified, or GM, foods. A recent survey showed that while a majority of scientists agree GM foods are safe, only one-third of the general public considers them safe as well.

Using this controversial health topic, researchers at the University of Missouri School of Journalism’s Psychological Research on Information and Media Effects, or PRIME, lab studied the effectiveness of how visuals, such as photographs and infographics, can help journalists translate science-based health news to a general audience in order to help people make informed decisions.

“Infographics are not effective for everyone because in order for infographics to work, you have to read and follow the visual information, as compared to just looking at a picture,” said Namyeon Lee, a doctoral student in the School of Journalism and the study’s co-author. “We also found infographics were especially effective about informing people about GMs, such has how GM foods are created, as long as the readers didn’t have pre-existing attitudes about the subject matter.”

Researchers randomly assigned more than 300 study participants three GM news articles to read – presented with either text with a photo, text with infographics, or text only – and, after reading each article, asked each participant to respond to questions about their risk perception of GM foods, similarities between GM and non-GM foods, and attitudes toward GM foods.

“Before our study, we noticed that a lot of news articles and reports about GM food often used photos that could be considered by many as scary, and previous related studies also found internet searches for GM images often resulted in fear-based results,” Lee said. “So, we wondered whether the way the message is presented in news articles would help the audience focus more on the scientific research findings, instead of purely reacting to their emotions.”

Although their study focused on a specific health topic, co-author Sungkyoung Lee, an associate professor in the School of Journalism and director of the PRIME lab, said the results should encourage journalists to consider using visuals in their news articles to help people understand complex scientific information.

“In order to help people understand a difficult scientific topic, journalists need to have some sort of visual to help their audience access that information,” Lee said. “But, while visuals are needed to accompany the story, emotionally based visuals can distract from the content of the story and lead to false assumptions even before the audience views the news article.”

“Effects of message presentation type on GM food risk perception, similarity judgment, and attitude,” was recently published in Health Communication. MU doctoral student Ciera Dockter was also involved with the study. Funding for the study was provided by the Richard Wallace Faculty Incentive Grant Award from the Mizzou Alumni Association.