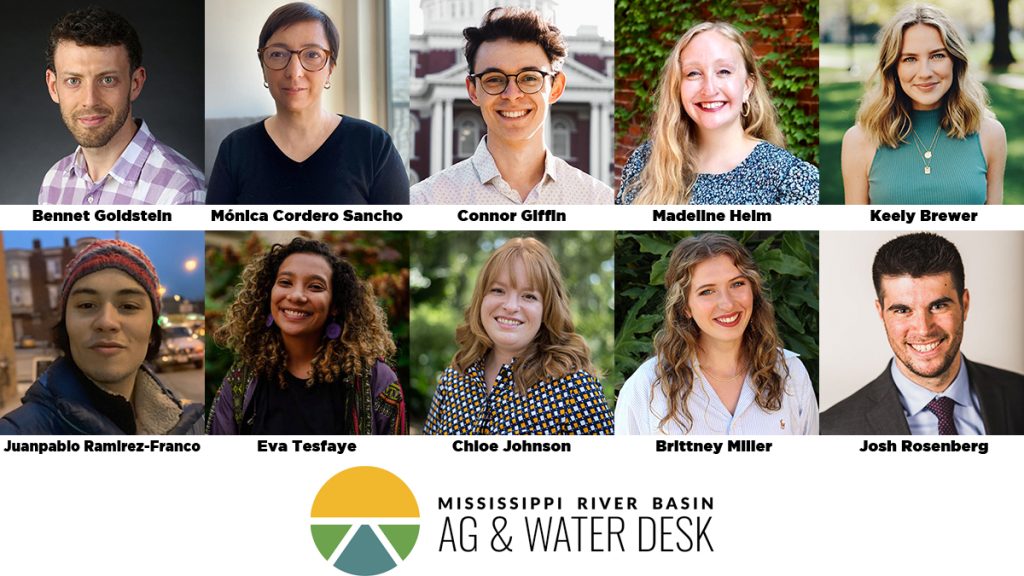 The journalists are corps members with Report for America, a national journalism service program. The reporters begin work June 1, covering individual beats for their host newsrooms. They also will work on regional and national projects with the Ag & Water Desk, a collaborative reporting network focused on water, agriculture and environmental issues across the Mississippi River Basin. The Desk is based at the Missouri School of Journalism.

“We are so excited to have such a talented group of reporters joining the Desk to cover important environmental issues in the Mississippi River Basin,” said Editorial Director Tegan Wendland. “Along with their local editors, we anticipate producing impactful, meaningful stories about everything from environmental justice and industrial development to nutrient runoff and coastal land loss.”

All content produced by the Desk will be distributed for news outlets to publish free of charge. Reporters will receive ongoing training, mentorship, and expenses-paid travel to the annual conference of the Society of Environmental Journalists, in addition to other benefits.

Goldstein has worked for the Omaha World Herald in Nebraska and daily papers in Iowa, including the Dubuque Telegraph Herald. Goldstein’s work has garnered awards including the Associated Press Media Editors award and an Iowa Newspaper Association award. He holds a master’s degree from the University of Wisconsin-Madison.

Cordero’s work has been published by Univision, Bloomberg Businessweek, La Noticia, Radio Ambulante, NPR, openDemocracy and The New York Times. Born in Costa Rica, she is a graduate of the University of Costa Rica and the Craig Newmark Graduate School of Journalism at the City University of New York. Cordero was part of a team that won the 2020 Ortega y Gasset Journalism Award, the most prestigious journalism prize in the Spanish-speaking world, for best investigative reporting.

While earning his bachelor’s degree at the University of Missouri School of Journalism, Giffin contributed to “Lost on the Frontline,” an award-winning collaborative project from Kaiser Health News and The Guardian documenting the deaths of frontline health care workers during the pandemic. He also reported on state government and the environment for the Columbia Missourian.

Heim previously reported on health and science for the Appleton Post-Crescent and the USA Today network in Wisconsin. Her coverage of the pandemic earned top honors from the Wisconsin Newspaper Association. She holds degrees in journalism and creative writing from the University of Wisconsin-Madison, where she was editor-in-chief of The Daily Cardinal. Heim has interned at the Wisconsin Center for Investigative Journalism and reported for the Winona Daily News in Winona, Minnesota.

Brewer is a recent graduate of The University of Alabama, where she earned a bachelor’s degree in news media and served as editor-in-chief of The Crimson White. While there, Brewer launched a campus investigation into COVID-19 reporting tools in partnership with the Poynter Institute. She interned at The Tuscaloosa News and has reported on the impact of faith-based diabetes programs at the Mississippi Center for Investigative Reporting.

Ramirez-Franco covers water quality and climate change in the region north of the Illinois River.  He has also been a bilingual facilitator at the StoryCorps office in Chicago. As a civic reporting fellow at City Bureau, he produced print and audio stories about the Pilsen neighborhood. Before that, he was a production intern at the Third Coast International Audio Festival and the rural America editorial intern at In These Times magazine. He is a graduate of Knox College.

Tesfaye was a producer at NPR’s daily science podcast “Short Wave.” As an NPR Kroc fellow, she produced for “Weekend Edition,” reported for NPR’s national desk, helped start a podcast about the federal executions carried out under the Trump administration for NPR member station WFIU, and reported from Birmingham, Alabama, for the Gulf States Newsroom. Tesfaye joined NPR after graduating from Columbia University with a bachelor’s in English and a minor in French and Francophone studies.

Previously, Johnson reported on the environment and climate change for The Post and Courier in Charleston, South Carolina. She started her career at The Sun News in Myrtle Beach, South Carolina, and holds a journalism degree from American University. Her work has been recognized by the Scripps Howard Foundation and the Society for Features Journalism and she was a finalist for the Pulitzer Prize.

Miller earned a master’s degree in science writing and communication from the University of California, Santa Cruz. There, she wrote about science for Nature, Knowable Magazine and the Monterey Herald, and she was named a fellow at The Council for the Advancement of Science Writing. Miller holds bachelor’s degrees in biology and journalism from the University of Florida.

Rosenberg reported on federal tax policy for the legal newswire Law360, tracking down stories in the halls of Congress before moving into a more features-oriented role. As a 2014 Teach For America corps member, he taught high school history in Indianapolis. Rosenberg hails from Roxbury, New Jersey, and he earned his undergraduate degree in history and secondary education from William Paterson University, and holds a master’s degree in public affairs from Brown University.

About Report for America

About the Ag & Water Desk

The Mississippi River Basin Ag & Water Desk is a collaborative network of journalists focused on increasing coverage of agriculture, water and environmental issues surrounding one of the world’s major river systems. This editorially independent initiative is funded by a three-year, $1.4 million grant from the Walton Family Foundation. The project is led by Executive Director and Associate Professor Sara Shipley Hiles and advised by Associate Dean Earnest Perry, and Associate Professor and News Director at KBIA, Ryan Famuliner.