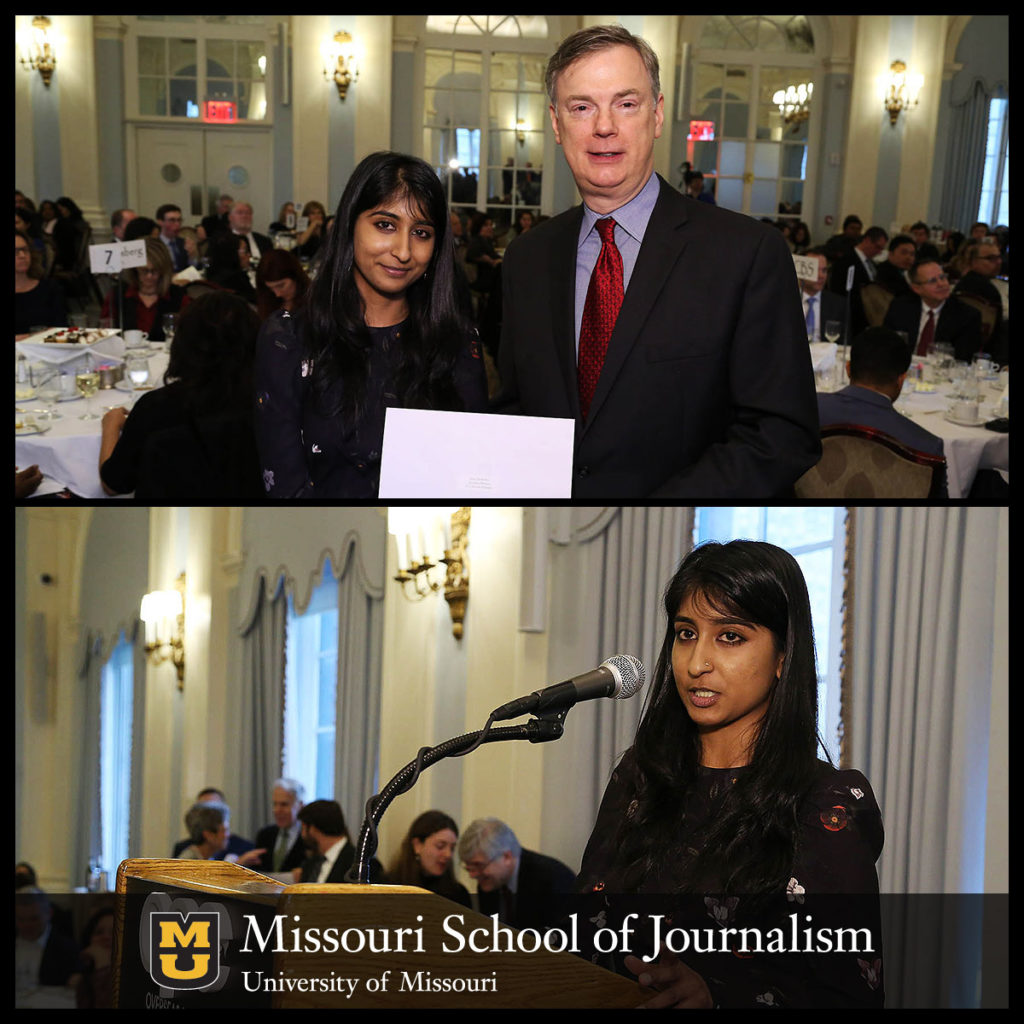 New York City (March 21, 2018) — Suman Naishadham, a journalism graduate student at the University of Missouri, received an Overseas Press Club Foundation Scholar Award at the Foundation’s 2018 Annual Scholar Awards Luncheon held at the Yale Club in New York City. Jeff Glor, anchor of the CBS Evening News, was the keynote speaker. Naishadham was among 16 aspiring foreign correspondents selected by a panel of leading journalists from a pool of 175 applicants from 50 different colleges and universities.

Naishadham was the recipient of the H.L. Stevenson Fellowship. She received the award from Steve Swanson, OPC Foundation treasurer.

Having spent a year as a freelancer and staff reporter in India, Naishadham is fascinated by the differences in local and foreign coverage and how that plays out in the digital age. An NYU grad, she wrote about Chikur Balaji, the so-called “visa temple,” where young Indians pray for H-1B visa approval, the program that allows highly-skilled foreign professionals to work in the U.S. Bilingual in Spanish and English, with some proficiency in Urdu and Italian, Naishadham also has an OPC Foundation fellowship in the Reuters bureau in Mexico City.

Award winners were also honored with a reception at Reuters the night before the luncheon, hosted by Reuters senior staff. On Saturday they received risk management and situational awareness training from Global Journalist Security at CUNY Graduate School of Journalism. They also met privately with editors and freelance journalists in a special breakfast held the morning of the awards presentation and at a post-luncheon panel.

About the OPC Foundation

The OPC Foundation is the nation’s largest and most visible scholarship program, encouraging aspiring journalists to pursue careers as international correspondents. Media organizations at the luncheon included AP, Bloomberg, CBS News, GroundTruth Project, Reuters and The Wall Street Journal. For more information on the OPC Foundation and its scholarship/fellowship program, visit the OPC website.