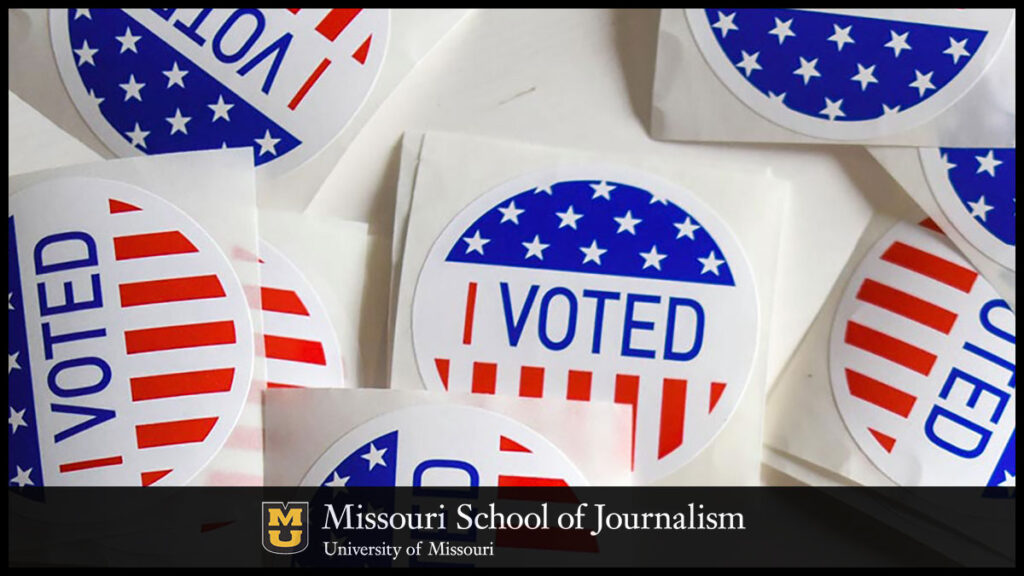 Missouri students Greta Serrin, Fiona Murphy, Tina Tan and Reagan Loftus worked with The Columbia Missourian to remind younger voters that engaging with local initiatives on the ballot is a public service to our democracy.

Columbia, Mo. (May 28, 2020) — Sharing election coverage online can feel like a huge task, especially after spending all the time before the election writing voter guides and figuring out what you’re going to focus on as a newsroom. That doesn’t mean digital strategy should go by the wayside. To reach a potentially untapped audience for election coverage, you have to strategize.

That’s exactly what our client, the Columbia Missourian, wanted. The editors wanted to remind younger voters that engaging with local initiatives on the ballot is a public service to our democracy. The Missourian, which is managed by professionals and produced by students at the Missouri School of Journalism, does a great job creating long voter guides in its print edition. But it struggled in making it easily shareable and digestible online.

That’s where we came in. We created an “all-encompassing social media campaign” for the 2020 election season.

Our strategy included using a calendar to break up information in voter guides so not to overwhelm viewers. We spaced the Missourian’s voter guide through the month before Election Day. By branding content and using specific days for breaking down the ballot, we found that viewers will expect, and rely on, learning issues and candidates on the ballot before the big day. We used Mondays as a “Get to Know Your Candidate Mondays” and Thursdays as a “What’s on the Ballot Thursdays.”

It’s important for voters to know the basic information before the election season started, so we ran a test video for the Missourian’s Facebook and Twitter in March where it described the big election dates in Missouri and what people are voting for in each primary and municipal election.

We found that people want simple questions answered. For example: “Why do I have to go to the polls four times this year?” The Missourian received almost 1,000 views on Facebook within a week of releasing the video, marking it one of the most viewed on its Facebook, and more than 600 total views on Twitter. We also experimented with an Instagram story the day before the primary. These stories received upwards of 700 views which aligns with the newspaper’s average Instagram audience engagement.

Establishing a voice on social media can feel like learning a new language. From our content creation over the past several months, we noticed some preferences and trends applicable to any newsroom venturing into the socially digitized world.

For Instagram specifically, our team saw significant audience engagement when utilizing “question” or “polling” features in our stories. This is also a good way to begin collecting data on what the audience likes to see. Use these features to ask your audience the questions they might have about the election. On average, for most of our multi-slide story posts, the Missourian was able to retain 80 percent of views from the first slide to the last. In addition, the audience was more likely to stay if the stories included interactive features. We also found the most views came from our Instagram stories that had a news hook and not a feature story one.

You know the news, so don’t be afraid to try new things on social media. It’s the new way newsrooms have direct contact with audience members.